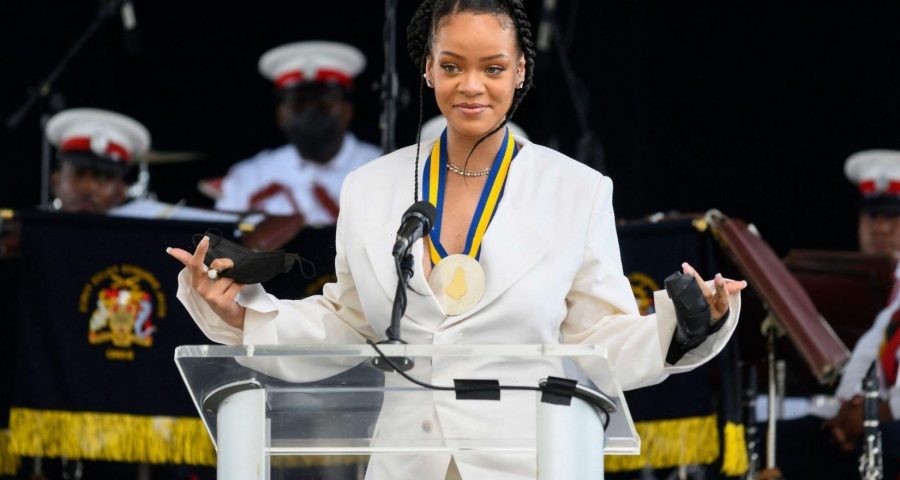 Written by Naomi May

Rihanna, the newly anointed National Hero of Barbados, took to the stage in the white two-piece of dreams.

Fittingly for her newly christened National Hero of Barbados title, Rihanna proved that her fashion too is as deserving of praise as … well, herself.

Rihanna wearing a cashmere skirt suit by Maximilian in Barbados.

In short, Riri understood the assignment. Here’s a woman that knows that clothes telegraph meaning: after wearing a copper-coloured Bottega Veneta slip dress as she became the 11th person to be bequeathed the National Hero of Barbados title last night, for today’s ceremony, Ri wanted to fly under the radar and let her home country’s new-found independence shine bright.

Rihanna wearing a slip dress by Bottega Veneta in Barbados.

This isn’t the first time Rihanna’s worn Maximilian. In recent weeks, the Fenty Beauty founder has sported a string of the style czar’s looks, most notably a head-to-toe scarlet ensemble, which she wore for date night with A$AP Rocky.

Not only has she been an official ambassador for culture and youth in the country since 2018, but Rihanna is only the second woman to have ever received the title of National Hero, second to religious leader Sarah Ann Gill.