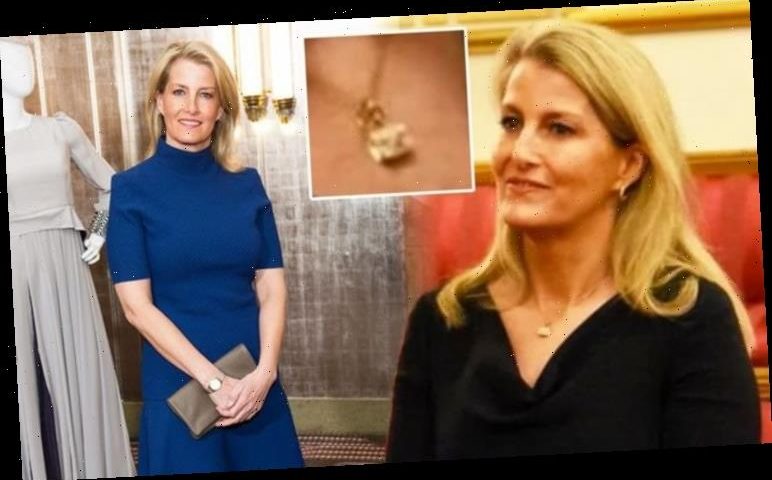 Sophie, Countess of Wessex is the wife of Prince Edward, 56, and a working royal. Since becoming a royal, she has attracted attention through her tiaras, rings and necklace collections.

Sophie and Prince Edward married at Windsor Castle on June 19, 1999.

On the big day, the mother-of-two turned heads wearing the Anthemion tiara.

She paired this with a pearl necklace and earring set which was a gift from Prince Edward.

The Countess of Wessex has since worn many pieces of eye-catching jewellery.

In fact, the royal is believed to have a jewellery collection reportedly worth more than £3million.

While Sophie has worn lots of pricey and lavish jewels in the past, she is also the owner of more subtle jewels.

The subtle jewel could have had an “empowering” message, according to Claire Adler, jewellery specialist and founder of Claire Adler Luxury PR.

She stated: “There is something undeniably feminine and empowering about a handbag.”

The specialist explained the piece is likely to be rare as there are not many similar designs around.

The minaudière bag featured on the pendant may have also given a nod to the Royal Family as similar styles have been carried by royals.

“Handbag pendants aren’t as common as one might think although there are a fair number of lovely vintage examples online,” Claire continued.

“Sophie’s one looks like it is gold with pavé diamonds.

“Interestingly, handbags have a long history of being linked to royal jewellery through the minaudière.

“This is a bejewelled evening handbag and a jewel all rolled into one – like those by Van Cleef & Arpels, the Parisian jewellery house worn by Kate Middleton to the Baftas.”

Royals including the Duchess of Cambridge have carried minaudière over the years, and the designs are usually made with luxurious materials.

Claire continued: “They are made with precious materials, like gold, enamel and precious gemstones, and appear really compact.

“But then with a click or two, secret compartments unfurl for lipstick, powder compact and even clocks.

“Always useful for keeping the true extent of your vanity and organisational skills under wraps until the situation requires them.”

Like many in the Royal Family, Sophie will often attract attention with her outfits and jewellery she steps out.