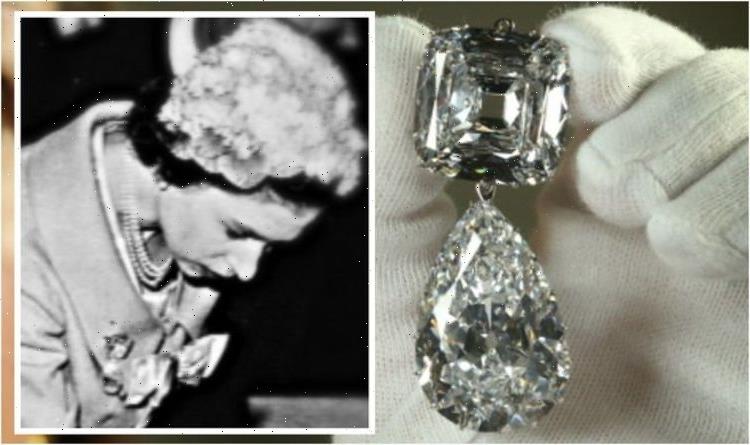 From huge, flawless diamonds to magnificent rubies, sapphires, and pearls, the Queen’s jewellery collection features some of the world’s most eye-catching pieces. It is thought she owns over 98 incredible brooches which are not only extremely high value but also have special meanings behind them. Fine jewellery and engagement ring experts at Steven Stone took a close look at the most iconic brooches from the Queen’s collection to reveal the estimated value and the heart-warming story behind them.

The Queen’s Cullinan III and IV brooch is Her Majesty’s most expensive brooch according to the experts, costing roughly £50million.

Claire Adler, founder of Claire Adler Luxury PR which specialises in working with jewellery clients, spoke exclusively to Express.co.uk about the Queen’s brooch.

She said: “A mixture of tradition and style, Her Royal Majesty has worn a vast array of brooches over the years.

“Through each choice, this distinct accessory is meticulously paired to suit each of the Queen’s royal engagements, and her choice in brooch conveys meaning through its historical context and provenance.

“For example, the Cullinan III and IV brooch, which is the most valuable in the world, let alone in the Queen’s collection, has been worn on average once every decade,” the expert said.

Claire continued: “Extracted from the famous Cullinan diamond found in 1905, these two substantial diamonds, pear-cut and square-cut respectively were used as gems for Queen Mary’s tiara.

“Inherited by Queen Elizabeth II in 1953 and as an act of respect and gratitude to the makers themselves, the Queen wore it on a State visit to Holland in 1958.

“During her trip, the Queen visited the Asscher workshops and unpinned it, handing it to Louis Asscher, who himself was present as his brother cut the original Cullinan diamond, recognising the shared sentimental and historical value.”

He said: “Queen Elizabeth has some of the most incredible jewels I’ve ever seen.

“Whilst it’s no doubt difficult to put a price on them, as they come with so much history and legacy, after analysing the gemstones from 25 of her most iconic brooches, I’d roughly estimate them to be collectively worth over £90million.”

Max estimates the Cullinan III and IV brooch to be £50million, making it the most expensive of all the Queen’s brooches.

He added: “The biggest and most expensive of all Queen Elizabeth’s brooches is the Cullinan III and IV brooch.

“This is because it features two large stones cut from the Cullinan diamond – the world’s largest diamond ever found.

“This one brooch alone is worth around £50million.”

The Cullinan III and IV brooch is made of the third and fourth largest stones cut from the famous Cullinan Diamond.

The jaw-dropping 3,106-carat uncut diamond was presented to King Edward VII in 1907 and was cut by Joseph Asscher in Amsterdam the following year.

Whilst the two largest stones cut from the diamond are set in the Sovereign’s Scepter and the Imperial State Crown, the pear-shaped 94.4-carat Cullinan III and the square-cut 63-carat Cullinan IV were presented to Queen Mary by the Government in 1910.

In 1911, she commissioned Carrington and Co. to make a platinum brooch setting for the stones.

In 1953, Queen Elizabeth inherited the brooch, however does not wear it very often.

In 1959, she loaned the brooch to London’s Ageless Diamond exhibition.

By 2012 it was part of another exhibition at Buckingham Palace to celebrate the Queen’s Diamond Jubilee.