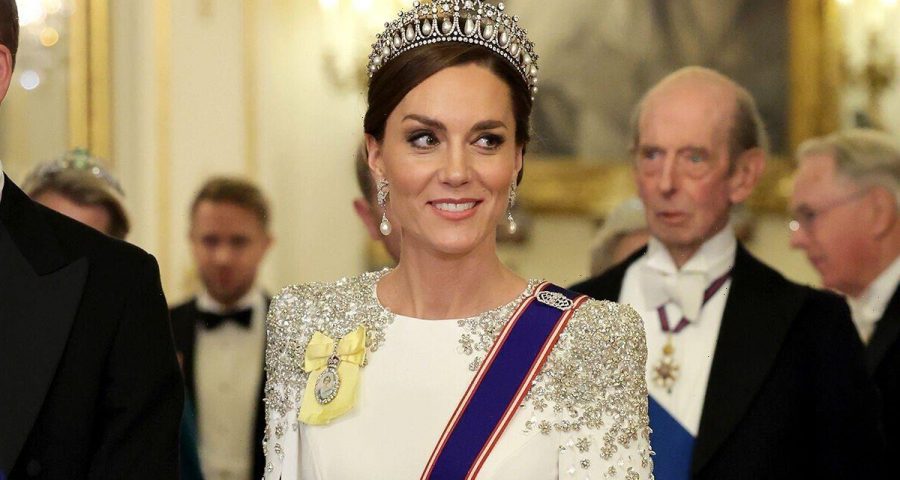 The Royal Family pulled out all the stops on Tuesday for the State Visit of South African President Cyril Ramaphosa, and a State Banquet was held in the evening by King Charles at Buckingham Palace. Also in attendance was Queen Camilla, Kate, Princess of Wales and Sophie, Countess of Wessex, and all wore some show-stopping jewellery for the occasion.

While the Princess of Wales could have decided to wear a new tiara to mark the start of King Charles’ reign on Tuesday night, she proved her loyalties to one particular diadem were still strong.

Kate dazzled on Tuesday night in a whimsical pearl diadem known as the Lover’s Knot Tiara, which has previously been worn by Princess Diana and the late Queen when she was young.

Dangling pearl drops are suspended in diamond loops, while extra diamonds adorn the top and headband of the diadem.

The Lover’s Knot Tiara has become Kate’s most-worn royal tiara since she married Prince William in 2011, and she’s donned it for countless royal banquets and state occasions.

While all royal tiaras are particularly pricey, Kate’s could fetch a staggering seven-figure sum should the Royal Family ever decide to part with it.

Alexandra Michell, Gemologist at Prestige Pawnbrokers Hatton Garden, previously said: “The piece is hard to value due to the complexity of the make and the large number of diamonds to consider as well as natural pearls which are rare to find in this size and shape.

“However, I would think it could be worth in the region of £2million to £4million.”

Camilla paid a touching tribute to the late Queen with her first tiara outing since becoming Queen Consort, opting for the King George VI Sapphire Tiara.

Part of the King George VI Victorian Suite, the Queen commissioned a sapphire tiara and bracelet to match the necklace and earrings she had been gifted by her father King George VI to mark her wedding in 1947.

The Queen’s tiara and bracelet were made in the 1960s and she often wore them for state events like her 1990 royal tour of Canada.

According to jewellery experts Steven Stone, the sapphire tiara is worth an estimated £5million.

The experts added that the tiara was “refashioned from a 19th Century necklace once owned by Princess Louise of Saxe-Coburg and Gotha (born Princess Louise of Belgium)”, hence why it is often known as the Belgian Sapphire Tiara too.

Sophie, Countess of Wessex is known to be a big fan of aquamarines, and she picked a stunning tiara for the State Banquet on Tuesday.

Sophie opted for the Wessex Aquamarine Necklace Tiara which features a huge central oval stone in between diamond wave motifs.

The tiara is thought to be part of Sophie’s private jewellery collection, and she has also previously worn it in its convertible form as a necklace.

The Wessex Aquamarine Necklace Tiara has previously been valued at around £500,000, and as Sophie’s only daughter, it may one day be worn by Lady Louise Windsor.

Sophie has also previously worn the Anthemion Tiara she was gifted by the Queen for her wedding day and the Five Aquamarine Tiara from the royal collection.