Cafe sparks fury after naming £4 Freshers Week cocktail ‘Get Ya T**s Out’, with women saying it promotes sexual harassment – but owner claims phrase just means ‘let go and have fun’

A café has been accused of encouraging sexual harassment after naming a cocktail ‘Get Your T**’s Out’.

Eleto Chocolate Cafe, in Canterbury, Kent, promoted the £4 drink on social media – describing it as their new ‘house special’ ahead of university freshers’ week.

The post was quickly slammed by a string of disapproving customers, who said the drink’s name promoted sexual harassment.

Despite the wave of complaints, the café has defended the slogan, saying the phrase merely implies ‘letting your hair down’. 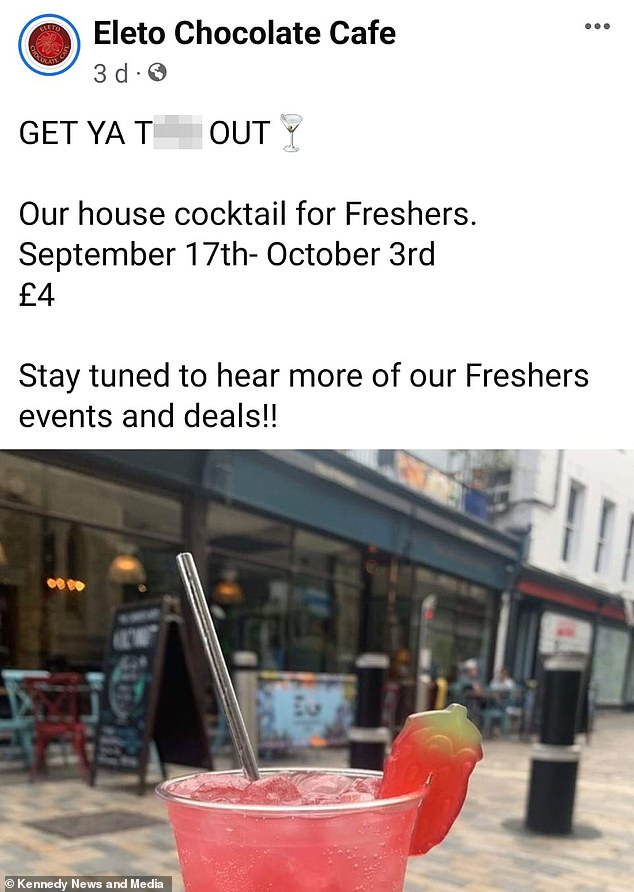 The café posted an advert to highlight its new cocktail, which it controversially called Get Ya T**ts Out 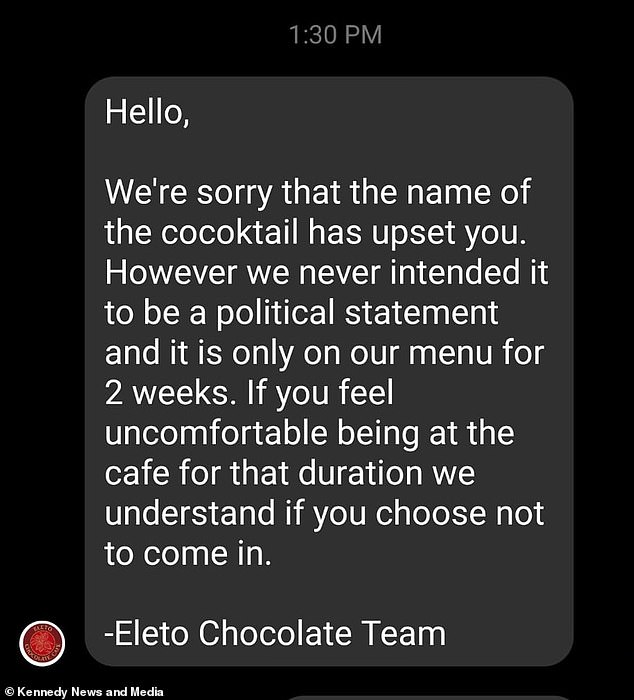 The café apologised that the name of the cocktail upset some customers, but said it was not trying to make a political statement and advised customers to not visit the cafe for the two weeks that it was running if they felt that strongly about it

The saga began on Tuesday, when regular customer Evie Wells, 27, from Canterbury, spotted it, branding it ‘very poor taste’ ahead of Freshers Week.

She said: ‘I saw this first on Facebook. It came up on my feed as I follow them and was a loyal customer for years.

‘I am not a student, however working in a student city I felt disgusted that they would ever think this is okay.

‘This is a phrase specifically aimed at women as sexual harassment.’

After Evie contacted Eleto’s Facebook page, she claims she was told they weren’t trying to make ‘a political statement’ and even suggested she simply not visit until the promotion had ended.

She added: ‘I tried to be calm and give them the chance to rectify.

‘[When I got the response] my first word was wow. I was in shock and really disappointed that they clearly didn’t care at all.’

And she was not the only one horrified. 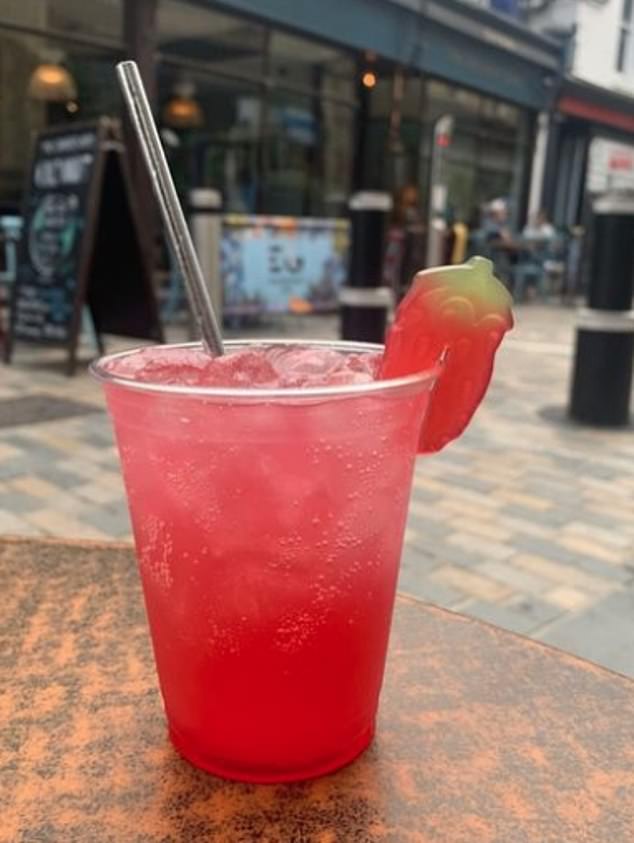 Get Ya T**s Out: The divisively-named cocktail is made up of pink lemonade, Ribena and pink gin, with a strawberry sweet garnish

Another regular customer Naomi Pettman, 28, a marketing student, said she ‘heartbroken’ by the beverage’s name and claims it was an example of ‘what not to do’ from a marketing sense.

Naomi, from Ramsgate, Kent, said: ‘I thought “are you trying to be funny right now” because there is spiking going on around students and young adults.

‘The fact they’re calling it a freshers special and promoting it at Freshers’ [week] when young girls who probably haven’t gone out before in that kind of way could be quite naïve.

‘It was quite heartbreaking. I did message them myself but they didn’t get back to me.’ 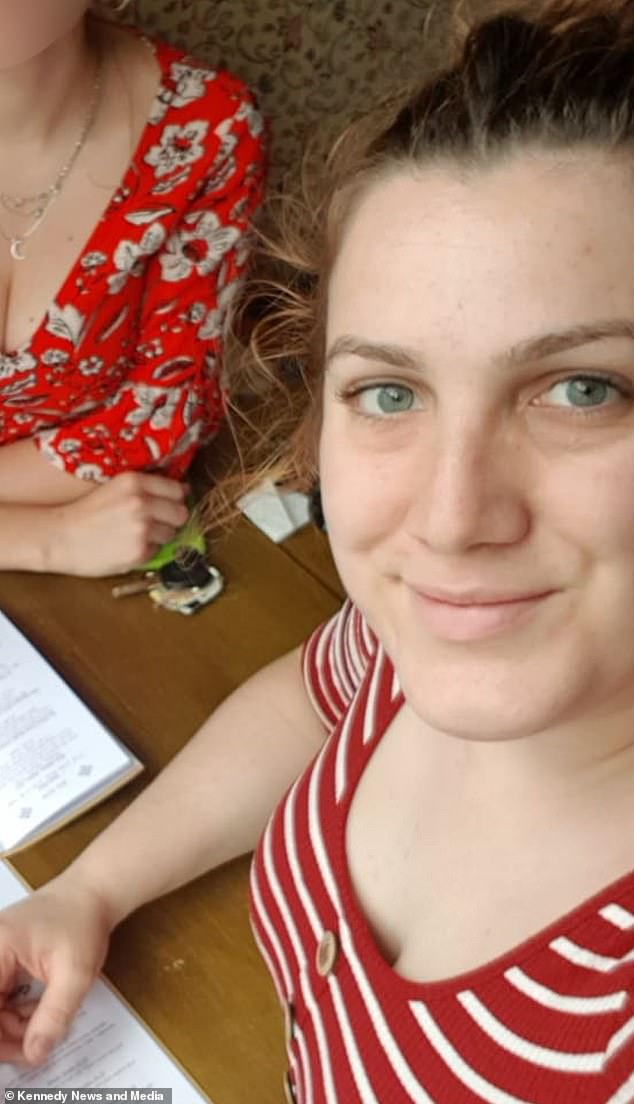 She said the name was definitely encouraging sexual harassment.

She said: ‘Picture this, you’re a young girl who orders it at the table and a group of lads shout “get your t**ts out then”. It’s sexual harassment.

‘Do they not understand? This [suggests] that it’s someone who hasn’t had to deal with sexual harassment.

‘Sex on the Beach is not the same.

‘I’m studying marketing at university. From a marketing point of view this isn’t good marketing, it’s what not to do.’

Her view was backed up by others on social media. 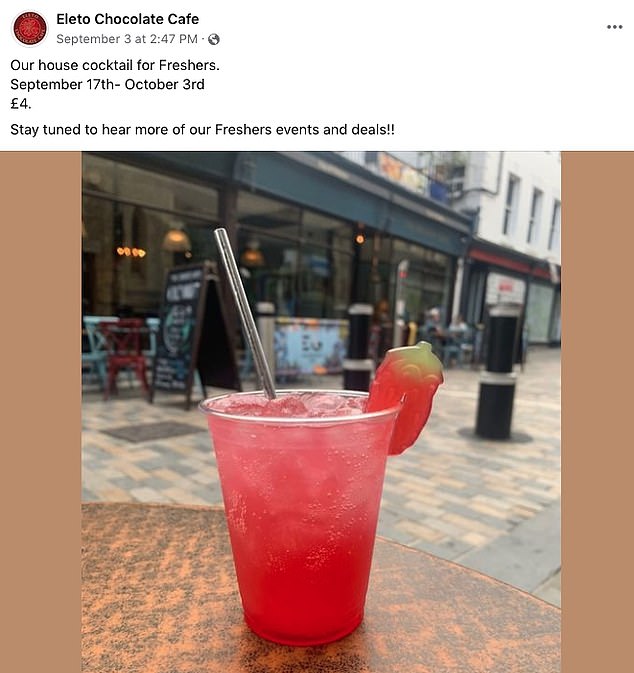 The café did eventually edit their advertising post, removing the name of the cocktail but still promoting it 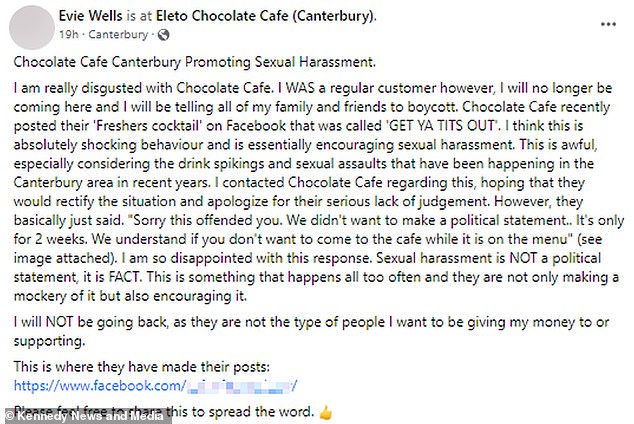 Evie’s post comments on the cocktail created by Eleto Chocolate Cafe, saying how disgusted she was as a regular customer

One wrote: ‘Shocking! I too will take my money somewhere else after reading this!’

Another said: Where’s the ‘Get Your Ba**s Out’ cocktail? Haven’t seen this sort of sexism since the 70s.’

And a third wrote : ‘What! Can’t believe they called it this, well done for standing up for women!’

But, despite the backlash, the café has defended the name, insisting they were trying to ‘take the phrase back’ for women and that others have supported them.

A café spokesman said: ‘To say we were shocked by the backlash created is an understatement, however we’d like to add some context to this situation.

‘The name “Get Ya T*ts out” was created by a female employee of ours. We believe the situation would be entirely different if a male had constructed this cocktail name.

‘We chose this name as an opportunity to challenge the adversity that women face on the daily in an attempt to almost take the phrase back and add a positive spin to it. ‘

They added that the female employee invented the cocktail and chose the name  thinking it would be taken as encouragement to ‘let your hair down’ and ‘just enjoy yourself’.

The spokesman also said many other cocktails had outrageous names.

‘We never intended to cause this much uproar. However, the discussion had to be had and it was a discussion that provided mixed opinions.

‘Our most important point that we want to raise among all of this, is that we’re just a small café, we make food and drinks as well as cocktails in an attempt to put smiles on people’s faces.’

The statement – and the fact the café did eventually delete the cocktail name from their Facebook post – was not enough to placate regular user Naomi however.

She added: ‘I’ve been to this café many times. It’s a really nice café, the staff are lovely.

‘It’s the fact they didn’t even try to rectify it and said it’s “not a political statement”.

‘What do they mean that sexual harassment isn’t a political statement?

‘This was the name of the cocktail, they said it was a freshers’ special.

‘I was 100 percent disappointed to see it. They just need to apologise and change the name.’