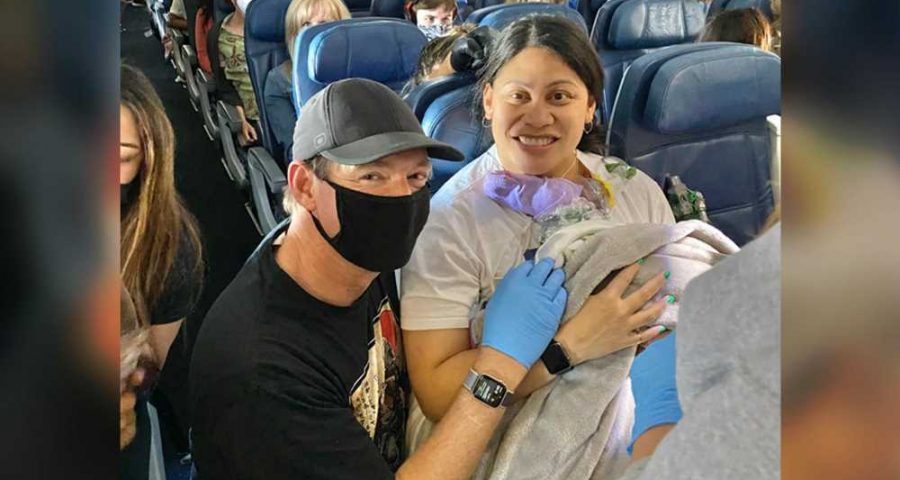 Bum-mer: Bikini-clad tourist claims she was confronted by angry mom on the beach

If a baby is born between Salt Lake City and Honolulu on a Delta Air Lines flight, are they Utahn, Hawaiian or Deltan? It’s up in the air.

That’s exactly the question that Lavina Mounga of Orem, Utah, must answer. The un-expectant mother, who did not know she was pregnant, was surprised to go into labor midflight on April 28, according to multiple reports.

Julia Hansen, 23, captured the whole event on her smartphone and later shared the footage via TikTok, a video watched now more than 13.4 million times.

“It’s the ‘baby being born while we’re above the Pacific Ocean’ for me,” Hansen captioned the post.

“A baby was just born on this plane,” she says to the camera in a low voice. The video then cuts to clapping as a male voice over the intercom suggests a “round of applause for the mother. Congratulations.”

The plane reportedly landed three hours later, pausing the deplaning process to allow EMTs on the plane and assist the woman out.

Hansen and friend Siearra Rowlan, 23, awoke from a nap when a flight attendant pleaded for medical assistance over the intercom and a commotion grew aboard, the Washington Post first reported on Friday, confirming the story with Delta Air Lines.

“The speaker goes on and off like they’re about to announce something but they don’t,” Rowlan said. “Then there’s a little baby crying.

She added, “It was so casual … But one kid was like, ‘This is like from a movie scene!’”

Luckily, three North Kansas City Hospital NICU nurses, as well as Dr. Dale Glenn, a family physician at Honolulu’s Straub Medical Center, just so happened to be on the plane that day and came to the call for help, according to Honolulu’s KHON2.

“I don’t know how a patient gets so lucky as to have three neonatal intensive care nurses on board the same flight when she is in emergency labor, but that was a situation we were in,” Glenn told KHON2, describing how they came to the aid of an apparently premature baby — later confirmed to be just 29 weeks.

“None of the equipment we have was suitable,” said Glenn. “So we made baby warmers out of bottles that were microwaved. We used an Apple Watch to measure the heart rate.”

Glenn warned that unexpected labor is more common than “the public really realizes.”

Local reporters later caught up with the growing family at Kapiolani Medical Center and learned that Mounga had had no idea she was pregnant.

“I just didn’t know I was pregnant. This guy just came out of nowhere.”

“If they weren’t there, I don’t think he would be here, so I’m very blessed,” she said of her in-flight care team.

The airline also noted that they do not have a policy against allowing pregnant people to fly. Per their website: “At Delta, we don’t impose restrictions on flying if you’re pregnant and don’t require a medical certificate for you to travel. If you’re traveling after your eighth month, it’s a good idea to check with your doctor to be sure travel is not restricted.”

As for the new baby’s residence, experts are undecided. The State Department’s Foreign Affairs Manual outlines how national residence is established, noting that only babies born over US airspace would be granted US citizenship. On a state level, some experts, including a spokesman for the Centers for Disease Control and Prevention, have said that families must register their newborn in the state in which they landed with the baby.

Mounga has said that she now considers the health-care workers who helped her through the ordeal her “family,” and might even like to say her baby is Hawaiian.

“Everybody’s so nice, and, you know, the Aloha Spirit is definitely felt here,” she said.