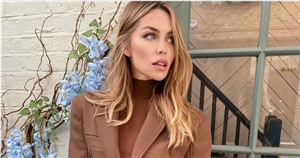 Celebs are getting into the festive spirit earlier than ever this year, with many beginning to share snaps of their lavish Christmas decorations.

Famous faces including Rylan Clark, Georgia Kousoulou, and Gok Wan have all given their homes an early festive makeover, and now model Abbey Clancy has joined in the seasonal fun.

Abbey, 35, took to Instagram to show off her incredible Christmas tree, while it was being installed at her family home.

The model has been married to former footballer Peter Crouch since 2011, and they share Sophia, 10, Liberty,6, Johnny, three, and two year old Jack together.

Abbey and Peter look to be going all out again this Christmas, after transforming their Surrey mansion into a festive wonderland last year.

She took to her Instagram stories this week to document the process of their Christmas tree being built, and there was definitely no expense spared.

The famous couple had hired professional decorators, London Event Florist, to help set up the perfect tree, which is no doubt the first of many extravagant Christmas decorations.

The giant tree stands in the hallway of their family mansion, in front of a grand winding staircase. Featuring hundreds of lights, it had been decorated with a host of traditional red baubles and pinecones.

London Event Florist, owned by Warren Bushaway, helped the model design her stunning tree, and shared a series of videos with the couple.

He wrote: "Gorgeous for gorgeous @abbeyclancy. Enjoy my darling", as a close-up of the decorator's handy work could be seen.

The video showed a full-length shot of the Christmas tree, situated next to a glamorous white marble staircase and a grand piano.

The rare glimpse into Abbey and Peter's family home comes after she recently shared details about their life as a family of five.

She opened up about some of the challenges they face when she made her first ever appearance on Loose Women in September, where she explained how husband Peter sleeps on the floor on a single mattress sometimes.

Admitting their sleeping arrangements were a situation that wouldn't work for "most people," Abbey explained the details to the presenting panel.

“I had two cots in the bedroom for Johnny, [three], and Jack [two]," the celebrity personality said. "Now Jack’s in his own bedroom – Liberty, [six], sleeps in with us and Johnny.

“We’ve had to put a single mattress on the floor next to the bed, so in the middle of the night Pete sleeps on that, but his head and feet are on the floor.

“I kind of like it in a weird way," Abbey laughed, but added that her 10 year old daughter Sophia doesn’t "come in anymore".