Parliament is set to debate the caps imposed on Australians wanting to marry foreigners amid concerns the federal government has set artificial – and potentially illegal – restrictions on the number of overseas grooms and brides allowed into the country.

Labor MP Julian Hill's motion is due to be debated on Monday, with Prime Minister Scott Morrison's record in capping the number of foreigners allowed into the country to marry their Australian fiancees, spouses and de factor partners under the spotlight.

Data shows that under the Coalition, the number of overseas partners allowed into Australia to marry has dropped and flatlined despite section 87 of the Migration Act forbidding any capping of partner and child visas. Partner visas include those who are engaged, married or in a de facto relationship.

The law says if there is a determination of a maximum number of visas that may be granted in a financial year that limit does not prevent the granting of a visa to a person who applied on the grounds that they are a spouse, de facto or dependent child of an Australian citizen or a holder of a permanent visa to live and work in Australia.

Documents obtained under Freedom of Information show a "planning level" imposed by the Department of Home Affairs has led to less than 40,000 foreigners who have proved their relationships with Australians being allowed into the country, down from nearly 50,000 in the four years prior.

"Each year the government announce migration program planning levels as part of the budget," a document prepared by the department's family policy section reads.

"Planning levels are not a 'cap'.

"They are indicative and subject to review throughout the program year to reflect changes in economic conditions and the demand for places."

But while the number of partner visas issued was 39,799 – meeting the desired planning level – the blowout in the backlog of prospective marriage visa applicants has increased to almost 90,000.

Student nurse Jade Stevenson from Melbourne married her husband Tom – a UK citizen living in the UAE – in 2017. The couple has spent $30,000 on visa and agent fees, gathering required documents and travel costs since first lodging their application in May 2018. 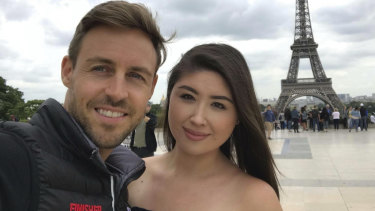 Melbourne student nurse Jade Stevenson and her husband Tom Nuttall reunite in Paris in June, 2018, a year since lodging their partner visa for Tom, a British citizen living in the UAE, to come to Australia.

Their application was sent to Beirut for processing but the department has told her agent and local MP that the events of this year, including the coronavirus pandemic and recent explosion, will further delay her application.

"This is affecting our ability to start a family and begin our lives together in Australia," Ms Stevenson, 32, said.

"Considering the high cost of the application, we would like to see a change in the visa process to include greater transparency and an open communication channel to seek further information on the progression of applications, in order to make it a fairer system for all couples."

The department says it takes between 20 to 24 months to process 90 per cent of partner visas in cases where the couple are married or in a de facto relationship but one half lives overseas.

For couples engaged but not yet married, the department says it takes two-and-a-half-years to process 90 per cent of visa applications which costs a minimum $7715 to lodge.

Mr Hill said the government needed to admit the "illegal partner visa caps" and their growing delays were both "cruel and illegal."

"Nearly 100,000 Australians are suffering, living for years in uncertainty, separated from the person they love in breach of our values and laws," he said.

"Mr Morrison’s failure deserves scrutiny, but all too often these days, his MPs just don’t show up for Parliamentary debates, they hide in their offices hoping problems will go away."

The Prime Minister's Office referred questions to the Minister for Population Alan Tudge on Sunday night.

The Sydney Morning Herald and The Age has previously revealed that the department has cashed in tens of thousands of dollars from hopeful spouses who have been granted visas to enter the country and marry their partners within nine months, only to be blocked by the ban on foreigners entering the country because of coronavirus.

Couples in this situation have until November before their visa expires and the federal government is refusing to refund them their money or extend their visa until their partners are allowed back in the country.

Get our Coronavirus Update newsletter for the day’s crucial developments and the numbers you need to know. Sign up to The Sydney Morning Herald’s newsletter here and The Age’s here.