ALDI shoppers are being put in hour-long online queues to get their hands on Kevin the Carrot toys.

Fans of the character, who first appeared on screens in 2016 as part of Aldi’s Christmas advert, are rushing to purchase the plush toys, decorations and pyjamas, which went on sale this morning. 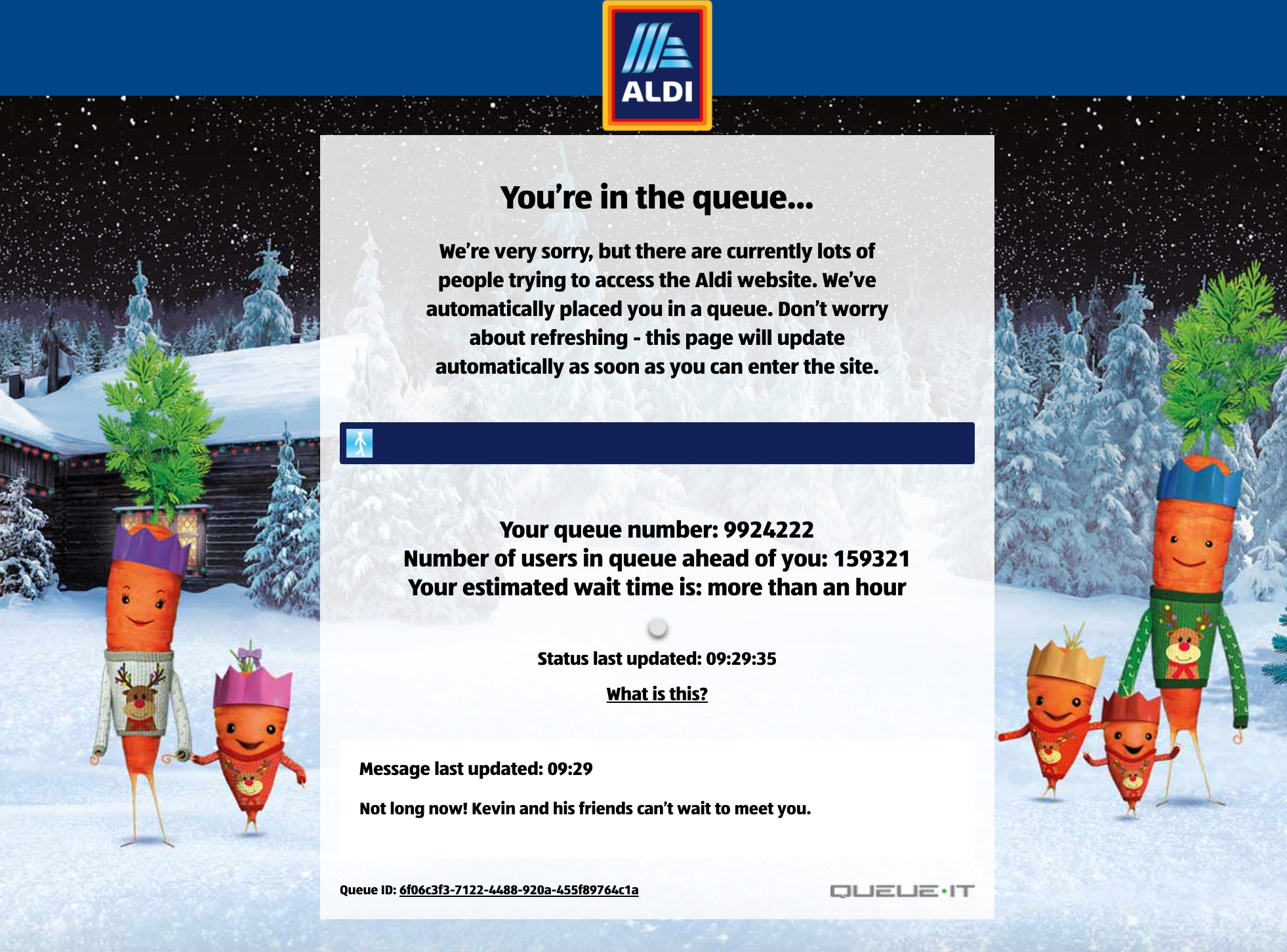 The toys are available to buy online from Aldi's own website and via Deliveroo.

The supermarket revealed on Tuesday it was using the same software as the Glastonbury ticket website to help manage demand after they sold out online in just a few hours last year.

But shoppers said the new system meant they were put in queues for more than an hour to snap up the new range, which went on sale at 8am.

When The Sun tried to log on to Aldi’s website this morning, we were also told that online queues would take more than an hour as 159,000 people were trying to access the supermarket’s website.

Several shoppers said they had also woken up at the crack of dawn to try and purchase the merchandise, which also includes mugs and wrapping paper.

One dad wrote on Twitter: “Parental right of passage…getting up at 6am and online queuing for a Kevin the Carrot toy for Christmas!?”

A shopper added: “Up at 6am sat waiting for a Kevin the carrot only issue is I’m at work at 8am so I’m having to leave it to my mum to get one. Wrote her detailed instructions.”

Another shopper, who said at 10am she had been waiting since 7.30am, said: “Have I really been up on a Sunday since 7:30 to wait in a 33k Aldi queue for Kevin the carrot toys because my mum loves them?” 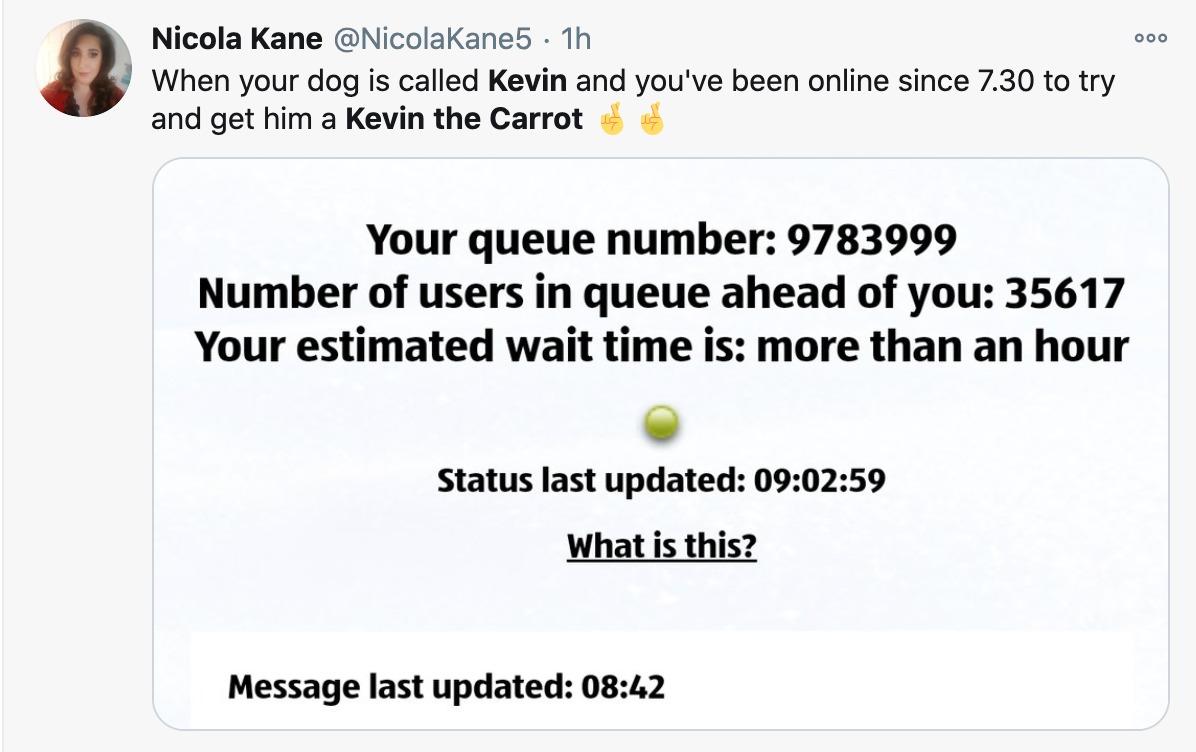 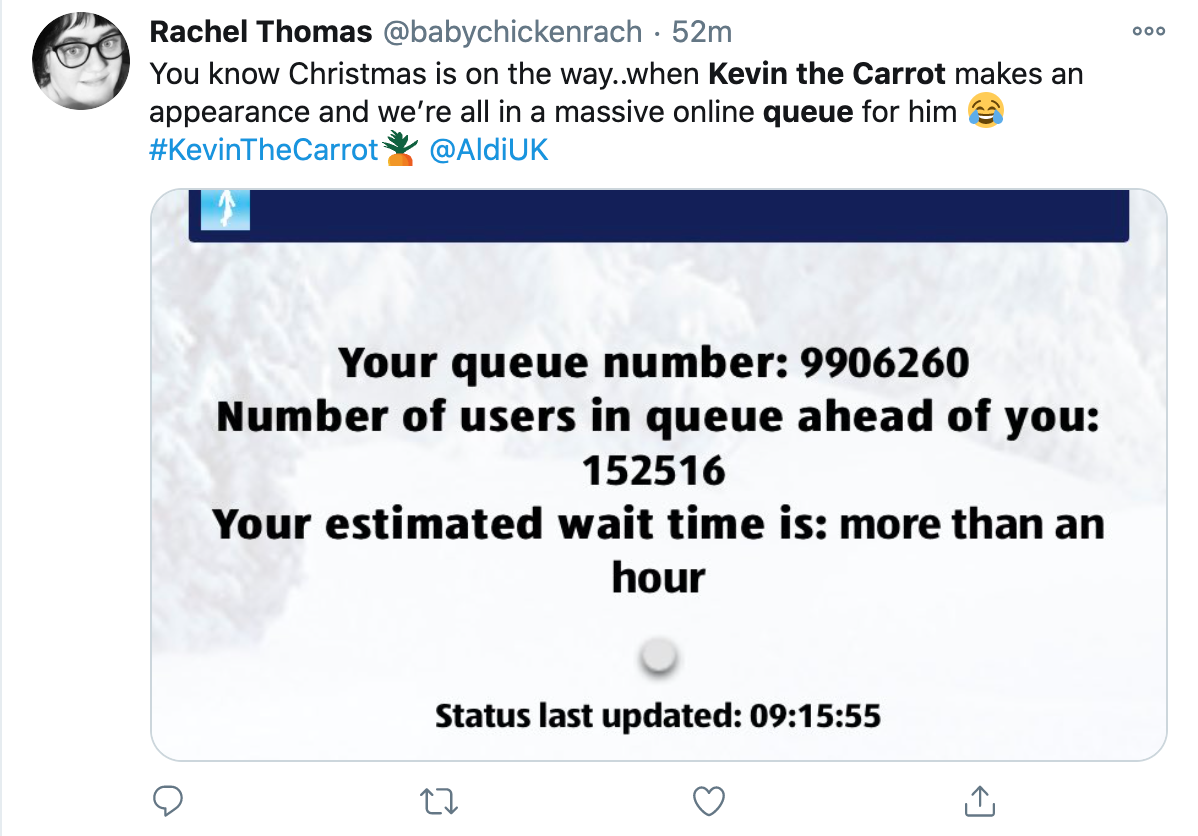 For this year's range, the Kevin toy is dressed as a pilot, like he is in the Christmas advert, and costs £3.99.

There's also toys of the other characters in the ad including Wingman Turkey, Harry the Hedgehog, Grate Grandma and Grate Grandad.

There's also a Kevin and Katie carrot, both wearing Christmas jumpers and party hats, which cost £3.99 each, along with his family, who are named Chantenay, Jasper and Baby, which come as a set of three for £3.99.

And finally there's a giant Kevin costing £19.99, Kevin tree decorations priced at £2.99 each and even Kevin the carrot Christmas pyjamas for kids and adults which range between £4.99 and £9.99.

Shoppers will be limited to buying only two of each of the toys.

Here are all the Kevin the Carott toys you can buy from Aldi this year:

Aldi delivery through Deliveroo costs £4.99 and is only available in certain locations.

The toys are also available in store too but to stop people from rushing to buy them and breaking social distancing during the Covid-19 outbreak, Aldi says they'll be on sale at different times.

Aldi's rival Lidl also took a stab at the supermarket in its Christmas advert this year by digging into a carrot with a fork.

Here are all the Christmas ads so far including John Lewis, McDonald’s and Sainsbury’s.

And meanwhile Aldi has been praised by shoppers for giving staff an amazing 10% Christmas bonus.