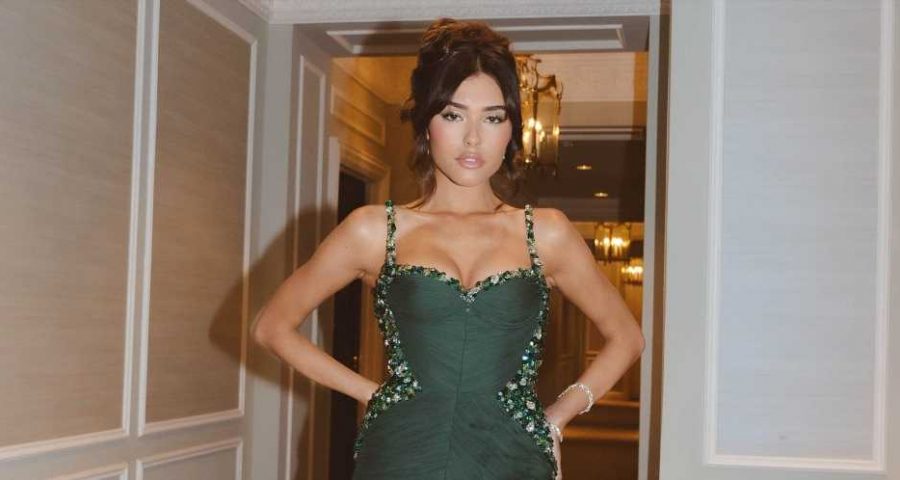 There were a variety of ways a theme like American Independence could have been interpreted for 2021's Met Gala, and while we definitely enjoyed the quirky looks that leaned into the performance aspect of the night, some of our favorites were inspired by Hollywood icons.

Take Madison Beer, for example, who oozed elegance and glamour in a deep green, jeweled creation by Patricia Voto of ONE OF. "My main inspiration for the look was American Old Hollywood glamour — a lot of references to Marilyn Monroe and Jane Fonda, while still wanting to keep things modern," she told InStyle via email, while also sharing some behind-the-scenes photos of her getting-ready process. "I worked with the amazing Patricia Voto to create my absolute dream dress." There's no denying the sparkling design, which also featured an extra-long train, was stunning to look at. However, it's the way the piece came together that makes it even more special.

"All of the materials for Madison's dress were found — not produced for the brand," Voto told us. "We sourced everything locally, and our dress was made in the Garment Center with Mei [Zou, a patternmaker in New York City]. Swarovski graciously provided us with the crystals. We have a rich mixture of color and type. We created a very organic pattern throughout, which we hoped would glisten down the carpet." And glisten it did — although, it definitely seems like it was a true effort to make that happen.

"I keep telling our patternmaker a dress of this detail is being executed in record time. There were five of us sewing crystals on at one point," said Voto. "Madison had a very clear direction from the outset — Old Hollywood. It felt right for the theme. We looked at images of Marylin Monroe, Veronica Lake, amongst others. We wanted to make something that would highlight her figure. The ruching was carefully placed for her proportions and hand-tacked throughout, and the crystals that frame the neckline and waist were meant to define her even further." Beer, however, didn't seem worried about Voto's ability to work her magic. When explaining why the designer was the perfect person to partner with for this major fashion event — and her first-ever Met Gala — the singer simply cited Voto's impressive résumé.

"She's worked with so many of your favorite designers, from Brock Collection to Altuzarra, and sources incredible archival fabric for each look she works on. Her designs are so iconic and timeless, and I'm so glad we were able to collaborate!" After such a busy fashion-focused week, jumping from NYFW to the VMAs and to the Met Gala, we wouldn't blame either Beer or Voto if they were feeling tad exhausted. But both women tell InStyle they're more than ready to get back into the swing of things after a long year-and-a-half.

"It feels so nice to be able to safely come together again," said Beer. "Between the Met and the VMAs, it's been a crazy week for sure, but it feels good to get back to some level of normalcy." Voto agrees and views all the runways and red carpets as a revival of sorts.

"I think it's a wonderful moment for the industry. We took our pause, re-evaluated and now we're all back in it. I loved seeing what all of the brands have presented and the buzzing energy around the city."