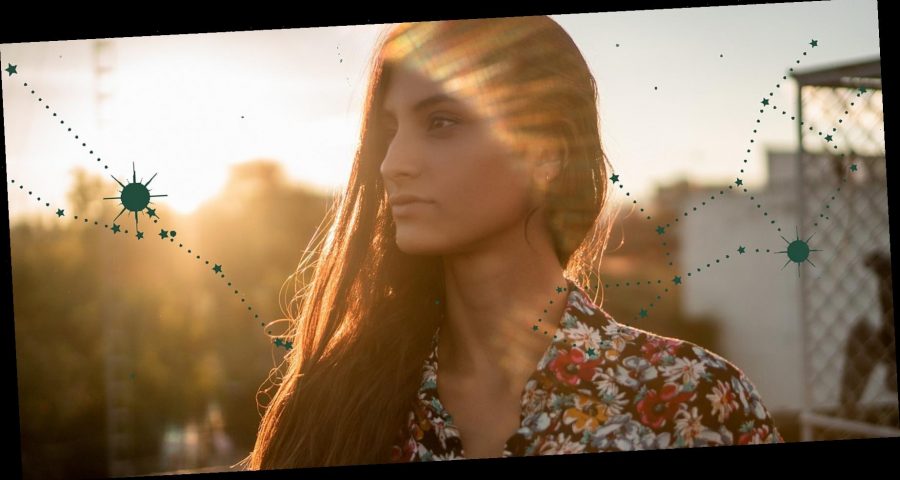 March's Pisces new moon found us in a dreamy state, more interested in the abstract and what could be rather than what was happening right here on Earth. This month's new moon, which will arrive on Sunday, April 11, still calls for lofty goals, but its surrounding energy will be wholly different from last month — more fiery, passionate, and, be warned, much more reckless.

This is all thanks to the fact that the new moon will occur in the hard-headed sign of Aries. Quick to act and sometimes even quicker to anger, the sign of the Ram isn't exactly a natural fit for this pensive lunar phase. If last month saw you with your head in the clouds, this new moon will fill your head with steam. Beware of frustrations and push-pull conflicts, but you should also look forward to a renewed understanding of exactly what you're capable of.

A boost of Aries energy is just what we need right now.

At the risk of stating the blatantly obvious, it's been hard to feel excited about much right now.

So many of us had to put our plans for 2020 on ice that it may seem foolish to even think about reheating them now, let alone trying to come up with new ones. But, if there's one Zodiac sign that beckons expansion and forward motion, regardless of the odds, it's Aries. This Martian fire sign is represented by the Ram for a reason. Where others might move to the back or sit on the fence, Aries people happily charge ahead. They are tenacious, bold, and confident — and who would say no to a little more confidence at this very moment?

Whatever sign hosts the moon has its energy amplified, imbuing everyone with its strengths and weaknesses. Even the meekest among us will feel newly interested in making positive changes to their lives, to solving the problems that slow their progress and dull their momentum. That's the upside of Aries energy: No mountain is so tall that you won't try to climb it — and you'll likely surprise yourself by just how far you can get. This is also the rare point at which the new moon and Aries intersect. On the night of the 11th, they will work in tandem to help you see just how much you're capable of, when you put aside perceived roadblocks, defeatist points of view, or a simple lack of motivation.

But that energy will be tested.

With this new moon comes one very big, very glaring catch. Despite all this fuel in your tank, you shouldn't step on the gas quite yet. That is never the point of a new moon. This lunar phase demands stillness, which you may have to sit on your hands in order to achieve this month. It will undoubtedly be frustrating to be so aware of your potential for growth, only to simultaneously feel a pull toward repose. If you feel like you're going in opposite directions — and, as a result, staying in one place — you're not alone.

Through that frustration, however, you may learn something vital about what you're truly yearning for. Our impulses can be powerful signals toward deeper, older desires. If you were to allow your knee-jerk needs to arise and rest upon the surface of your mind, rather than dictate your very next move, what else may come up?

Between the weekend's heightened Aries energy, the ongoing invigoration that comes with springtime, and the simple fact that many of us have felt stuck at a standstill for the last 12 months, it could feel downright impossible to ignore your instincts to move, no matter the direction, no matter the end goal. But hitting pause for just a little bit longer will not only give you a better idea of where to go but how to get exactly what you want. For all Aries energy has to offer in terms of sheer horsepower, it lacks a steering wheel. That sort of control only comes with time and reflection — and that's what we have the new moon for.