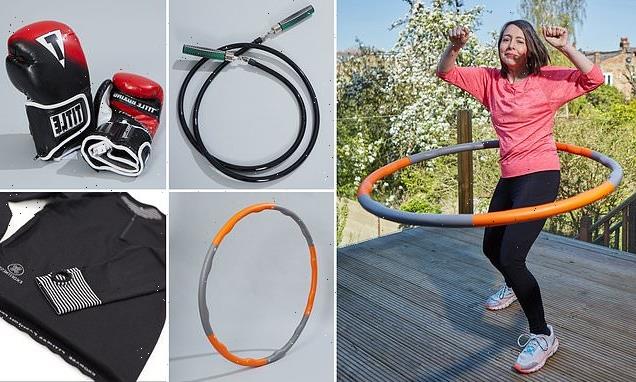 Why it’s time you put some weight ON… your fitness equipment, that is. ANNA MAXTED tries the new trend for hiding weights in running tops, skipping ropes and even hula hoops

This year has been short on joy — and has added wobble to waistlines. While we’re keen to get fitter, we’d prefer effective but fun, endorphin-boosting exercise that’s distracting enough not to feel like punishment; or, failing that, is mercifully brief.

We want to build strength but we’re not all fans of the weights room. Happily, the fitness industry has taken hitherto charming activities such as skipping, walking and hula hooping and added weight to them.

‘With weight training, you can stand there with weights on your shoulders and do nothing, and your body’s physiology begins to change to deal with that extra load,’ she explains. 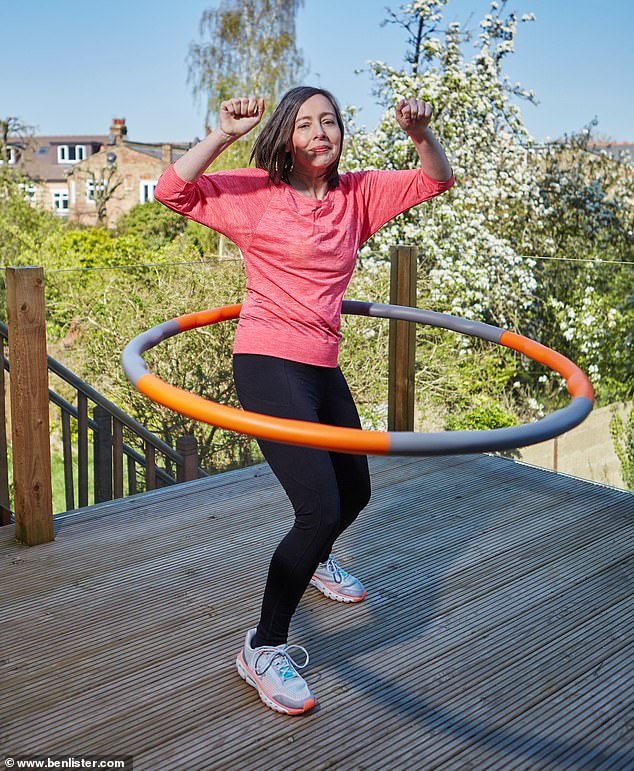 Anna Maxted has trialed five of the best activities which can help you to build strength with added weight, for example skipping and hula hooping (pictured)

‘Our body has to work to keep us upright. So the minute you put weight on it, every muscle has more work to do. Which means adding weight helps any workout, even if you’re standing still. How effective it is will depend on how much weight you add.’

Whether you want to push yourself or go easy, there’s a weighted exercise to suit. Here, we trial five of the best. 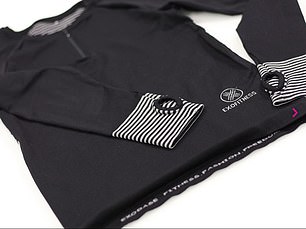 Shelley Sinclair, 57, was tired of carrying hand-held weights on her daily power walks, so she created a top with zipped pockets in which you can place small, flexible weights so they become an integral part of the garment. The top, neatly fitted and stretchy, comes with four 100g weights, which you can distribute on various muscle groups. There’s room for eight: three on each arm (two close to your wrist, and one on your upper arm), and two for the abs.

I put on the top, added extra weights (£30 for four), flung on a jacket and went for a walk with a friend. The weights lie quite flat on your body, and I didn’t feel self-consciously bulky. At first, I was aware of the extra weight, but I soon forgot about it. After an hour, I returned home and realised that my arms were gently fatigued. It’s not hardcore, but it’s not meant to be. Ingenious.

Zana Morris says: ‘Every little helps. It’s like carrying around a tiny bit of shopping. This would be terrific for people recovering from illness, or older people who haven’t done much exercise and would like to start gently. It’s a great way to make walking that bit more intense’. 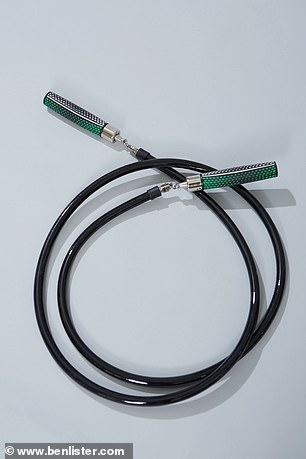 How can skipping ropes — or jump ropes as we must now call them — cost this much? The answer is that they’ve been rebranded as grown-up quality training products.

Crossrope has an impressive range of durable plastic ropes, weighing from 3 oz to 5 lb. The Get Strong set includes two — a mighty 2 lb rope and a 1 lb one for high intensity strength workouts.

The Get Lean set includes a 4 oz rope, great for endurance, and an 8 oz rope, good for cardio. The handles are clip-on with precision steel bearings, so your rope swings smoothly and you can switch ropes easily during workouts. The free Crossrope App features workouts, challenges, tutorials and activity tracking.

Pah! I know how to skip. Turns out it’s an art: arm symmetry, relaxing shoulders and rotating with your wrists are important.

I soon feel it in my upper arms with the 1 lb rope, and a twinge in my elbow tells me my technique needs work. (I adjust my arm position and it goes.) The 2 lb rope is exhausting but a buzz.

Zana says: ‘You’ll be working your arms, shoulders, chest and back with the swing, not to mention the calves, thighs and glutes with each jump.

Skipping is a great, high intensity training exercise anyway. The lighter rope will get your circulation going, before you do a more intense HIIT session. If you’re doing it properly, it will be a great abdominal work- out, too. 5/5 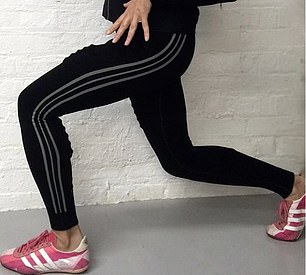 These comfortable, clingy leggings from Exofitness have four integrated pockets to hold flexible weights and add some resistance to your run. (Hey, I already have resistance to my run!) The weights are positioned at the front of your quads and at the back of your calves. They’re not uncomfortable, but I am aware of them.

As I push forward, I feel the tiniest bit of extra resistance against my quads. It’s not dramatic but I can see that the effect would be cumulative — though you’d have to run further and more frequently than I do.

Zana says: ‘If you’re running, there’s already a bit of impact on the body. So there needs to be a common sense approach to how much weight you’d add to that. This concept is great though because it’s gentle.’ 4/5 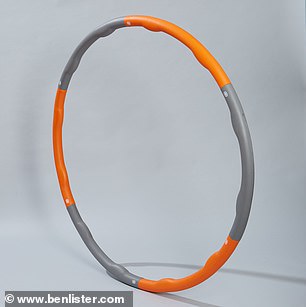 The hoop consists of six plastic sections that slot together. You can hula as is, or you can insert three of the six 150g iron fillings that come with it to bring the weight to 4 lb.

If you’re hulaing at half-measures, distribute the weights evenly so the hoop remains balanced. If you want to go full hula, add all six to get it to 5 lb.

A question: What monster took the gentle art of hulaing and created this Frankenstein of hoops? I’m not even hooping at the heaviest option and am out of puff after one minute. It’s intense. My hips have never gyrated with such fervour. I have to wildly exaggerate the motion just to keep the hoop in the air.

The hoop is covered with rubber foam to soften the impact as it collides with your middle but, at first, I do feel rather roughed up. Not wishing to be beaten — in every sense — by a hoop, I persevere. I need to go faster to make it work. Easy to master and perversely enjoyable. If I did this daily, even for just five minutes, my fitness would definitely soar.

Zana says: ‘It’s always useful if an exercise is fun. And if it’s harder to keep in the air than a normal hula hoop because that extra weight is pulling it down, then you’ll need to engage your abs and obliques (sides) more, and your hips and glutes will be working harder and faster.’ 4/5 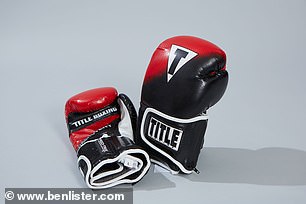 These handsome gloves each come with six Twix-sized 8 oz weight bars zipped into little neatly sewn slots within the wrap-around wrist strap ‘to help increase speed, strength, stamina, power and aerobic capacity’. If you’re a lightweight like me (generally, I mean, not in the boxing sense), it’s probably wise to remove all but one weight and gradually progress.

I didn’t. Consequently, after a brief bout of gently bopping the punchbag in our makeshift home gym, I felt like jelly.

The extra weights are positioned on your forearms, so they especially ache after my short, inglorious round, but I can also feel the burn in my triceps and biceps, and there’s a pleasing heaviness in the muscles between my shoulder blades.

No wonder. Each glove, with all six weights, is about 3.25 lbs. An added-value efficient strength workout. This is what I call boxing clever.

Zana says: ‘When I trained in tai chi, my teacher half killed me by making me hold my arms out straight for more than a minute. So punching, arms outstretched, with additional weight, will make it a lot more intense on both the deltoids (shoulder muscles) and the triceps.

If you’re doing it properly, you’ll be forced to drive more from the abdominals.’ 5/5