The violent hate crimes against Asian Americans you heard about since last spring haven’t stopped. In fact, they may be worse than ever.

Since the beginning of the coronavirus pandemic in March 2020, Asian Americans have reported being targeted in nearly 4,000 hate incidents nationwide, with many crimes occurring in the Bay Area and New York City.

Tuesday’s Atlanta area massage spa shooting deaths of eight people, including six who appeared to be of Asian descent, refocused the spotlight on anti-Asian violence.

According to NYPD data, hate crimes motivated by anti-Asian sentiment jumped by 1,900% in the last year. In the year prior to Feb. 28, a staggering 3,795 racist incidents against Asian Americans and Pacific Islanders were reported to the the advocacy group Stop AAPI Hate. Because these numbers are self-reported and some victims may not speak English, community advocates say there are likely far more cases that haven’t been recorded.

In spite of President Joe Biden’s condemnation of anti-Asian racism, the attacks, especially those targeting Asian senior citizens, have continued with alarming regularity.

On Jan. 28, Vicha Ratanapakdee, an 84-year-old man from Thailand, was taking his morning walk around his San Francisco neighborhood when a 19-year-old was filmed rushing at him and violently shoving him to the ground. He died two days later as a result of the injuries from that fall.

Meanwhile, a 28-year-old stands accused of pushing a 91-year-old Asian man to the ground in Chinatown in nearby Oakland two days later. And in Manhattan on Feb. 3, a 61-year-old Filipino man needed almost 100 stitches on his face after another passenger slashed him on the New York City subway. He told the New York Daily News that he thought he was going to die from blood loss and that no one on the train came to help him.

This isn’t just an American problem. In the U.K., reports of hate incidents against South and East Asian communities increased 21% during the pandemic in May alone. (Because COVID-19 first came to light in Wuhan, China, and because of the racist belief that Asians are a monolith, Asian people have been widely scapegoated regardless of origin.)

“We are in a moment of reckoning,” activist Amanda Nguyen told MSNBC recently as she called on people to denounce anti-Asian hate crimes. “Silence erases our humanity. Yet it roars through the head of every Asian American as they step out the door and are afraid … How many more people need to be killed?”

What can you do to help? First, recognize that the Asian American community is under attack, then take action. Below, activists and advocates share eight things you can do to help the community as an ally.

Since these racially motivated attacks began, many Asian American Pacific Islander (AAPI) advocates have decried the lack of media coverage and the seeming indifference of many Americans to these attacks.

Now that you’re aware of what’s going on, share what you know with friends and family on social media. Speak out and stand in solidarity with the Asian community.

“People are hurting and want to feel like their voices are being heard,” said Zeena Koda, the co-founder of Asian American Collective. “Use the power of the internet to bring awareness to our larger community and educate each other.”

Not sure what to say? That’s OK. Pass the mic by retweeting and sharing the words and work of Asian American activists who are speaking out and trying to disseminate information about how to help. For instance, the post below from @dearasianyouth. (And while you’re at it, follow more Asian voices on Instagram and Twitter to diversify your feeds.)

Since the beginning of the pandemic, the Stop AAPI Hate Reporting Center ― a coalition of nonprofits, organizers and educators ― has been instrumental in keeping track of attacks, both nationally and locally.

If you’ve witnessed or experienced microaggressions, harassment, bullying, hate speech or any other type of violence, report it to the group. The more information they have, the better equipped the center will be to respond and prevent further incidents from occurring in local communities.

Bring up anti-Asian harassment without being anti-Black.

Yes, some of the suspects in these attacks have also been people of color, but activists urge people to not reframe what’s going on as a Black versus Asian issue.

In this critical moment, we should be promoting understanding and solidarity ― not division and blame, said Rachel Chau, an activist and the creator of the Instagram account @angryasianfeminist.

“There’s a lot of tension between the two communities because the model minority myth pits us against one another, but it’s important to not place blame on any community for the ideologies of white supremacy,” she said. “We need to keep the solidarity and remind ourselves of the vast Afro-Asian history we have with solidarity during the civil rights movement.”

Stephanie Hu, who runs the account @dearasianyouth, said she’s disheartened (but not entirely surprised) to see some of the anti-Black remarks in the comment sections of her posts about recent hate crimes. (Indeed, many young Asian Americans have been reckoning with anti-Blackness in their families since the protests of George Floyd’s murder last spring.)

“This is not an ‘opportunity’ for the Asian community or anyone else to attack or stereotype the Black community ― it is a time for both groups to condemn hatred and come together in keeping our elders safe,” she said. 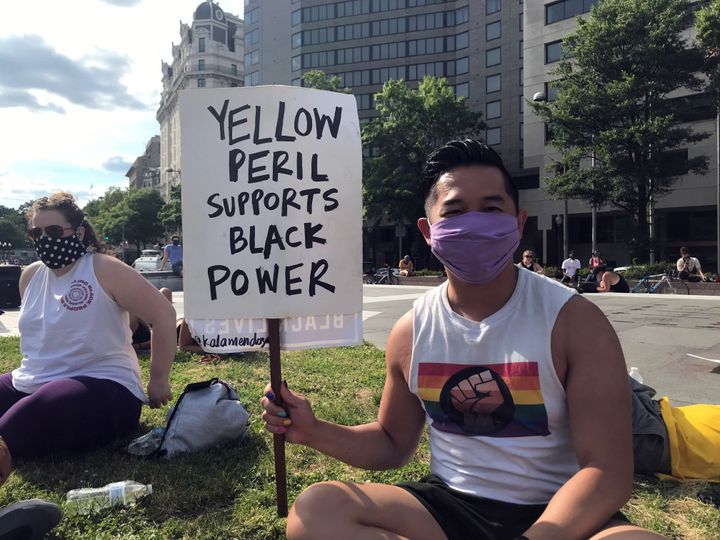 Donate funds to community organizations that are helping out.

Plenty of local nonprofits have risen to the occasion and are trying to address the needs of affected communities and seniors. For instance, Oakland Chinatown Coalition has partnered with other local community organizations to facilitate outreach, organize community strolling to escort elders around the neighborhood, host vigils, and most importantly, work on investing in long-term, community-centered solutions.

These groups depend on donations, though. If you’re not sure where to donate, this GoFundMe will split funds equally between eight Bay Area organizations and six similar groups in LA and New York. It will be up until Saturday, Feb. 13. 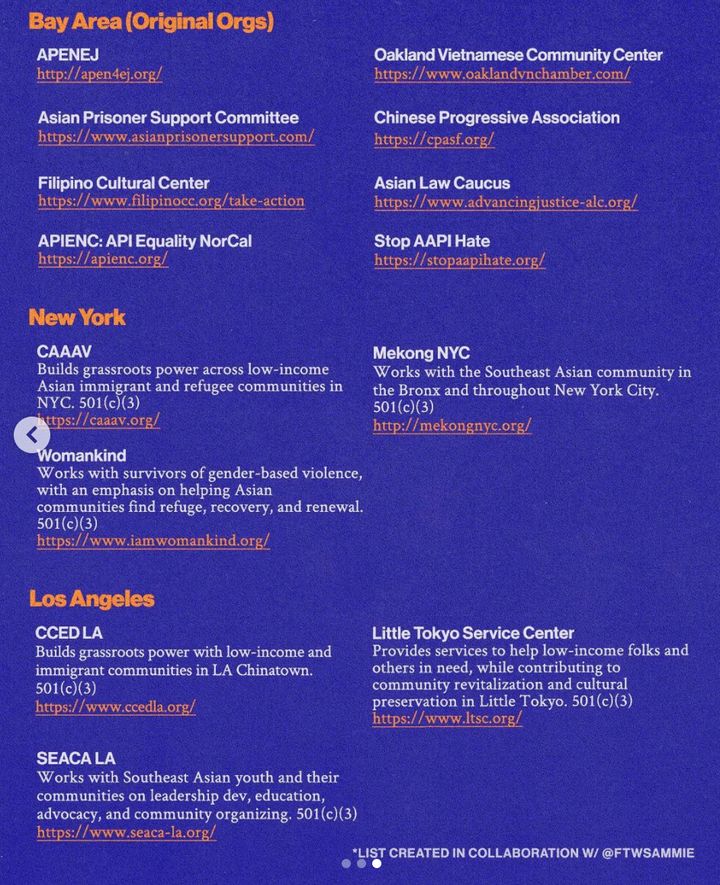 Some shop owners in metropolitan Chinatowns fear that senior customers are staying away due to concerns over COVID-19 and possibly being attacked. Kenneth Lam, a shop owner who was recently robbed, told NBC News that older residents have said “they’re actually afraid to come out, to walk their own streets.”

To make up for that lost business, consider patronizing your local Chinatown. (Where else are you going to get the best dumplings in town?)

Around Lunar New Year, activists in Oakland encouraged folks to wear yellow, or to wear Black-Asian unity T-shirts to show that Black and Asian communities and neighbors are stronger together.

“Our community members wore shirts like this in the weeks after the George Floyd murder to express solidarity against police violence and in support of BLM,” said Ener Chiu, who works at East Bay Asian Local Development Corporation, a group that works to build healthy, vibrant and safe neighborhoods with and for diverse populations.

“We recognize that when Black folks have worked to make America more inclusive, it has invariably benefited Asian Americans as well,” he said. “The shirts became a symbol of not scapegoating another community.” 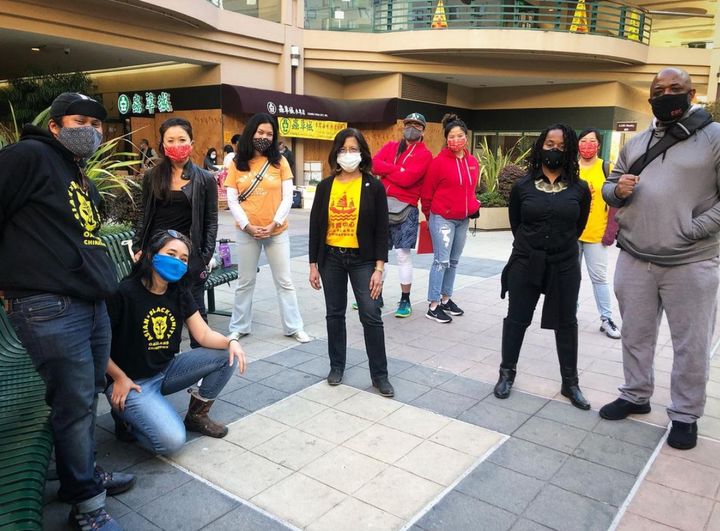 Don’t fall into the trap of believing that all Asian Americans are successful and therefore can’t be victims of racism.

As sociologist Nancy Wang Yuen pointed out on Twitter recently, there’s a “false belief that if members of a group earns a level of economic status, then racism must not exist. Asian Americans have the biggest economic disparity of any racial group, and the bamboo ceiling is very real.”

Asian invisibility and violence against Asians is nothing new. (See the murder of Vincent Chin and the Chinese massacre of 1871, for starters.)

The violence we see today is part of a historic pattern of xenophobia, white supremacy, racism and ageism in the United States, said Connie Wun, the co-founder and executive director of AAPI Women Lead.

“There are racist tropes, which characterize our communities as rich in resources, when many of us are living in poverty, especially our elders living in our ethnic enclaves including Chinatown,” she said. “This uptick is a part of the invisibilization and neglect of the racialized experiences that have long impacted Asian communities. When our stories are rendered invisible, our most vulnerable become even more vulnerable.”

Speak up against injustice and harassment when you see it.

Earlier on in the pandemic, a viral video showed people on a train in the U.K. defending an Asian woman who was being racially harassed for wearing a mask to protect herself as a cancer survivor.

“If she wants to wear the mask, then she can wear the mask, it doesn’t bother nobody else,” a bystander said before calmly objecting to the harasser’s use of racial slurs.

It was a great reminder that there are safe and simple ways you can intervene in hate incidents. With the rise of online videos that have captured harassment and intimidation, some have even decided to sign up for active bystander training with groups like Defend Yourself. The group was created to empower people — especially women and LGBTQ+ people — to stand up against harassment and assault in public places.

Check in to see how your Asian friends are doing.

As Therese Mascardo, a psychologist who works in the Asian American community, told HuffPost in April when these attacks first began, allyship can also mean just checking in on your Asian American friend to see how they’re doing given the circumstances.

“Don’t be afraid to be direct. You can say something like: ‘With all the racism against Asians lately, I was wondering if anyone has treated you differently?’ Just listen and support them,” she said. “And please, don’t minimize their experience.”

This article, originally published Feb. 19, was updated March 17 with new reports of incidents against Asian American and Pacific Islanders and with the Atlanta area massage spa killings.