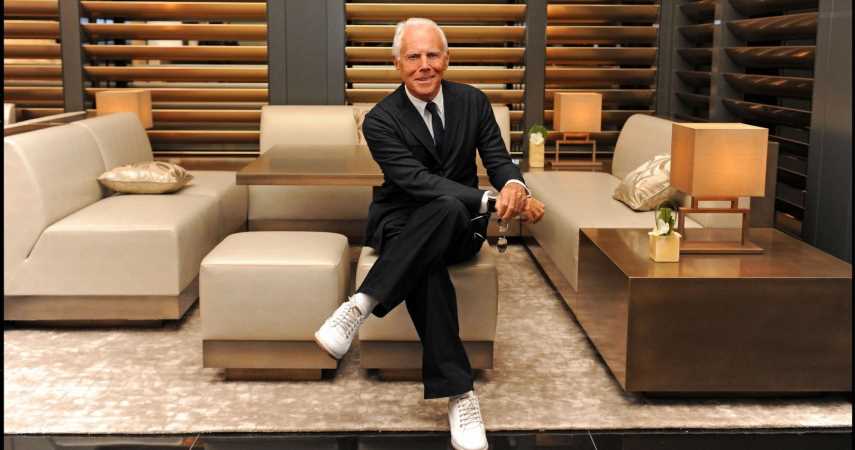 Almost every Hollywood celebrity has endorsed the Giorgio Armani brand, whether willingly or in a movie. Born in Italy, Giorgio Armani, who is the owner and fashion designer of the brand after his own name, first established his billion-dollar fashion empire in the mid-1970s after working for another Italian stylist, Nino Cerruti.

After finding inspiration from Cerruti and other fashion houses, Armani’s passion for fashion soon put him in high demand and by 1975, he owned his own label in Milan which tailored men’s and women’s ready-to-wear clothing pieces. It wasn’t until the 1980s that he penetrated the US market with new lines such as Giorgio Armani Underwear and Swimwear, Armani Jeans, and a list of fragrances with L’Oréal. As his fame spread, a few of the A-list celebrities he has designed for include Cate Blanchett, Julia Roberts, the Queen B Beyoncé, and Lady Gaga among plenty of other famous names and television shows and movies. Here are a few of the ways Giorgio Armani spends his $9.6 billion-dollar fortune.

It’s no mystery that Giorgio Armani is one of the richest fashion designers the world has ever seen. His ever-increasing net worth places him at the top of the hierarchy when compared to other fashion moguls, including Rihanna’s billion-dollar Fenty fashion and beauty house enterprise. However, great business minds think alike, and Armani made the wise decision to let his money work for him by establishing Armani Hotels and Resorts in 2005 which has luxury hotels operating in the billionaire capital of the world, Dubai, as well as in Milan, Italy.

According to Lexington Downtown Hotel, the Armani Hotel Dubai is located inside Burj Khalifa, the tallest building in the world, and occupies floors 38 and 39. A single suite with a balcony in the Armani Ambassador Hotel is priced at $1,406 per night while the Armani Dubai Suite is priced at $3,811. His second hotel, Armani Hotel Milano, opened its doors in 2011 and has hosted celebrities such as the Hollywood actress Jessica Alba and Peter Sarsgaard.

There are many celebrity restaurants that have become extremely popular simply because of their name being attached to them, such as the international Nobu restaurants part-owned by Robert De Niro. However, he isn’t the only ultra-rich personality with restaurants all around the globe. Beginning in 1998, Armani launched his food and beverage debut in Paris with the first Armani Restaurant. Since then, he has opened over 20 restaurants in locations spanning from New York, Florida, and the United Kingdom to Egypt, Jamaica, Milan, and Dubai. The cuisine is of an international appeal and blends Mediterranean and intercontinental flavors and has been rated 4.5 out of 5 on platforms such as Tripadvisor.

Armani has proven through his many business endeavors that an eye for detail and a natural talent for design can be applied to almost any other field. As if having his men’s suits sported by some of Hollywood’s brightest stars, he transferred his talent to interior design and formed Armani/Casa in 2004. While his name may not appear on the list of the top 10 most famous interior designers, Armani’s interior design service provides design concepts for projects ranging from apartments, villas, and residential complexes to decking out the inside of yachts and planes!

Most famous fashion designers have an amazing car collection, sometimes worth hundreds of millions. And why not when they have the money to buy it? For example, the fashion icon Ralph Lauren owns a collection of both classic and modern exotic sportscars worth well into the multi-millions. But Giorgio Armani is different as he would rather create a business opportunity with a car company than merely stack cars in his garages, such as his business venture in 2016 with Bugatti making leather goods and refined clothing. Little is known about the cars he actually owns, but sources state that he does own a Mercedes Benz CLK.

Many of the world’s billionaires maintain such a net worth due to their extensive portfolio in real estate. From Ellen DeGeneres and Patrick Dempsey to Brad Pitt and Angelina Jolie – celebrities are known to put their money into ever-increasing assets like land and property. But Armani takes the cake with his real estate listing. A few of his homes include his Saint Moritz, Switzerland mansion; a spacious Manhattan penthouse he purchased for $17.5 million; a 15,000 square-foot, 26-room villa in Milan, Italy as stated by the New York Times, and a Caribbean cliffside villa located in Galley Bay Heights along the west coast of Antigua which he visits periodically throughout the year. Life definitely is a breeze for the fashion design mogul.