Namila Benson discusses her upbringing, career and the men who have influenced her. 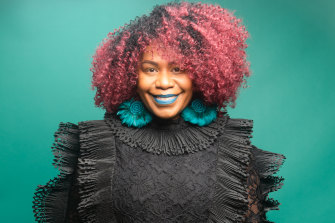 Namila Benson on her grandfather: “This little machine, he made me realise, was a gateway to connect with people.”

My maternal grandpa, Tamti Amos, died in the mid-’80s, but I think of him often. He was the impetus for me getting into radio, because when we went to visit him in Rabaul, in Papua New Guinea, Grandpa would be sat on his woven mat in the village, listening to Radio Australia and the BBC on a transistor radio.

He spoke beautiful English for a Melanesian man, and schooled me on the importance of radio as a connection with the world. This little machine, he made me realise, was a gateway to connect with people.

My dad, Warium, was a radio broadcaster for the PNG National Broadcasting Corporation. He met my mum, Dora, a nurse, through family and village connections. Dad came to Melbourne to train with the ABC. Once he set up the ABC’s Pacific services, my parents migrated to Melbourne in 1973, when Mum was pregnant with me.

Mum is a Tolai woman from a matrilineal society. Wealth and identity are passed down through
the female bloodline. As the eldest daughter, Mum had a lot of responsibility in her community.

Dad did a lot of the parenting, as Mum often spent time back in PNG. He was very domesticated and was an amazing cook. He was big on Reader’s Digest, so we always had books. He was strict and carried a lot of ways of the homeland, but was a good dad. He was also a black man trying to navigate a white corporate world, which was huge.

Dad took me to work with him. I got to see him as an executive producer and journalist who broadcast internationally. Because of him, I’m at home in a studio.

My parents separated when I was 12, as Dad had met someone else. That was hard. Even to this day I struggle to bring it up with him and how it impacted my two siblings and me.

My teenage celebrity crush was Prince. I was like, “Who is this simmering, sensual man who does funk like no other? Who is this godlike creature?” I was obsessed.

I knew I didn’t want a career in health or science journalism like Dad. Because my parents had a great music collection, I wanted to do something connected to music. I approached community radio station 3CR and started answering phones, and soon filled a shift for a presenter. Of course, I was terrible, but I loved doing it and the experience sealed radio for me.

I met my partner, Nick Harrison, in 2010, at a conference I was moderating. At that time, I was a broadcaster at Radio Australia and a presenter on Art Nation. Nick approached me with a segment idea. He was a field recordist and we are both audio nerds, and so we started hanging out.

I fell pregnant with our son, Solomon, the following year. The next year we had our second son, Manu. It all happened very quickly but I was like, “This is my dude.” Nick shows immense kindness and support in supreme ways. He is unafraid to let me shine. Any time I do anything – like writing actor Uncle Jack Charles’s memoir – homeboy shouts it from the mountains. Mentally, emotionally, domestically, he takes over so I can be free to do what I need. That’s a love language in itself.

We are not married, much to the horror of my Islander family, but having babies lets me off the hook. Not to disrespect anyone who goes down the marriage path, but the passing of a woman as property from her father to the husband … I feel weird about that.

One of the neighbour’s kids said to my eldest, “You are not your father’s child because your parents aren’t married.” It was an interesting conversation. I told my son, “Your papa is your papa and we don’t need to be married.”

Art Works screens Wednesdays at 8.30pm on ABC iView and ABC TV Plus.

This article appears in Sunday Life magazine within the Sun-Herald and the Sunday Age on sale October 17. To read more from Sunday Life, visit The Sydney Morning Herald and The Age.

The Booklist is a weekly newsletter for book lovers from books editor Jason Steger. Get it delivered every Friday.