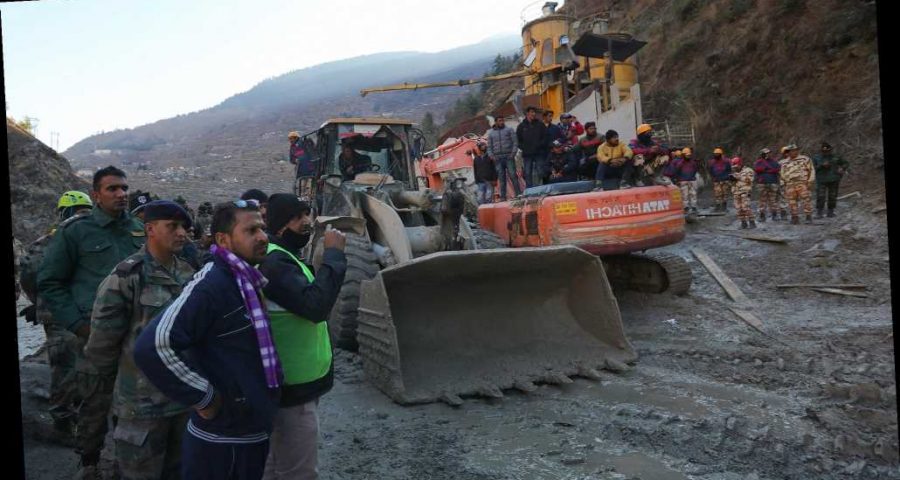 At least 26 people were killed and more than 150 remain missing after a chunk of Himalayan glacier broke off in India and sent water and debris flooding the area, according to multiple reports.

Search teams of more than 2,000 people have been searching along the banks of the Alakananda and Dhauliganga rivers in the state of Uttarakhand following the incident on Sunday, the Associated Press reported.

Most of those reported missing were working on two different projects — the small Rishiganga hydroelectric project, which was destroyed, and a bigger one being built by a state firm further down the Dhauliganga river, which was damaged, according to Reuters.

"Our brave-hearts worked throughout the night and have reached the mouth of tunnel…rescue operations are ongoing in full swing & we are hoping to save more lives," Uttarakhand state chief minister Trivendra Singh Rawat wrote on Twitter Sunday night. "Unfortunately, rescue teams have also recovered 11 dead bodies so far. Our thoughts and prayers are with everyone."

The AP reported that rescuers were trying on Monday to reach 37 power plant workers trapped in a tunnel following the disaster.

Twelve workers from the plant were rescued on Sunday from a separate, smaller tunnel, and those still stuck have been out of contact since the flood. Officials told the AP they were using heavy machinery to clear a tunnel 1.5 miles long in order to reach them.

Rakesh Bhatt was the first worker from the rescued group to be saved, and told the AP it was "a great relief."

"We thought it might be rain and that the water will recede. But when we saw mud and debris enter with great speed, we realized something big had happened," he said. "We waited for almost six hours – praying to God and joking with each other to keep our spirits high."

Rawat wrote on Twitter that rescue and relief operations were "in full swing," and urged people not to "use this natural disaster as a reason to build anti-development narrative."

According to Reuters, the two projects greatly affected by the flood are "part of the many the government has been building deep in the mountains of the Uttarakhand state as part of a development push."

Anjal Prakash, research director and adjunct professor at the Indian School of Business who has contributed to U.N.-sponsored research on global warming, told the AP that the fallen glacier appears to have been caused by global warming, though no data for the exact cause is available yet.

NBC News reported that more than a third of the ice in the Himalayas and the Hindu Kush mountain range is expected to melt by 2100, according to a 2019 reported by the International Centre for Integrated Mountain Development.