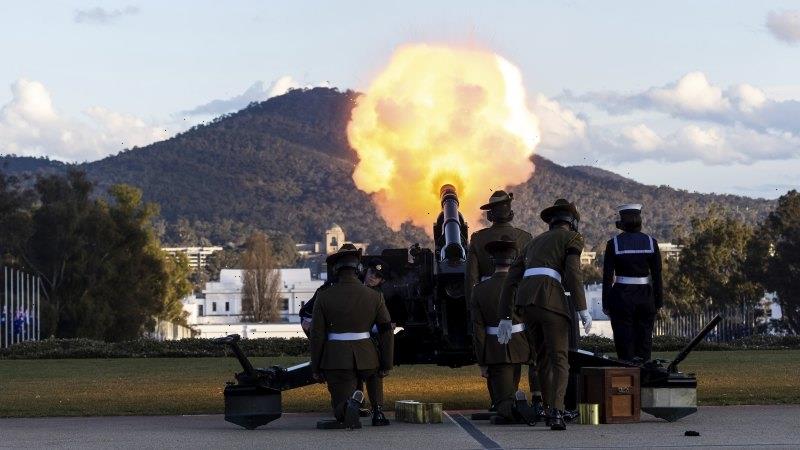 Australia will hold a national day of mourning to mark the death of Queen Elizabeth as part of a 14-day observance that will see parliament suspended and ministers called to a special meeting on Sunday to proclaim King Charles the new sovereign.

Prime Minister Anthony Albanese will assemble the full ministry to recommend that Governor-General David Hurley issue a formal proclamation at Parliament House at noon on Sunday in a public event to mark the transition to the new monarch. 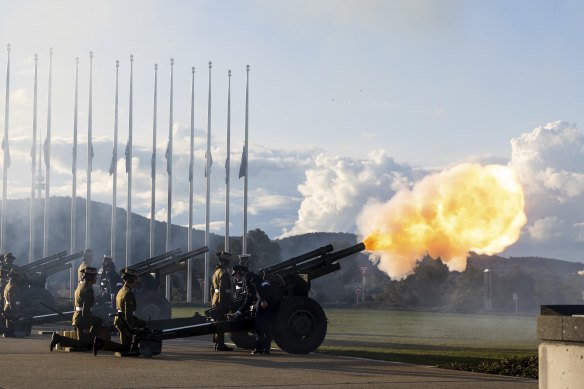 A gun salute on the forecourt of Parliament House fired one round every 10 seconds for each of the 96 years of the Queen’s life.Credit:Alex Ellinghausen

With leaders from across public life praising the Queen for her 70 years of service, a gun salute on the forecourt of Parliament House fired one round every 10 seconds for each of the 96 years of her life.

Hurley, who was informed of the Queen’s death at 2.08 am AEST on Friday, said her example was as relevant today as when she took the throne in 1952.

“That example of selfless service, devotion to duty and compassion for others is both an enduring legacy and a gift to us all,” he said in an address to the nation on Friday night.

A national memorial service will bring political, legal, military and community leaders together in Canberra to mark the Queen’s passing at the end of the observance but there is no decision yet on whether the day of mourning will be a public holiday.

Albanese praised the Queen for the way she engaged with people ranging from everyday citizens to global leaders, noting she had ruled during the governments of 16 Australian prime ministers.

“It’s been a remarkable life of service and duty, love for her family, love for her country, and a love indeed for Australia that she expressed on many occasions during her visits that of course began way back in 1954,” he said.

Opposition Leader Peter Dutton said the Queen had ruled with an empathetic heart and wisdom gained from almost a century of life and experience.

“The last page has been inked on an exceptional reign,” he said. “Her Majesty was gentle, kind, and much-loved.”

King Charles is expected to deliver a speech to parliament in Westminster on Monday after the proclamation and his formal accession. The date of the coronation will be set at a later time by Buckingham Palace.

Only later in the week, however, will the governor-general and the prime minister fly to London with their partners for the funeral. Once in London, Albanese is expected to have a brief audience with the King.

“She was an exemplar of public leadership, married for a lifetime to political restraint, remaining always, the constitutional monarch,” Keating said. 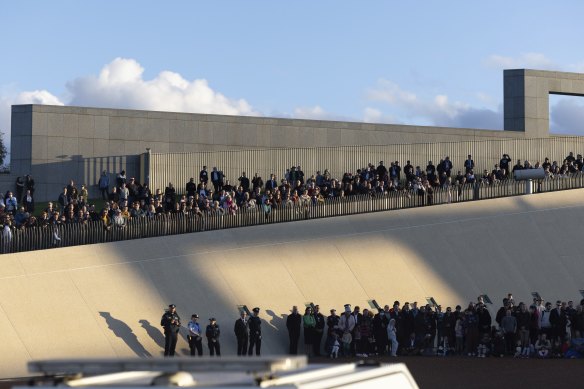 Greens NSW senator Mehreen Faruqi said she could not mourn “the leader of a racist empire built on stolen lives” and Greens leader Adam Bandt said Australia needed to become a republic, but leaders from other parties chose to leave the debate over constitutional reform for another day.

Albanese has put a priority on constitutional change to deliver an Indigenous Voice to parliament and there is no timetable for a referendum on a republic.

Parliament had been due to return on Monday for four days, followed by a five-week break. There was no proposal from the government on Friday to make up the lost time in the weeks ahead.

The suspension delays the government’s plan to introduce a bill to set up a federal independent commission against corruption, so the proposal could now go to an inquiry and give crossbench MPs time to test whether the proposal meets their objectives in cracking down on wrongdoing.

The Queen’s death is not expected to delay the plan for parliament to return on October 25, the day of the federal budget.

Unions and business groups declined to comment on whether the national day of mourning should be a public holiday and there was no suggestion from the government on Friday that this would occur.