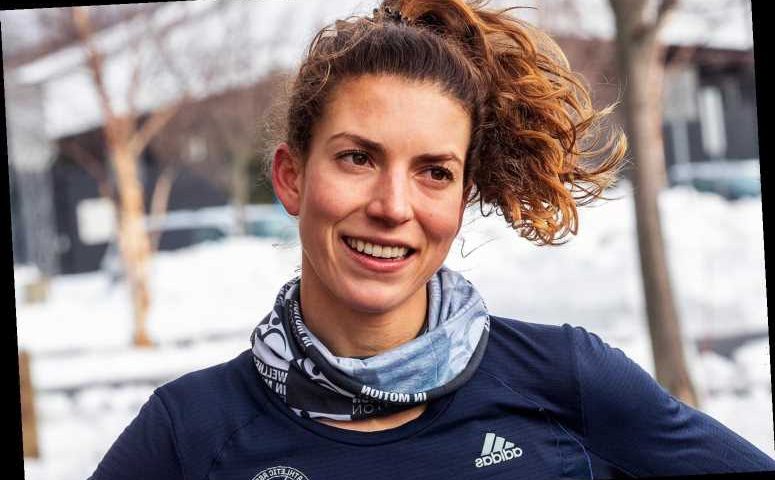 Dana Giordano was only 14 when she was diagnosed with ovarian cancer and underwent surgery to remove a 5½-pound tumor from her body.

Now at 27, the professional runner has her eyes set on the Tokyo Olympics.

Giordano opened up about past health struggles during an appearance on PEOPLE (the TV Show!), sharing that the surgery scar she once thought was a "sign of weakness" is now the "most powerful thing."

"It was definitely something in the beginning where I … thought it was a sign of weakness. You know, like this is something that everyone can see," she explained. "And now, I realize the most powerful thing is just to walk around in a bathing suit or track uniform like it's not even there. I think that is very empowering to me."

Looking back, Giordano said she was "always a super active kid growing up," but her athletic plans were put on hold after doctors found a malignant tumor the size and weight of a "standard cantaloupe." RELATED: 17-Year-Old Ovarian Cancer Survivor on the Symptom She Ignored: 'I Want to Make People Aware'

"The next day, after I got the scans and found out what it was, I went straight into surgery," Giordano recalled. "I have about a 12-inch scar from above my belly button and all the way down, vertical across my stomach. It was a long recovery process."

Giordano barely got to play on her high school freshman's soccer team as a result, prompting her to join track and discover a passion for running.

"That was kind of my first time that I found my place," she said. "And it was one of those things where my coach definitely saw it before I did."

From there, her love for the sport only grew. Even when doctors found another tumor on her other ovary the following year and she had to undergo another surgery, she was focused on track.

"They found another cyst in my other ovary about four weeks before the race, and I was completely devastated because that's all that I wanted to do," she remembered. "The same doctor and the same hospital performed the surgery and it was a much smaller procedure — very small scale." Catch People (the TV Show!) Monday through Friday. Check your local listings for exact times or stream the show every day at 7 p.m. ET/ 4 p.m. PT at People.com and PeopleTV.com.

Giordano ran for Dartmouth College and worked for Reebok before becoming a full-time runner.

Last year, she bested some of her personal records and qualified for the 2021 Olympic Trials.

"It was one of those things I couldn't stop thinking about," she said. "It was in the back of my mind and I was like, 'Well, why not me?' "

"Sometimes, I do have those images of what it would be like to walk around with the American flag around yourself, doing that big victory lap. And I try not to get too ahead of myself there because it would be such a dream come true."