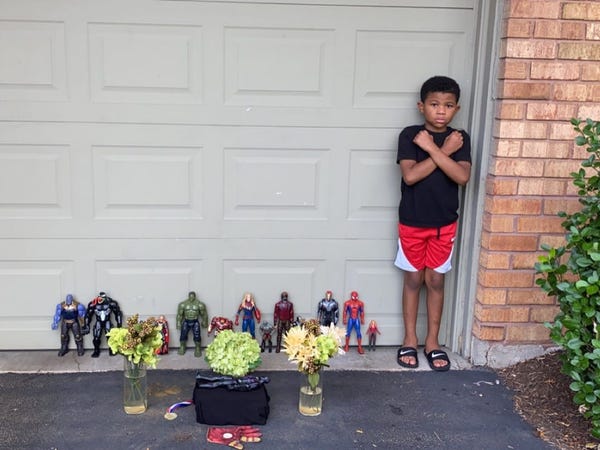 Actor Chadwick Boseman, known for his role as the "Black Panther" superhero King T'Challa, died of colon cancer on Friday. Fans and colleagues were shocked by the news, as Boseman had never spoken publicly about his illness.

Children who idolized the "Black Panther" hero mourned his loss by holding memorials with their Marvel action figures.

King Westbrook shared a photo on Twitter of his 7-year-old son, Kian, paying tribute to his hero. The image, which garnered more than 600,000 likes on Twitter, shows Kian's Black Panther toy on a box surrounded by flowers and other Avengers action figures. Kian holds a "Wakanda Forever" pose.

"Kian wanted to thank everyone from the bottom of his heart for all the loving and kind words given to him for this post," Westbrook tweeted. "When he found out about Chadwicks passing, he was heartbroken. But he knows death is a part for being human, and wanted to cope with losing his hero this way."

Rudy Pervis also posted a photo of her 7-year-old son, Max, in a Wakanda salute while holding his Black Panther action figure.

We gave Max the sad news about Black Panther dying and going to heaven… surprisingly taken the news a lot easier than expected. I think it might be me that needs a little time to process it. 😢😢 #wakandaforever #blackpanther #chadwickboseman

"We gave Max the sad news about Black Panther dying and going to heaven… surprisingly taken the news a lot easier than expected," Pervis wrote. "I think it might be me that needs a little time to process it."