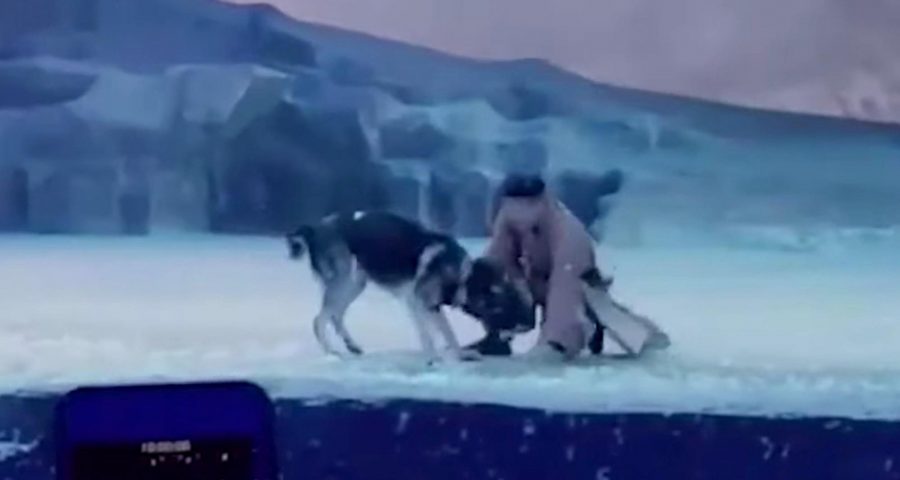 Campers attacked by bear while sleeping in south Alaska

They’re being accused of throwing their actors to the wolves.

Viewers are raising safety concerns over a Chinese play, in which real-life wolves were seen chasing performers through the middle of a crowded theater in Xi’an. A clip of the Colosseum-esque exhibition currently boasts 433 million views on the Chinese media platform Weibo.

In the shocking footage of the show — titled “Tuoling Legend,” or “The Legend of Camel Bell” — wolves can be seen pursuing performers across the stage sans any leashes or safety harnesses.

At one point, the apex predators leave the stage and chase the actors through the packed aisles while audiences record the shocking scene. The toothy thespians even act out fight scenes with a wolf pretend-mauling one of the performers as they flail about on the ground.

The controversial scene was part of a visual history of the Silk Road — an ancient trade route — in which the wolves were meant to symbolize the dangers China’s ancient camel warriors would face while traversing Central Asia, CNN reported.

Online viewers were flabbergasted over the hyper-realistic stunt, which they thought literally threw the actors — and the audience — to the wolves.

“I would lose my mind if just sitting there,” one aghast gawker commented on Weibo, while another wondered, “What if something unexpected happens?”

However, Huaxia Cultural Tourism, the company behind the show, insisted that the “wolves are safe and won’t hurt people.

“The wolves have been domesticated for three to four generations,” a representative said in a statement. “They are legally raised and trained by professional trainers with certifications since 2018 and no accident happened in the past three years.”

In order to further ensure the safety of the audience, the company put up protective nets between the stage and seats, according to CNN. Meanwhile, the actors reportedly donned safety gear so they wouldn’t get injured while play-fighting with their canine co-stars, the representative added.

This isn’t the first time a Chinese production has employed the services of these four-legged performers. Jean-Jacques Annaud’s 2015 Chinese ecological epic “Wolf Totem” made headlines over its use of wolves that were raised from pups and trained to perform a variety of complex stunts on-screen.