“I know my parents are with me. My mom’s name was Ranae Stause and my dad’s name was Jeff Stause. This dance is for them.”

Chrishell Stause paid tribute to her late parents with a moving performance on “Dancing with the Stars.”

During Monday night’s episode, the “Selling Sunset” star dedicated her contemporary routine to her late mom and dad, who both passed away following battles with lung cancer. Stause, 39, and her partner Gleb Savchenko performed the emotional dance number to “Stars” by Grace Potter & The Nocturnals. 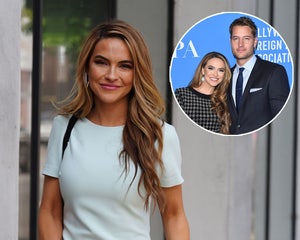 The former soap star opened up about her touching tribute before her performance.

“It’s such a beautiful song. I’m so emotionally connected to it. It’s one of the songs that I listened to on repeat when I was dealing with the loss of my parents. The idea of creating something in their honor is really… ,” she said tearfully.

“They were really loving people. Some of my best memories are with my mom dancing with her in the living room,” Stause continued. “It makes me a little sad because I would’ve loved to teach her a little cha-cha or something. She would’ve loved it.”

“Nobody would be more excited about me being here than doing this show than her. Right before I dance, I really feel her call me, encourage me,” she added. “That has been the most special thing that I will take away from this show. I know my parents are with me. My mom’s name was Ranae Stause and my dad’s name was Jeff Stause. This dance is for them.”

Following her performance, Stause earned her highest score of the season, receiving a 24 out of 30, with judges Carrie Ann Inaba, Derek Hough and Bruno Tonioli all giving her an 8.

“You poured your heart and soul into your dancing,” Inaba said to Stause. “I felt it. I think we all did.

The elimination was ultimately in Tonioli’s hands after Hough voted to save Weir and Inaba cast her vote for Davis. Tonioli chose to save Weir and Stewart, sending Davis and Murgatroyd home.

Monday’s action-packed hour also featured the return of Hough to the “DWTS” stage. The professional dancer and his girlfriend Haley Erbert performed a sexy, paso doble set to “Ucccen” by Taabi Brothers.

Watch their performance, below!

“Dancing with the Stars” airs Mondays at 8 p.m. ET on ABC.

Got a story or a tip for us? Email TooFab editors at [email protected].