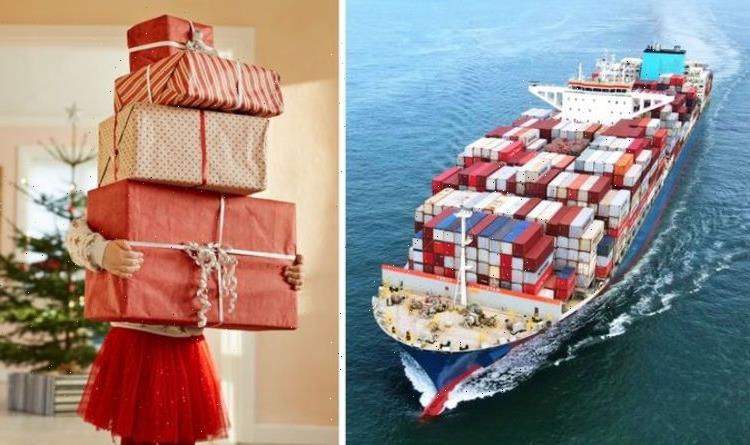 Product shortages have made headlines in recent weeks and months, with both Brexit and the pandemic to blame for disrupted goods and missing deliveries. Due to driver and staff shortages within the food, hospitality, and logistics industries, Britons have noticed shortages of various items nationwide, including water bottles, sweets, crisps, beer, and more.

Now, even more products may be at risk of not arriving retailers’ and supermarkets’ shelves on time, if at all.

This is because China has been forced to close the world’s third-largest port following a Covid outbreak.

A terminal at Ningbo-Zhoushan port in China, which handled cargo equivalent to almost 29 million containers in 2020, has closed.

The closure comes at the busiest time of the year, as companies prepare to stock up for Christmas.

Retailers are already struggling with product shortages, and now they must also try to avoid a Christmas crisis.

Charlotte Cook, Head of Trade at research firm VesselsValue warned there is “potential” for the situation to affect end-of-year deliveries.

She said: “Congestion in Chinese ports is likely to remain for a while with strict lockdowns being enforced, meaning there’s the potential for this to impact Christmas deliveries if we don’t see a significant improvement soon.

“Just as everyone thought container rates couldn’t climb anymore, it’s now looking likely that congestion at key ports could continue to push up rates even further.”

DON’T MISS:
Public perception of Kate and Pippa ‘some distance from reality
Why you SHOULDN’T buy a house right now – Experts react to price index
Property warning: Housing stock shrinks by 40% since January

Prices paid for containers have soared to record highs in recent months as global trade networks have been damaged by disruptions at ports and borders since the beginning of the pandemic.

According to data from VesselsValue, there are 352 large container ships currently in the sea at anchor, waiting to get into ports around the world.

Nick Glynne, Chief Executive of online retailer Buy It Direct, warned the closure of the Ningbo-Zhoushan port will only add to the long list of issues British companies are currently dealing with.

He said: “This is not a good sign for a happy Christmas or even a Black Friday.”

British retailers have struggled to keep on top of stock over the past year due to lorry and staff shortages.

Many workers have either contracted Covid or been pinged by the Track and Trace app, meaning that they have had to self-isolate for 10 days.

As for lorry drivers, many of them working in the UK were EU citizens who have now returned to their native countries.

Industry leaders have said that companies are doing their best to rectify the problem, with some businesses offering sign-on bonuses worth £1,000 or more to drivers.

Andrew Opie, a director at the British Retail Consortium (BRC) was positive there won’t be any disruption issues come Christmas.

He said: “Christmas is hugely important to retailers and customers alike, and businesses are already making preparations.

“While we do not anticipate problems, retailers will be taking all necessary measures to mitigate possible disruption.”

There are also fears that the upcoming August bank holiday will be impacted by product shortages.

Experts within the food and drinks industry have warned of a “beer drought” due to staff at GXO Logistics Drinks going on strike.

The company supplies the UK’s hospitality industry with 40 percent of its beer, according to trade union Unite.

Last month, Joe Clarke, Unite’s national officer for the drinks industry, said: “A beer drought could result if our members vote for industrial action because they make 40 percent of the beer deliveries in the country.

“This disruption would be on top of the ‘pingdemic’ that is already hitting the sector.”

This week, Mr Clarke confirmed that the strike will go ahead, adding: “Now industrial action looms for late August, we call, once again, for the company to engage in meaningful negotiations regarding a decent pay increase for our members.”

A GXO spokesperson commented on the industrial action, saying: “We favour dialogue in all our negotiations. Discussions are ongoing in order to reach agreement, in particular for the hospitality sector that is only now emerging from the impact of the Covid-19 lockdown.”