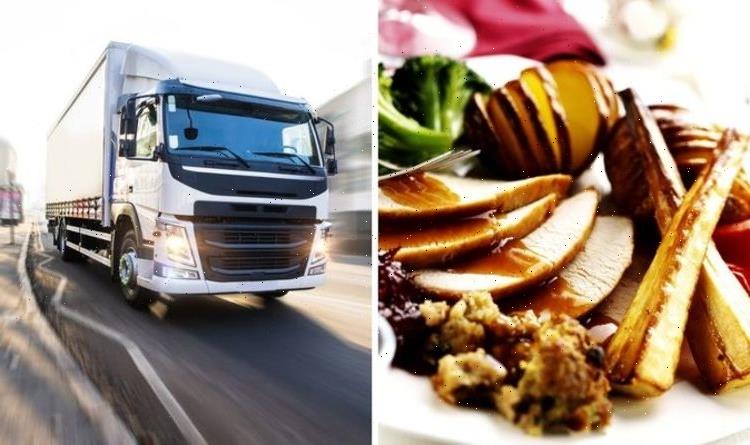 BBC viewers hit out at coverage about ‘Christmas shortages’

Let’s face it, Christmas is all about sitting down with your loved ones and enjoying an extravagant, hearty meal. Last year’s festivities were blown to pieces by the UK Government’s restrictions, which forbade more than two households from spending the day together. It’s likely Christmas will be relatively normal this year, but our dinner plates could look a little different. The lorry driver shortage has continued and sadly this may mean retailers will need to start rationing. Express.co.uk reveals the two food items supermarkets could put limits on.

Christmas wouldn’t be complete without the food we know and love, which is why supermarkets are rumoured to be rationing food in order to save Christmas this year.

Don’t panic, though! Christmas staples such as turkeys and sprouts are being prioritised to make sure we all have access to them in the days leading up to the big day.

The products you may find it tricky to get your hands on are regular items rather than festive items if the lorry driver shortage hits food deliveries too.

Right now, we are 100,000 truckers short of what we normally need to keep Christmas deliveries up and running.

The lorry driver shortage has caused a stoppage of shipping containers at Felixstowe in Suffolk – England’s largest port.

A source told The Sun: “Retailers will be prioritising the essential Christmas gifts.

“If there was a big squeeze of drivers and stores couldn’t get all the things they needed they will be rationing lines.”

The two food items supermarkets could put limits on

We don’t know exactly which foods could be rationed, but the industry source has suggested Christmas foods will not be the problem.

Instead, things like pasta and bottled water could be cut down in numbers.

They said: “Rather than seeing 15 types of pasta you might see 10.

“Or, supermarkets might decide they don’t need nearly as much bottled water which is bulky and large in the shop.”

This situation could be improved but not totally resolved if the lorry driver shortage is turned around.

The source said: “It’s a tough and evolving situation and hard to say what will happen right now.

“The Government action on visas for HGV drivers has clearly been too little too late to resolve the issue and there will be some ­disruption at Christmas.”

DON’T MISS…
Lynsey Crombie: My exclusive ‘simple’ guide to keep spiders away [INFORMER]
What you should do in your garden right now – the crucial jobs [INSIGHT]
Lidl recalls milk after viral TikTok video showed carton full of lumps  [EXPLAINER]

There are plans in the works which involve letting European drivers do pick-ups and drop-offs an unlimited number of times over two weeks before coming home.

This would mean relaxing the ‘cabotage’ rules which state how many deliveries EU drivers can make in a 14-day period.

This plan should be in place for December, and the Government also announced at the start of October overseas drivers can take up six-month visas to do so.

However, only 20 drivers have been signed up so far and industry insiders are starting to fear sparse supermarket shelves.

He said on BCC Radio 4’s Today programme: “The Government clearly wants to save Christmas and be seen to be saving Christmas, and extra drivers will clearly help Christmas deliveries, so, from a simple, populist point of view, you can see what they’re doing.

“But there are consequences for hardworking UK hauliers who are suffering under a weight of staff shortages, poor roadside facilities, ridiculous waiting times to load and unload, and this simply doesn’t help UK haulage.

“We don’t want cabotage to sabotage our industry.”

Meanwhile, the UK’s largest union Unite says it will strike if improved conditions for lorry drivers are not improved.

The union has also demanded better pay for HGV drivers, arguing their treatment has been “nothing short of a disgrace”.

The strike would be the largest since the Winter of Discontent in 1979, which was known for widespread lorry strikes.

However, a strike is unlikely according to Transport Secretary Grant Shapps as he pointed out that Unite only represents 15 percent of lorry drivers.