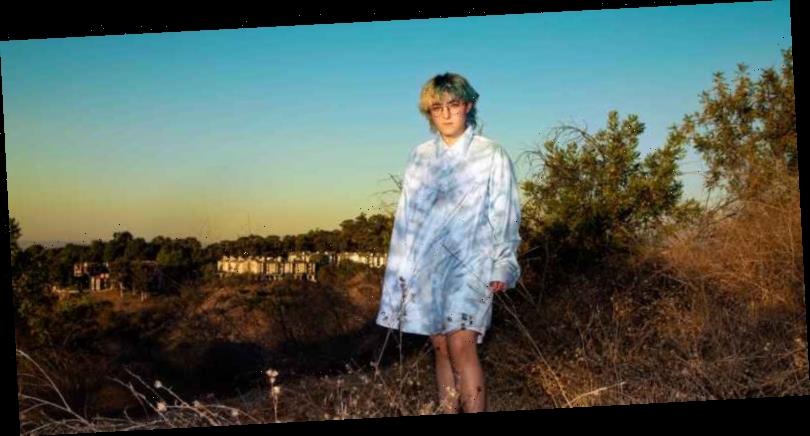 Claud Mintz didn’t really mean to leave college. It was the summer after their freshman year, and Mintz and Josh Mehling, who had just released an EP as Toast, were invited to open for the Los Angeles-based duo The Marias. The monthlong fall tour would require them to take a semester’s leave, and Mehling couldn’t. But Mintz was intrigued. “I was like, ‘I kind of want to do this. I want to see what happens,’” they said recently over video chat. (Mintz is nonbinary and uses they/them pronouns.)

Here’s what happened: After the Marias, they went on to tour with Girlpool, Girl in Red, and The Neighbourhood, making their way into bigger and bigger venues alongside increasingly major acts. “I just never made it back to school,” they said. That was nearly three years ago. Later this week, Mintz, who records as Claud, will release their first full-length album, Super Monster. It’s not only Claud’s debut—it’s also the first release from Saddest Factory Records, the new Dead Oceans subsidiary helmed by Phoebe Bridgers.

Still, Mintz had already spent the intervening period since leaving school independently putting out a stream of funny, tender pop songs about love and longing—and cultivating an ardent audience for them, without label representation. “Claud can do everything themselves,” Mehling, a musician and producer on Super Monster, told me recently. “It’s totally taking the D.I.Y. spirit and amplifying that.”

In high school, Mintz, now 21, started releasing songs on Soundcloud and booking their own shows at a local bowling alley. “I was like, ‘Yup, this is going to be my career, I’m going to be playing concerts all the time,’” Mintz told me, “but I didn’t have a good grasp of what that actually meant, you know?” They enrolled in Syracuse University’s music and entertainment industry program; during their first week, they met Mehling and Claire Cottrill, who records as Clairo, and instantly hit it off. After dropping out, Mintz continued honing their voice, polishing a sound that combines dreampop with late-‘90s hooks. “When anyone starts college, there’s this pressure to figure out exactly who you are in a short amount of time,” Cottrill wrote in an email. “I’d never seen someone actually blossom in front of my eyes before—until then.” (The band Shelly, a quarantine project created by Mintz, Mehling, Cottrill, and Noa Getzug, is featured on “Falling With the Rain,” the closing track on Super Monster.)

Perhaps that independent ethos is partly why, when Bridgers first approached them in late 2019 about signing, Mintz was ambivalent. “It’s scary,” they said. “You hear a lot of horror stories: Artists who sign horrible deals, and label people who treat artists terribly.” But Bridgers could relate, as an A&R who’s also a musician—and Claud recognized the value of working with someone who could help harness and execute their ideas. “When you’re self-made like Claud is, it’s hard to hand over power,” Bridgers said. “What’s awesome about Claud’s music is it’s so organic and they could have gone on forever without signing.”

The album was nearly done when Claud signed with Saddest Factory last summer. They had spent the first four months of the pandemic holed up in their childhood bedroom in Chicago, “rewriting and reworking every single day, just attacking these songs,” they said. (A brief aside: Mintz illustrated that bedroom for their website, including a poster of the Jonas Brothers. It turns out, Mintz may have once been a minor celebrity in Jonas Brothers fandom thanks to their—since-deleted—Instagram fan account. I suggested that, just as Billie Eilish’s childhood crush on Justin Bieber eventually produced a collaboration, a Jonas Brothers feature might be in their future. “I would literally die for that,” they said. Jonas Brothers, are you listening?)

That writing period proved fruitful: Leaving school, and their friends, to travel across the country hadn’t been easy. It took digging into Super Monster to get grounded again. The result is what Mintz described as their most candid and confident body of work yet. It opens with “Overnight,” which recalls, through pizza dates and parties, the giddiness of a romance at last consummated: “All the time spent with you in my head turned into things that we finally did overnight.” From there, you wake up in Claud’s world, filled with unbridled ecstatic highs and brutal lows. On the crystalline “Jordan,” for example, Claud sings: “I’ll keep saying sorry for mistakes I never made; I’ll keep saying sorry just to make it go your way.” (Originally, the song was supposed to be about Michael Jordan; now, obviously, it’s not about Michael Jordan.) Elsewhere, on “That’s Mr. Bitch to You,” the guitarist Melanie Faye plays a riff powerful enough to blast out of a teen hero’s boombox.

“They’re the kind of songs I would have wanted to hear when I was growing up,” Mehling told me, “finding people to relate to about queer relationships.”

And even though they’re releasing this album onto their biggest platform yet, Mintz’s imprint is still all over its sonic and visual landscape—one that, they said, hopefully will continue to give voice to other queer and nonbinary young people. “It’s been so hard for me to find proper representation of my own love life,” Mintz said. “And, I don’t know, if even just one person has a similar life as me hears the record and it reminds them that they can fall in love and have a full-ass life, then I’d be happy, you know?”