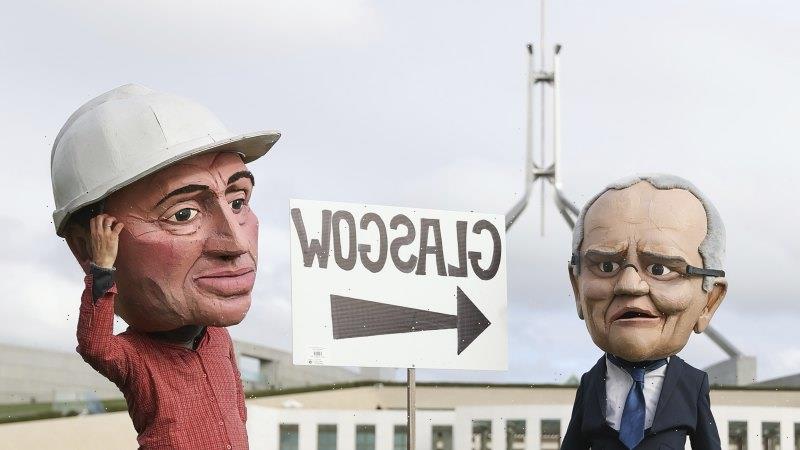 In 1997 leaders from around the world met in Kyoto, Japan, to sign an agreement on curbing emissions to fight climate change. In its 20 pages there is a passage that became known as “the Australia clause”.

Article 3.7, which the Howard government’s environment minister Robert Hill pushed for during the Kyoto talks, allowed Australia to reach the targets set for it by including in the carbon ledger emissions saved due to new state laws preventing farmers from clearing land, rather than by significantly reducing emissions. 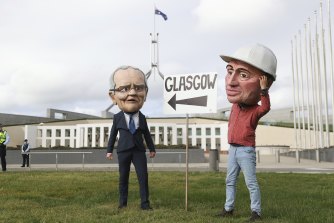 No one can deny that Australia kept its side of the bargain struck in Kyoto. But just on a week before the COP26 climate talks in Glasgow begin, the nature of that bargain is precisely what worries those organising the talks. If the 2015 Paris Agreement’s vision of holding warming to 1.5 degrees is to stand a chance of being met, it will not be enough to observe what one senior United Nations official calls the “creatively ambiguous” letter of the deal; nations will have to live up to its spirit. And for Australia and others, that means committing to deeper emissions cuts.

“We are on the verge of the abyss and we cannot afford a step in the wrong direction,” said UN Secretary-General Antonio Guterres when asked five weeks ago about the prospects for the Glasgow talks. “I’m not desperate, but I’m tremendously worried.”

When it was signed, the Paris Agreement went nowhere near meeting its declared targets. Instead nations agreed to commit to their voluntary targets known as Nationally Determined Contributions that “reflect the highest possible ambition”.

Then, as years went on, they were expected to increase those targets. If nations lifted their targets, the world might hold warming to 1.5 degrees.

Yet so far Australia has made no move to rachet up the pledge Tony Abbott made at the Paris talks to reduce Australian emissions by 26 to 28 per cent by 2030. Nationals leader Barnaby Joyce says it is unlikely that his party would support an improved commitment, even as Prime Minister Scott Morrison continues negotiations with Joyce and his party room over what commitments the Coalition can accept.

Despite this uncertainty, a broad picture of what Australia might offer the world is emerging from the political white noise, and the world is taking notice. 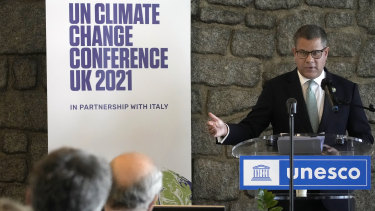 President of COP26 Alok Sharma said “Australia are our closest mates, and I want them to come to our party and sing the same songs.”Credit:AP

The Australian government’s “preference” for hitting net zero by 2050 now appears likely to become a firm commitment, with Morrison telling colleagues he plans to forge ahead even without the support of a small group of Nationals critics.

But the 2050 target is just the price of admission, says Professor Frank Jotzo, director of the Centre for Climate and Energy Policy at the Australian National University; it is the lowest hurdle a nation can clear to be taken seriously at the talks.

In Glasgow the focus will be on 2030 targets. Most observers now believe that Morrison will travel to Glasgow armed with evidence that Australia is likely to beat its 2030 target by a healthy margin, potentially bringing its reductions close to 40 per cent.

Would such a projection satisfy Australia’s international peers? Not all of them, says Jotzo, also a lead author on the key climate reports prepared by the UN’s Intergovernmental Panel on Climate Change.

Jotzo says Australia is already out of step with what many other nations have pledged.
As Alok Sharma, the British cabinet minister who is president of the COP26 talks, puts it, the Group of 20 wealthy nations emit 80 per cent of the world’s greenhouse gas pollution and are the key to preventing catastrophic climate change.

Among G20 nations, Australia has the second-highest per person emissions after Saudi Arabia and will be among the last to commit to net zero. It has among the weakest 2030 targets and will be one of the few not to increase them.

Jotzo also notes that in having such high per capita emissions, Australia has greater opportunity for reductions. Ambitious federal policies to speed up the displacement of fossil energy, help industry invest in cleaner processes and equipment, accelerate the rollout of electric vehicles or even introduce motor vehicle emissions standards in line with global norms would have a huge impact on national emissions.

Instead, he says, the government has a history of setting itself easy targets.

As was the case with Kyoto, land-use changes and the deployment of renewables by households and state governments will account for Australia’s success in meeting its relatively weak 2030 goals, Jotzo says: “It’s like an athlete setting themselves the goal of running 100 metres in 35 seconds and then celebrating when he achieves it.”

Bill Hare, chief executive of Climate Analytics and a former IPCC lead author, agrees.
Australia’s key international friends, the US, Britain and Canada, he says, “have left political blood on the floor” in their efforts to reach credible targets. “If Australia marches in and says ‘don’t worry we’re going to beat our target’ they are going to say, ’well, why don’t you put it into law? Why can’t you match what we are doing?”

Not all observers are equally certain a projection, rather than a commitment, would be so poorly received.

One of Australia’s former lead climate negotiators, Professor Howard Bamsey, believes if a projection was buttressed by a credible emissions reductions plan in line with net zero by 2050, it might be welcomed. But he adds: “I just don’t see how you get to [net zero by] 2050 without substantially beating the current 2030 target.”

On October 10, Sharma told The Financial Times he hoped Morrison would do more: “Australia are our closest mates, and I want them to come to our party and sing the same songs – and that means making ambitious commitments on emissions reductions by 2030 and, obviously, a net zero target.”

Alex Scott, who heads a climate diplomacy and geopolitics team at the British environmental think tank E3G said that far from being seen as more ambitious, a projection would be regarded as breaking Australia’s Paris promise: “The IPCC says we need to halve emissions by 2030. Australia’s current targets aren’t even close to their fair share and will be laughed out of the room.”

Energy and Emissions Reduction Minister Angus Taylor disagrees. Earlier this week, he emphasised that Australia had achieved a 21 per cent reduction on emissions since 2005.

“Australia’s emissions accounting is the global gold standard. No other country offers more comprehensive or timely reporting. We prepare our accounts according to IPCC guidelines and they are reviewed annually by expert teams assembled by the UN.”

And even if the world does disapprove of whatever package Morrison can eventually secure from the Nationals and bring to Glasgow, does it really matter? By design the Paris Agreement lacks explicit penalties for a perceived failure to properly contribute.

Jotzo and Hare argue that Australia aligning itself with a handful of nations reluctant to act rather than its traditional peers and friends has its own costs.

The European Union has already declared it will introduce a tax on imports of carbon-intensive goods crossing its borders from nations without their own carbon taxes. The proposal would have little impact on Australia at present, but that will change if it is replicated more widely.
And diplomatic issues have a tendency to be linked, even if not explicitly, says Hare.

Australia’s closest strategic allies have declared climate change to be among their greatest concerns. How long will it be before the climate issue is raised in talks over other issues?

Even aside from national self-interest, friendly nations are concerned that Australia’s positioning weakens the broader push for action.

Doug Sonnek, economic counsellor at the US embassy in Canberra, told the Herald and The Age that international concern about Australia’s stance went beyond the amount of emissions its targets allowed: “There is also concern that in standing apart from an otherwise united effort by developed nations in pushing for action, Australia makes it harder for that bloc to urge more action from large developing major emitting nations such as China, India and Indonesia.”

Richie Merzian, director of climate and energy policy at the progressive think tank the Australia Institute, says that if the Australian position gives cover to other nations not to act, the Morrison government would share the blame for COP26 failing.

Australia has risked and worn international opprobrium on climate in the past. During the last COP meeting in Madrid in 2019 Laurence Tubiana, a former French environment minister and architect of the Paris accord, called Australia a cheat over a dispute about another carbon accounting mechanism, so-called Kyoto carry-over credits.

Way back in 1997, after the Kyoto talks in which Australia secured not only the Australia clause but an 8 per cent increase in emissions, then EU environmental policy spokesman Peter Jorgensen described the outcome as “wrong and immoral … a disgrace”.

This time the stakes are higher. There is less time for the world to commit to more action.

COP26’s host, British Prime Minister Boris Johnson, has identified the talks as an epochal moment. Should they fail, he told the UN General Assembly in September, our grandchildren will know whom to blame.

Even the Queen has signalled her displeasure, allowing herself to be overheard venting frustration at world leaders who had not yet committed to attend. “It’s really irritating when they talk, but they don’t do,” she said.