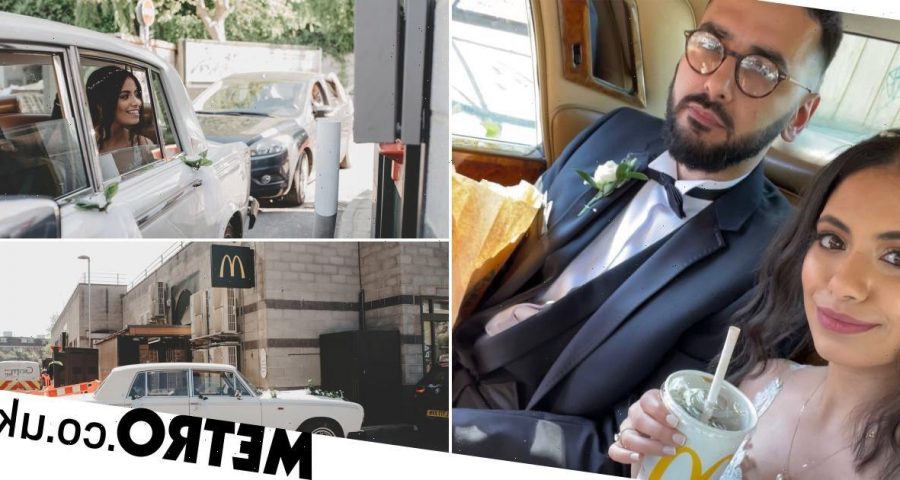 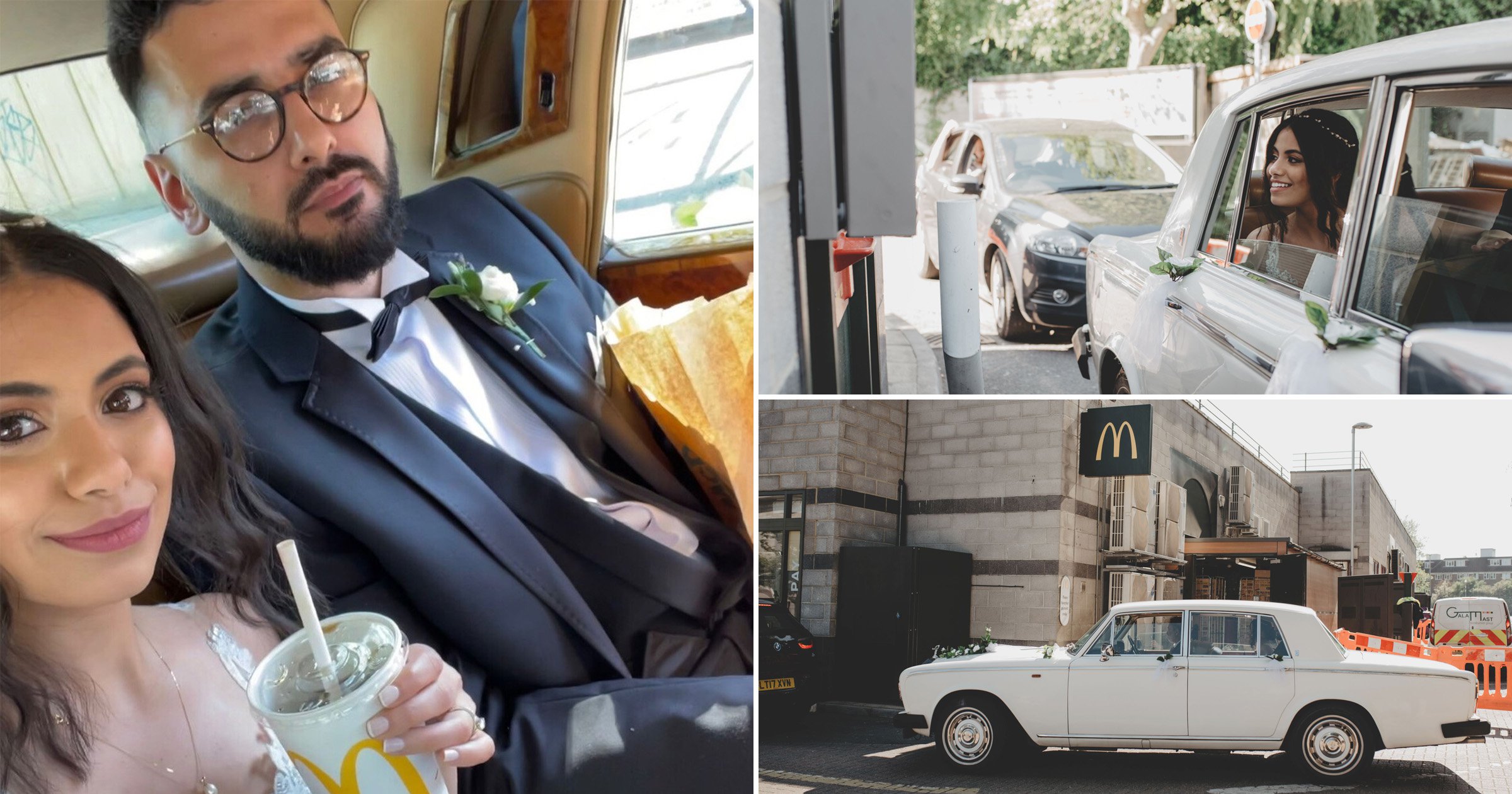 Throughout their relationship, Sara Youssif, 25, and Abz Salama, 27, have enjoyed getting a McDonald’s together.

So when it came to their wedding, they wanted to incorporate it into their big day.

After the ceremony, the couple eloped in their wedding car with their photograph to grab some food at the drive thru.

The fun shots were snapped after the ceremony on May 31 by wedding photographer Jake Owens at the Finchley Lido branch of McDonald’s in Barnet, London.

History teacher Sara and specialist mental health pharmacist Abz, from Greenwich, London, had their second date at the fast food chain and have enjoyed many more times throughout their eight years together.

Sara said: ‘It all worked out well, we were very chilled on the day, and we did what we felt like doing. And we felt like going to McDonald’s.

‘The drive through staff were surprised to see us – they were smiling, but surprised. I did ask if they had something they could do for us, but they said no.

‘So we did ask if there was a honeymoon special. They did say I was the first bride, and we did get a lot of congratulations from people who were passing by.

‘We’ve always talked about the McDonald’s thing, even on our second date, I was like “just take me to McDonald’s”.’

With the wedding celebrations throughout the day, Sara decided to skip her usual order, but Abz took the opportunity to stave off some hunger.

She said: ‘I didn’t get a meal on the wedding day – just a coke and I took a few chips. But in normal times, I would get a quarter pounder, coke with ice and twenty nuggets to share – and double cheeseburgers on the side.’

Abz added: ‘We both love McDonald’s, as funny as that sounds. After the wedding took place, we just said ‘Let’s do it. Why not?’.

‘We’d always joked about it but when the day actually came, we thought we’d do it. It was good though – I was really hungry. I got a sweet chilli chicken wrap, can’t go wrong.

‘Our family got a lot of laughs out of it. I remember when we got out of the wedding car at the reception, my uncle saw me carrying the empty bag, he said “You’re kidding”.’

The wedding itself came after much delay due to coronavirus restrictions.

Abz said: ‘Originally, we were meant to be getting married in August last year, but then it was postponed. Long story short, when we got married, it was the fourth time we’d planned it.

‘But even up until that day, we weren’t sure if it was actually happening. Boris Johnson could have appeared on TV and announced there’d be no more weddings.

‘The wedding was such a surreal experience and the day itself felt like such a blur.’

Sara said: ‘It put the focus more on what mattered, which is the fact that we were getting married and we had our families with us.

‘And we had McDonald’s with us. What more could you want? We had everything we needed.’

Jake Owens, 27, the wedding photographer, said he loved doing the shoot for the couple.

Jake said: ‘We’d actually just finished up taking the couple’s official portraits in Hampstead, when the idea of stopping in a drive through was brought up.

‘It was a hot day, and we were all hoping to get a cold drink, I think. As we sat behind them in the queue I thought, I best jump out and grab a few frames here.

‘I can’t remember ever doing a wedding shoot at an eatery, but I’ve always wanted to do some wedding photos at an American style diner though. Something about that Americana, cool vibe really appeals to me.’

Jake said: ‘As a business, myself and my business partner Tim are always looking to take wedding shots that stand out, and aren’t traditionally ‘wedding-y’ where we can.

‘So the idea to grab some photos as we went through the drive through at McDonald’s seemed like a good, if somewhat silly idea.

‘I tweeted out the pictures to McDonald’s. As with most things I tweet, I’m usually trying to be funny.

‘Although, the subtext was that I was sort of hoping that McDonald’s might offer to give us a voucher for a happy meal or something. You have to be in it to win it.’