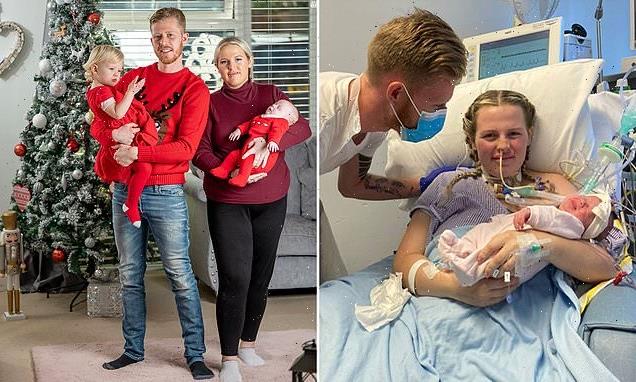 A young mum who gave birth while in a coma after contracting Covid has finally been allowed to go home after spending nearly three months in intensive care.

Saskia Lane, 21, from Partridge Green, West Sussex, tested positive for Covid on August 27 and was admitted to intensive care at Princess Royal Hospital in Haywards Heath after breathing difficulties.

Saskia, who was eight months pregnant at this time, was sent down for an emergency c-section on September 4 to help her body recover.

But devastatingly, Saskia wasn’t woken up following the birth of her daughter, Betsy Mae Blackman, who is now three-months-old, after doctors decided to keep her in an induced coma to give her the best chance of survival.

Saskia was able to go home on November 6 to her partner and two children – Betsy and Eliza, two – and is able to spend Christmas at home with her family.

The mother is now sending a plea for all unvaccinated pregnant mother to get the jab before it’s too late. 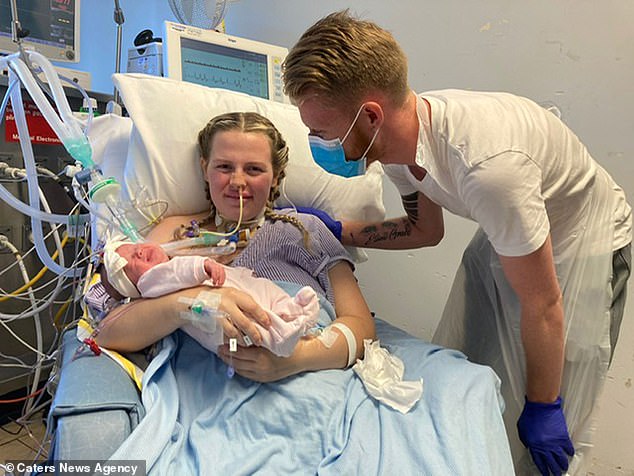 Saskia Lane, 21, from Partridge Green, West Sussex, spent three weeks in a medically induced coma and three months recovering from Covid-19 in intensive care after testing positive in late August, while she was eight months pregnant. She has now been able to make it home for Christmas. Pictured in hospital after waking up from her coma and meeting her daughter for the first time 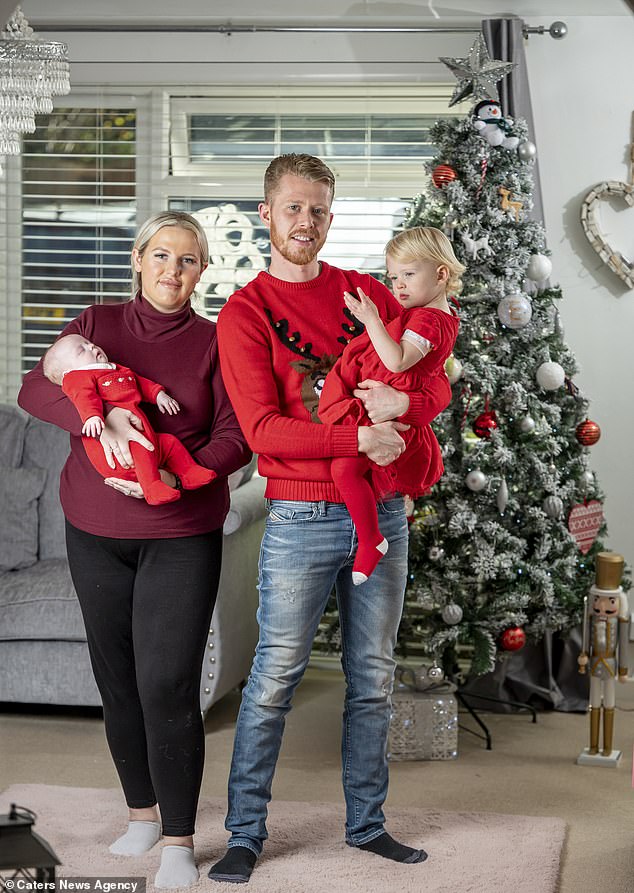 Saskia explained: ‘Seeing Betsy for the first time was like giving birth all over again but this time, I was awake and there was an overwhelming sense of achievement.

‘Although I met her a month later, I was just so relieved we was finally together and I could finally start a bond with my baby after being separated for so long.

‘I was in so much pain – unable to speak, still ventilated, but none of that mattered during that special moment.

‘I remember not wanting to ever let go; it was the hardest goodbye seeing them leaving the hospital and all I wanted was to go back with them and start our journey as a family of four. 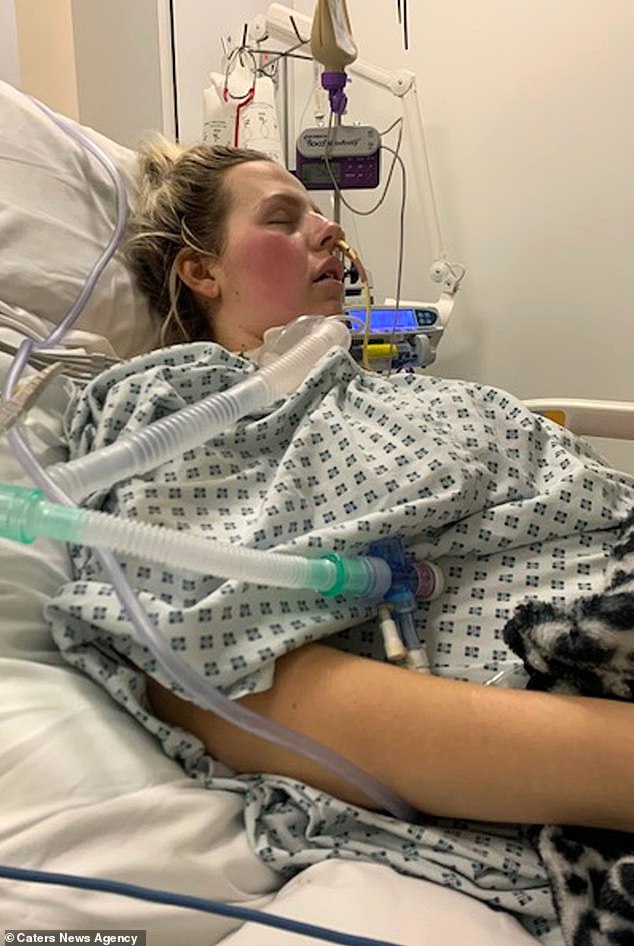 Saskia was induced into a coma after giving birth to Betsy on September 4, and stayed under for three months 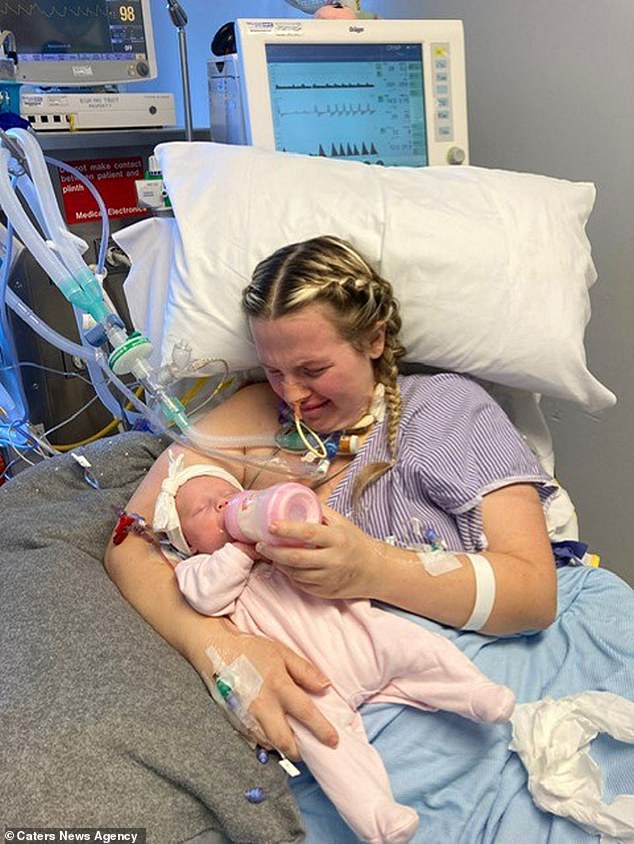 ‘I began giving up hope that I was ever going to come home because everyday was so different; I hadn’t seen the outside world since August so it was very scary coming home.

‘Once I arrived home, it was like I had never left and just sitting on my sofa being able to hold and feed my baby was how it should have been from the beginning.

‘Our tree is up and we are getting into the Christmas spirit and this year, it feels even more special to me and my family because at one point, they thought I wouldn’t be here to be able to celebrate it.

‘It’s Betsy’s first Christmas and Eliza is starting to understand the magic of Christmas and it would have broken me if I had missed Christmas with my children so I feel like the luckiest mummy in the world.’ 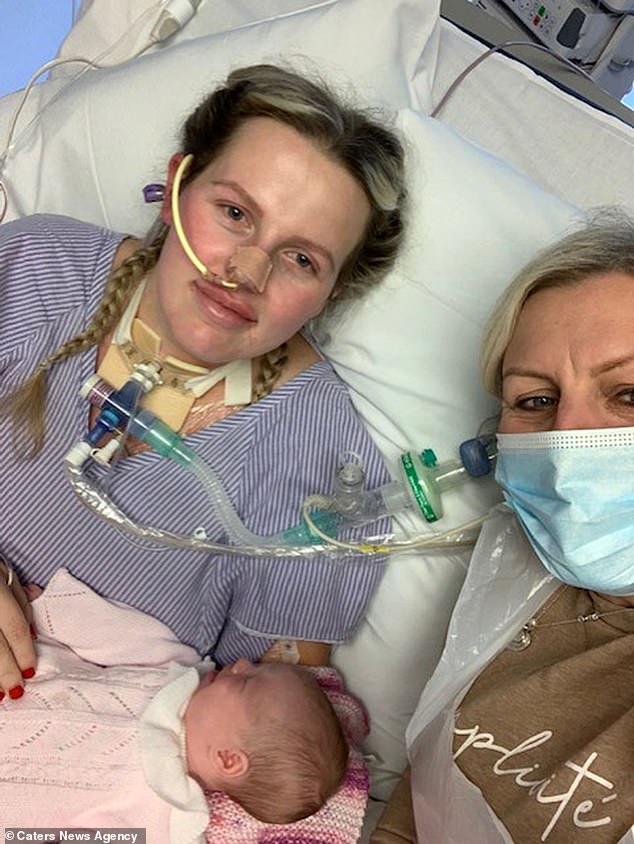 After waking up from her coma, Saskia, pictured with Betsy and her mother Becky, spent two more months in hospital 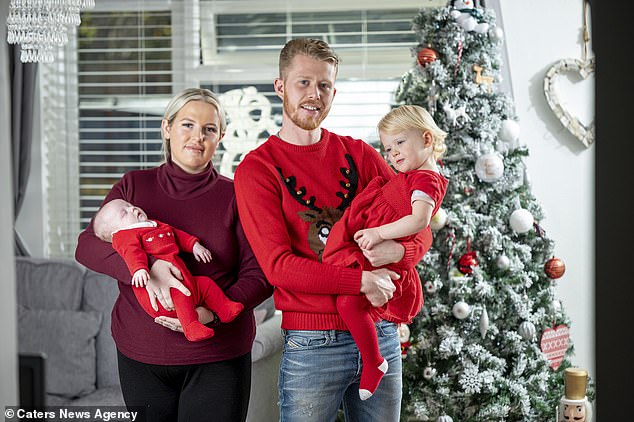 After a rough autumn, the family are looking forward to spending a magical Christmas together

After being reunited with her children on September 30, Saskia wanted to carry on fighting so she could make it home in time for Christmas with her family.

But despite the excitement of coming home, Saskia was left feeling anxious after losing her independence whilst in hospital.

She added: ‘After seeing Betsy and then finally being reunited with Eliza, it gave me so much strength to keep fighting so I could get home to my girls.

‘I was scared to come home; I kept questioning the nurses because I wasn’t sure it was 100 per cent safe. 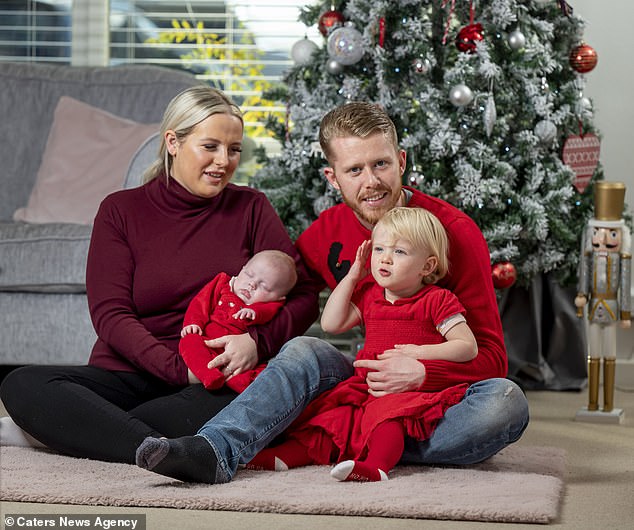 Saskia admitted she was scared of going home because she was not sure it was completely safe. Pictured with her family 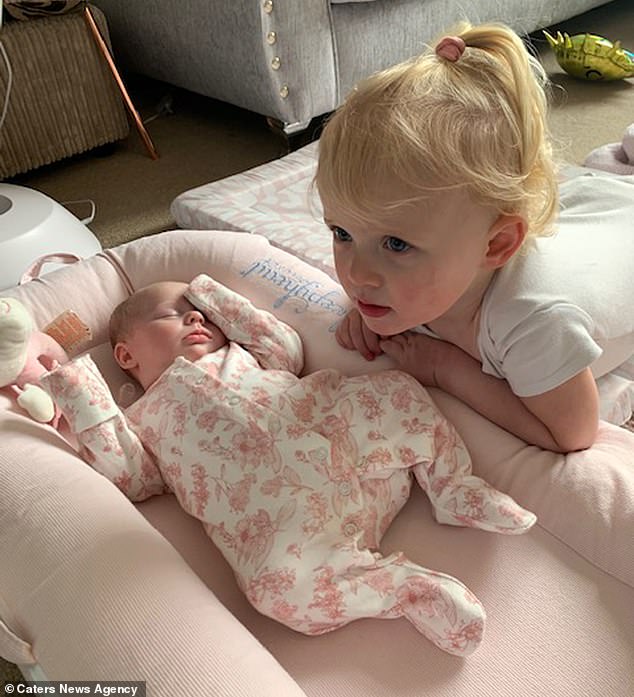 ‘As much as I wanted to go home, I was so anxious about something going wrong again and I had completely lost my independence.

‘I felt so proud of myself that I had made it home and once I was there, all those worries went away.

‘I have long term covid and my lungs are still not considered normal which does affect my day-to-day life.

‘This whole experience has impacted me both physically and mentally but I try my best to focus on the positives that I’m alive and hopefully have the rest of my life enjoying my amazing children. 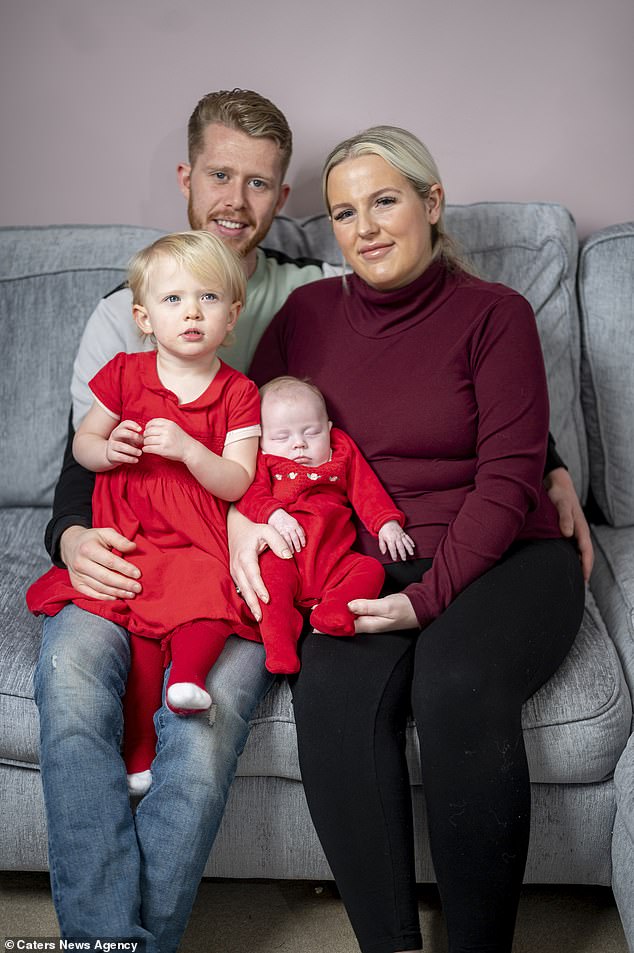 Saskia admitted she is still recovering from her Covid ordeal and has ‘good and bad’ days. Pictured with Lee and the girls 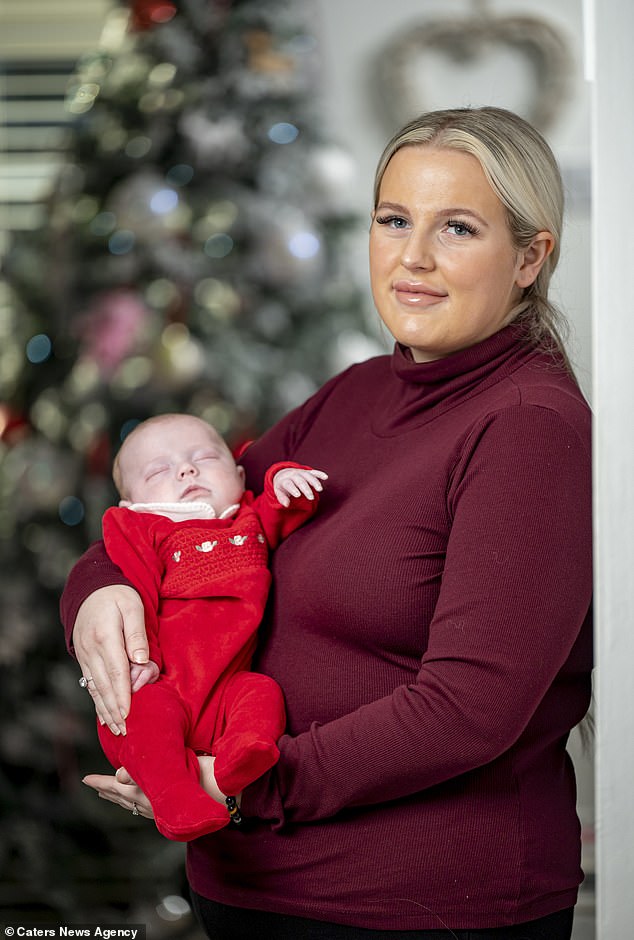 The mother-of-two, pictured with Betsy, has therapy to help her mental health following her time spent in hospital

‘I’m having therapy to help me recover mentally from this trauma and do have regular hospital appointments to monitor my recovery and lung changes.

‘But I try my best to think it could have turned out a lot worse, two young children could have lost their mummy and I’m just glad they will never remember that time in their lives.’

The family are planning their Christmas Day and say it will be more special than ever now that Saskia is able to join in with the festive fun. 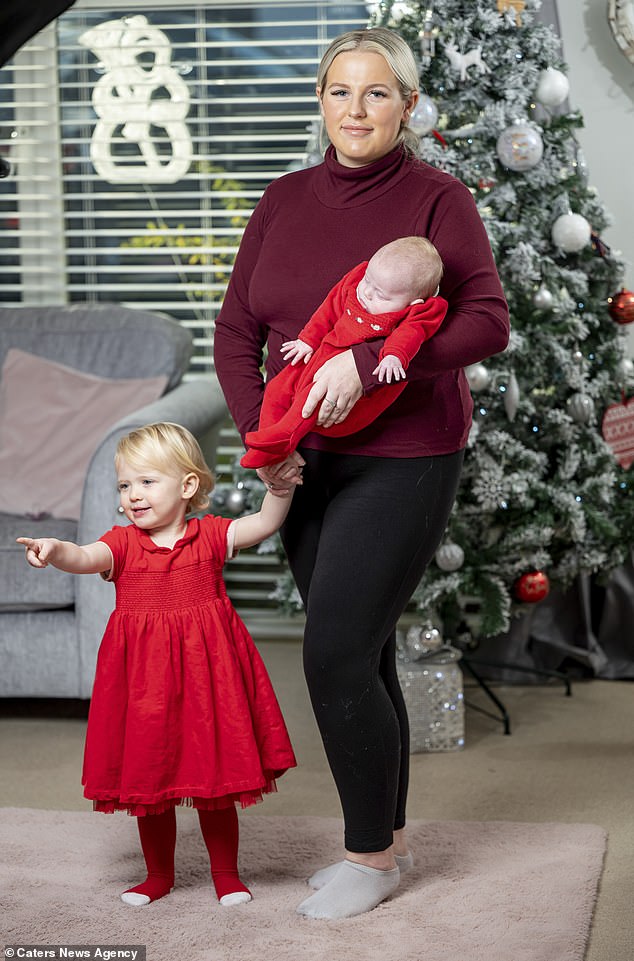 With Saskia free from hospital, the family are looking forward to spending Christmas together. Saskia said Eliza is starting to understand the magic of Christmas 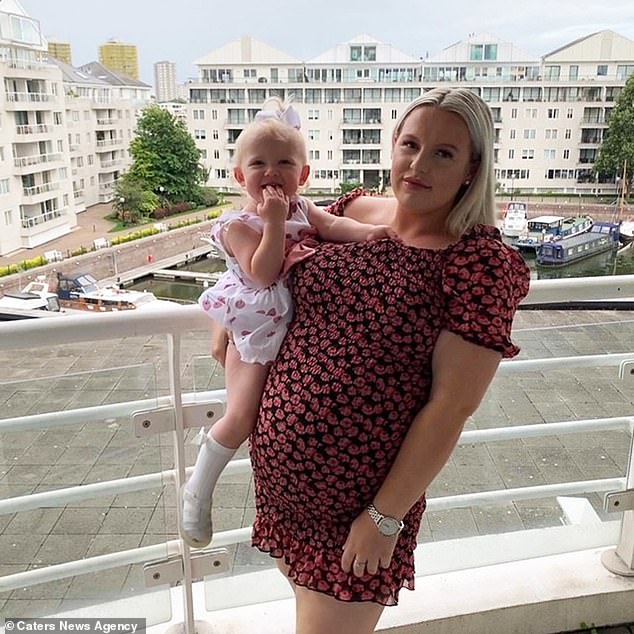 Pictured: Saskia with Eliza during her pregnancy with Betsy, before she contracted Covid-19 this summer 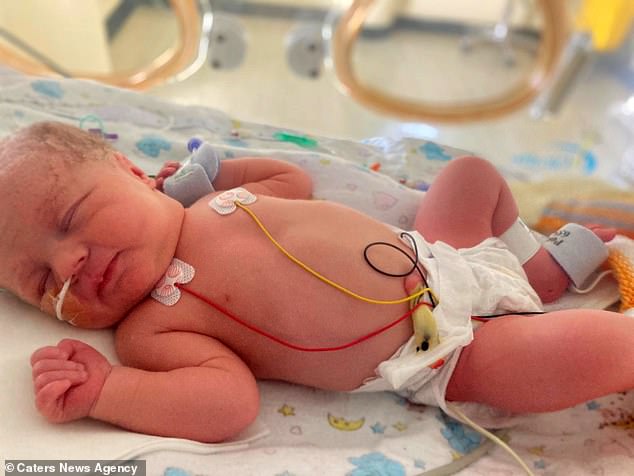 Betsy, pictured in hospital. Saskia said she wished she had gotten vaccinated before giving birth

Saskia said: ‘I want to try enjoy the build up as much as possible; one thing I’ve learnt from my experience is to live everyday like it’s your last as everything could be taken away from you in a blink of an eye.

‘We are such a close family, most of us live in the same village and I would see my mum most days so being away from them all was torture.

‘We are all so glad to be back together and making memories again. I would be lost without my family, how they all mucked together to help my partner and the girls whilst I was in hospital was amazing.

‘They all kept my name alive to Eliza and made life as normal as possible for her despite her not having her mummy; I’m very lucky to have the family I have.

‘I feel it’s so important to share my story to pregnant women as I was unsure about the vaccination during my pregnancy but I wish I had it done before it was too late.

‘As a mum, all you want to do is protect your children and the misinformation out there can really scare you off getting the vaccine but it is safe.

‘More and more unvaccinated pregnant women are ending up in a coma or even sadly losing their lives due to Covid so please talk to a doctor or midwife to get the correct information about the vaccination rather than being brainwashed by social media posts.

‘Our NHS is so incredible; the ECMO machine alongside the hard work of all the consultants and nurses saved my life and I will forever be grateful for giving me the chance to carry on doing my favourite job in the world, being a mum.’ 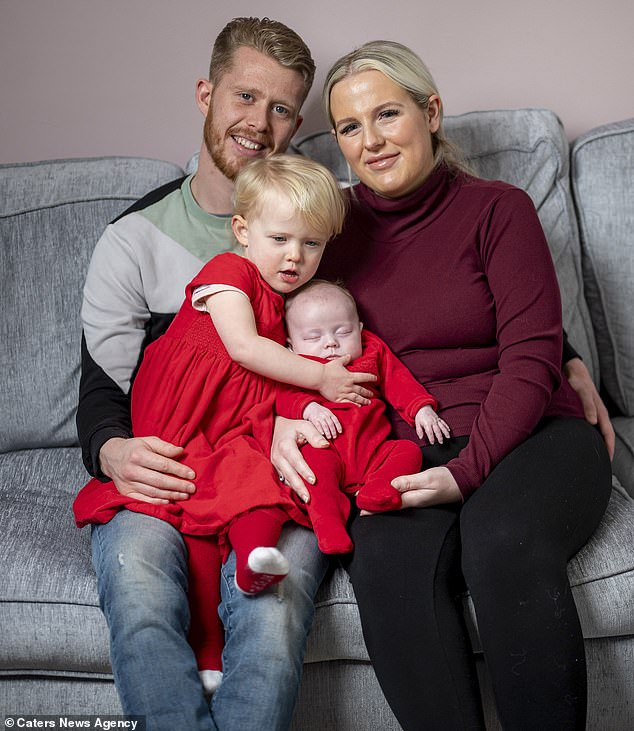 Saskia, pictured with Lee and their daughters, is pleading for pregnant women to talk to their GPs about the Covid-19 jab to get the right information on what to do 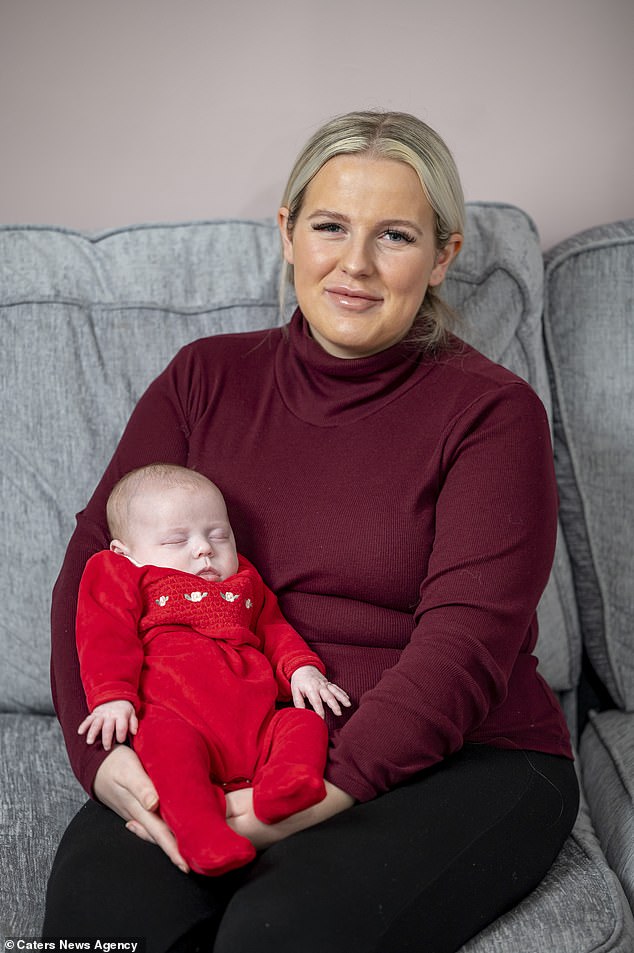 Saskia, pictured with Betsy, admitted she was scared off getting the vaccine but said she regretted it 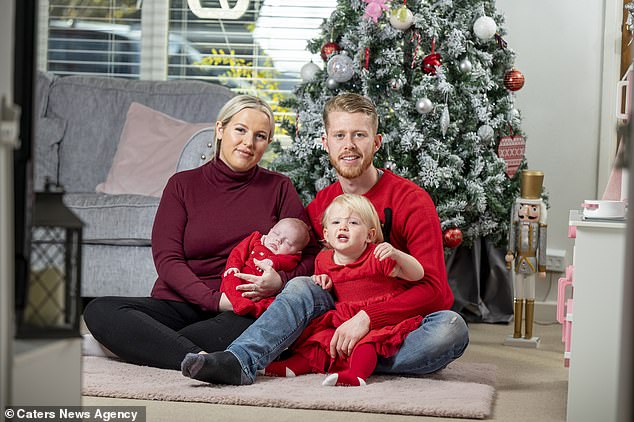 The mother-of-two, pictured with her family thanked the NHS staff who looked after her in hospital and nursed her back to health 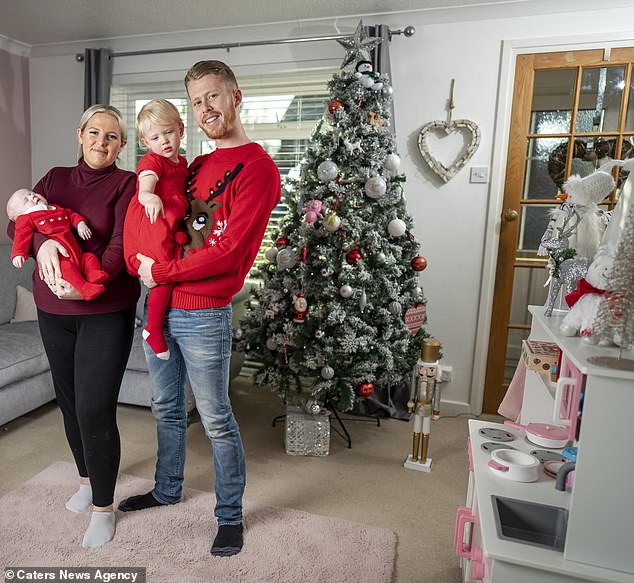 Lee, pictured, made sure to talk to his daughters about their mother Saskia when she was in hospital to ‘keep her name alive’ while she was being treated