Covid Big Brother! Birmingham Uni flatmates who’ve ALL tested positive say they’re ‘losing their minds’ at being ‘caged’ in their rooms – admitting there’s been ‘many rows’ and they just want to ‘be out clubbing’

A group of Birmingham University students – who’ve all tested positive for Covid – say they feel like they’ve been ‘caged’ after being forced to self-isolate in their student digs for two weeks.

Second year students Zack Cohen, Louis Shaw, Rafi Jacobs, Michael Abram – all from North London but studying at the Midlands University – have coronavirus, along with two other flat-mates they share their six-person student accommodation with.

The undergraduates, all 19, are now almost nearly through their quarantine and say they’ve faced ‘many arguments’ as they struggle to exist in cramped confines. Rafi was the last housemate to test positive, getting his result on Monday.

While rumours of raucous ‘Covid positive’ parties have been swirling around UK campuses, with freshers at the University of Manchester and Northumbria University allegedly throwing 24-hour shindigs, it’s certainly not happening in the flat these students share – with the friends forced to even stay away from each other, having tested positive at different times. 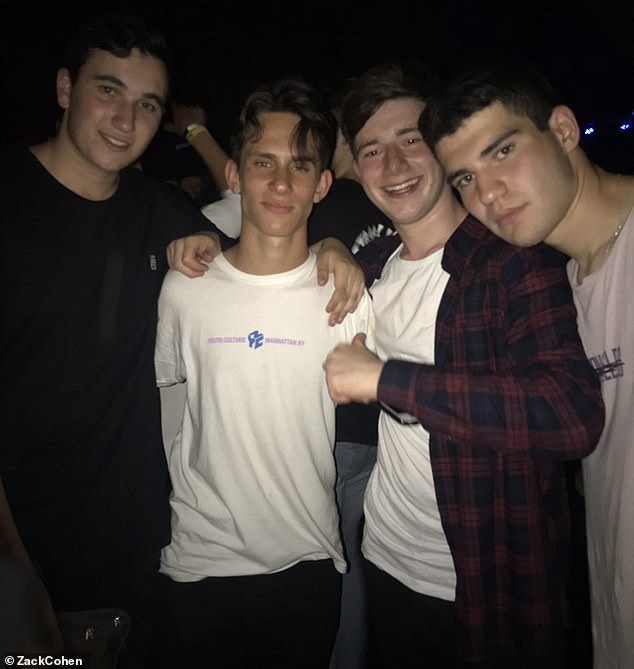 Party’s off: Student housemates (pictured from left) Michael Abram, Zack Cohen, Rafi Jacobs and Louis Shaw, all second year students at Birmingham University have been ‘caged’ in their accommodation along with two other flatmates after the whole house tested positive for coronavirus 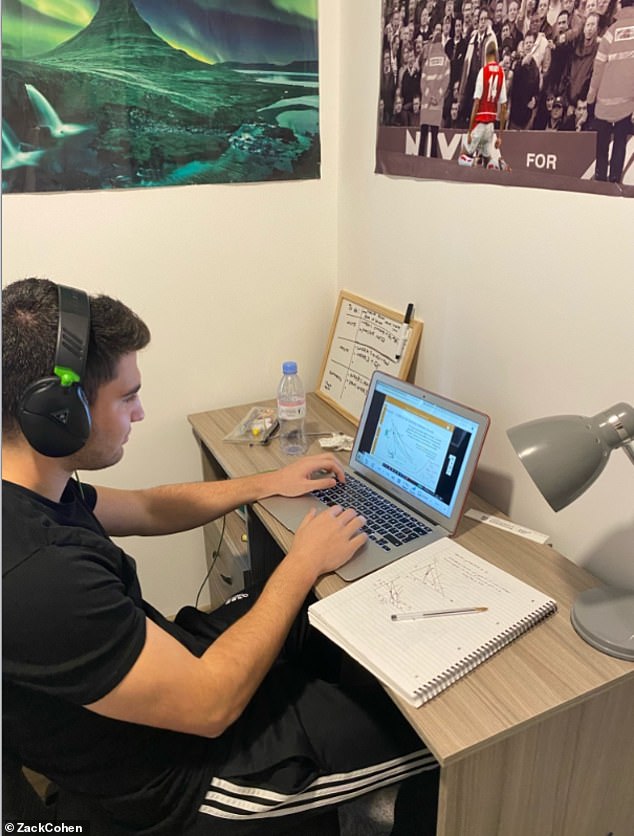 Louis Shaw, 19, who was forced to stay just in own his room for three days before his other flatmates tested positive said cabin fever quickly set in and it’s been extremely hard feeling ill and not being able to leave the confines of his room 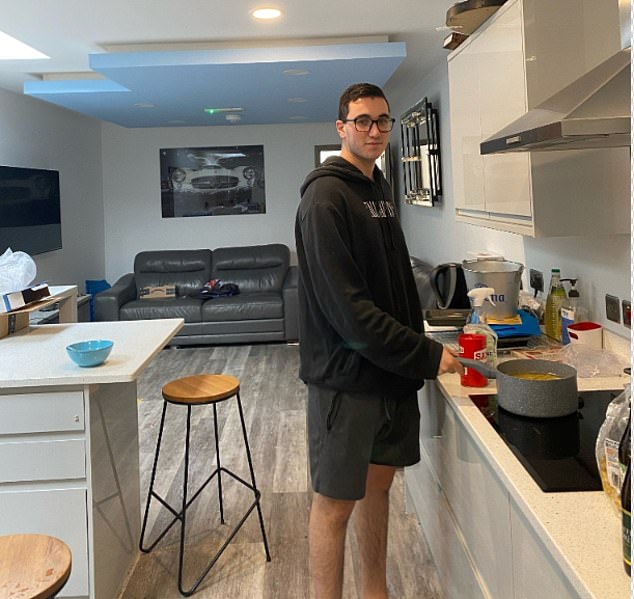 Petty squabbles: The students, who joined the house as ‘best friends’ say it’s been impossible not to argue over petty things while cooped up in their cramped accommodation 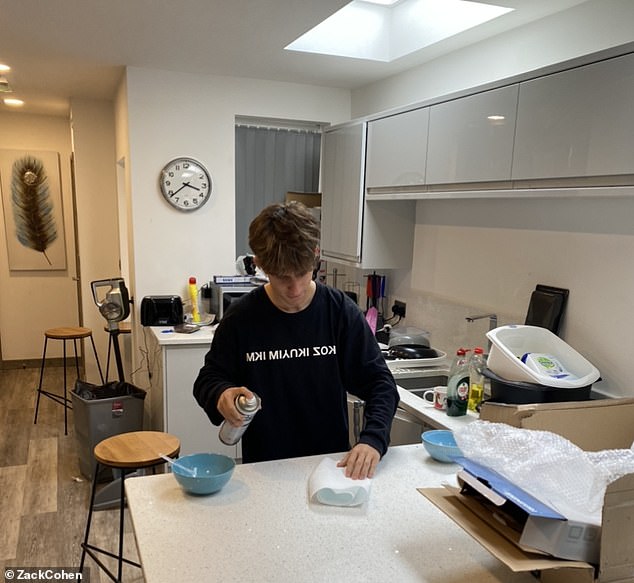 Cleaning: Zack, 19, admits that he thought he’d be out ‘clubbing’ by now, not forced to stay at home, and maintains that he only socialised in groups of six before catching the virus

Louis Shaw, who’s studying Economics, says getting Covid at different times has been the hardest part.

He told FEMAIL: ‘There were three days where there was only two of us who were positive in the house and we had to isolate in our rooms. They were three very long days and cabin fever quickly occurred.

‘It’s hard to not lose your mind whilst stuck in your room but the way I coped was just trying keep a normal routine. There was tension in the house about what the rules were and when the positive people could leave their rooms.

‘Eventually four people tested positive and there were some disagreements about continuing self-isolation or whether to isolate as a whole house.’ 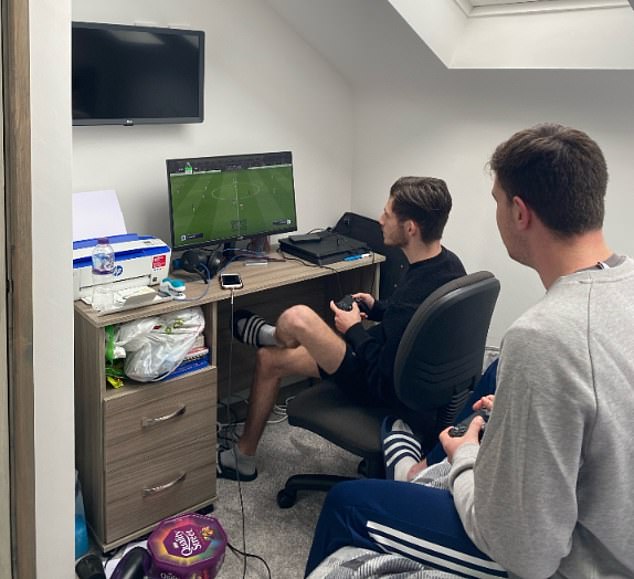 He explained: ‘I’m living with friends from last year and it’s been extremely challenging this past couple of weeks being kept in the “cage” of my house.

‘Throughout the first stages of COVID and the long summer that ensued, what kept me going was the excitement of going out clubbing with my uni friends, meeting new people and going to the pub to watch the football at university.’

Zack, who says he’s experienced a loss of taste and smell, but hasn’t been hit too badly by the virus, admits he was ‘naive’ to think that it would be so easy, and maintains that the first few weeks of university life saw them sticking to the rules ‘going to pubs in groups of six.’

Not being able to phone his parents, or get to the shops has been ‘frustrating’ and he’s found it very hard to sleep during the last ten days, says Zack. 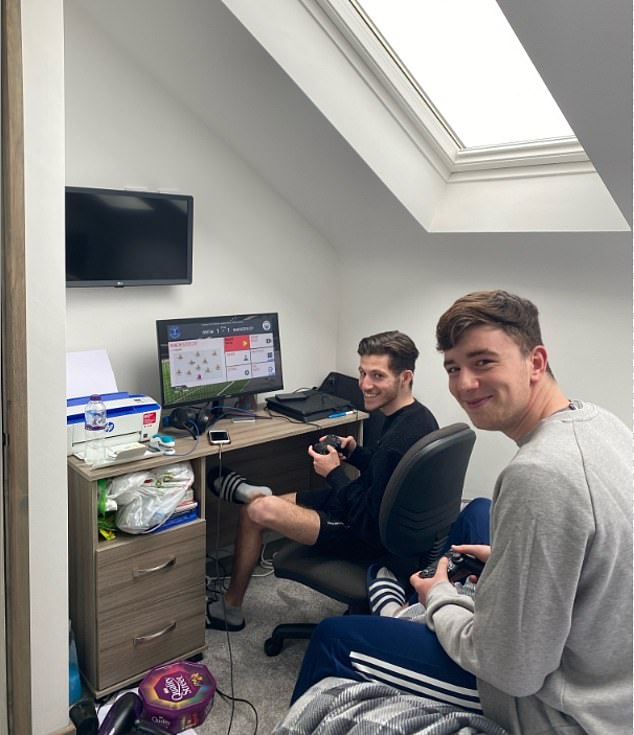 Zack and Rafi compete on the Xbox but both say the experience has been really difficult, and have had to rely on grocery deliveries and food parcels from friends

And food has been tricky too, he adds: ‘We’ve had to rely on the kosher delivery service from the deli as well as friends dropping food packages outside of our house for food as well as daily takeaways, even though I have lost my sense of taste and smell.’

While the students have Xbox to entertain them, tension has understandably crept in: ‘There’s been many arguments with not being able to escape from tension, everything gets brought up to the surface.

‘Whether it’s over what programme we’re watching or a mess someone hasn’t cleaned up, there’s been a multitude of petty arguments for little reason other than boredom.’ 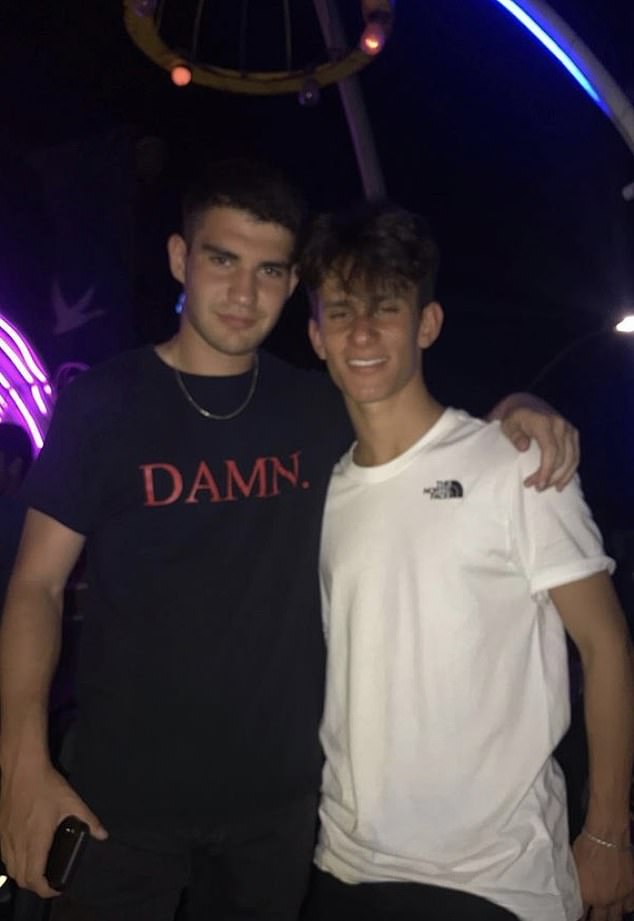 Fellow flatmate Rafi Jacobs, who’s studying Political Science and International Relations told FEMAIL that isolating in just one room has been a nightmare.

‘I am currently isolating on my own in my room as I tested positive last. This is a very hard time for me but I am coping through keeping up with the work that the university has set us, playing video games and FaceTiming friends, despite being in bed for three days with a harsh cough and fever, which I am still experiencing.

‘Its such a weird university experience but I am adapting to it slowly.’

While Michael Abram, who’s studying Electrical Engineering, says it’s been fun living with ‘my best mates’, his diabetes has meant he’s had to be extra careful.

‘Getting Covid hasn’t been a nice experience for me – I was stuck in my room for three days and it was hard to control my blood sugar levels. Thankfully, I was able to stay on top of my blood sugar levels and now I’ve got to catch up on all the work I’ve missed this past week or so.’