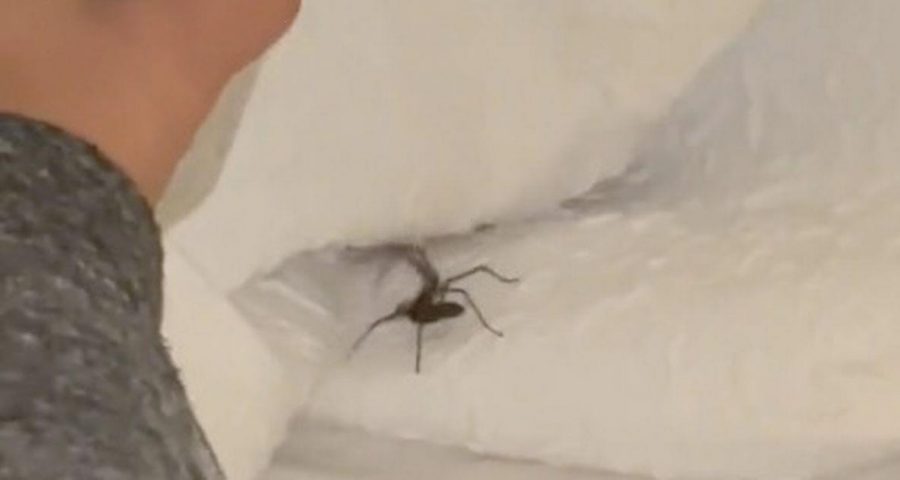 A woman has left viewers horrified after showing a video of herself catching a huge spider that she felt "crawling" on her while she lay in her bed.

In a TikTok video, user @leah111222_ is holding a plastic box above the shifty spider and attempting to trap it.

The critter scurries around on her duvet before Leah pounces and manages to get it inside the box.

It then reacts in an agitated way and tries to find a way to escape while Leah scrambles to find a piece of paper to slide under the bottom of the box.

In the on-screen-caption, Leah writes: "So these are the spiders everyone keeps finding in the UK.

"It crawled up my leg as I was in bed. Where the f*** are they migrating from?"

Leah said in the comments that the spider felt "heavy" when it was crawling on her body and reckoned she would have fallen asleep without noticing if the lights were off.

Since she uploaded the clip on Thursday (September 2) it has been watched nearly 200,000 times and freaked out people with arachnophobia.

One user confessed: "I swear to god if it touched my leg I would've been in a coma."

"I would have screamed so loud and then moved house," admitted a second viewer.

Another user shared: "Same girl and I had to kill it on my bed and I got spider guts all over my bedsheet."

Someone else said: "I have one of these in my bedroom. I refuse to sleep anymore.

"It's not paper and cup, it's a bathtub and slate."

Meanwhile, some people attempted to identify the critter and most believed it was a native spider rather than one that had "migrated".

Someone said: "Oh that's a wolf spider I've seen a lot of 'em before everyone freaked out."

Another wrote: "Not a wolf spider, it's called a 'common house spider' and they've been around for centuries."

You are most likely to come across giant house spiders in the autumn when the males looking for females to mate with, according to Wildlifetrusts.org.

They run at speeds of half a metre per second which makes them one of the fastest spider species in the world.