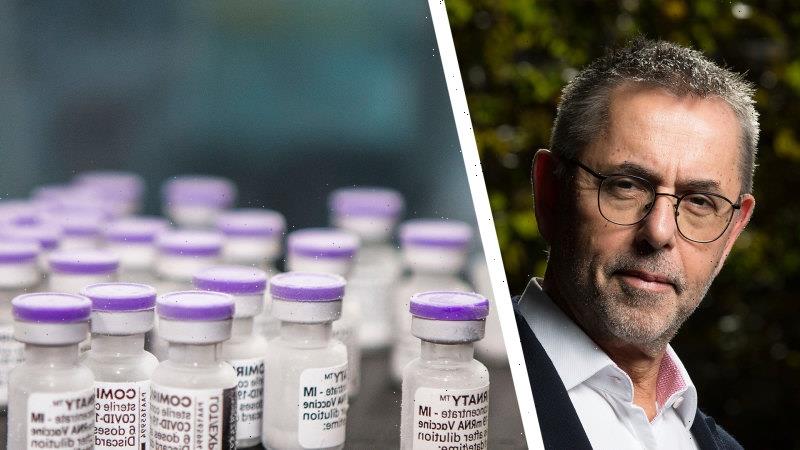 It started with a radio interview three weeks ago. Speaking on ABC Melbourne, the broadcaster’s Coronacast host Norman Swan said three unnamed sources told him the same story about Australia’s apparent mishandling of a vaccine deal with Pfizer last year.

That account then made its way onto Twitter where, two weeks later, it rapidly spread. It then found a home in stories on an independent media site and grabbed the attention of Labor. 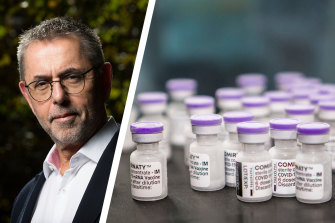 ABC’s Norman Swan stands by his reporting that the government botched a Pfizer deal in July last year, which was based on anonymous sources but denied by those in the meeting.  Credit:Janie Barrett/Meredith O’Shea

It culminated with Victorian Acting Premier James Merlino repeating it as fact on Tuesday, and again on Wednesday.

“Our nation had a sliding doors moment last July. Last July, there was an offer of Pfizer to the Commonwealth government that would be enough for our country and they didn’t take it up,” he said.

But the story has been denied by Pfizer. The federal government categorically says it is not true, and senior Department of Health bureaucrats who were involved in the Pfizer deal gave evidence to a parliamentary committee that no such deal was on offer.

“Both Pfizer and the department would say that those claims in the media are incorrect,” the department’s first assistant secretary in the COVID vaccine task force Lisa Schofield told the committee on Monday night. 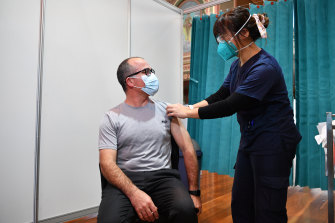 Swan’s account went like this: Pfizer wanted to use Australia as a global example for a rollout of its vaccine, but in a meeting in July last year, a rude and inexperienced representative from the Department of Health demanded access to the company’s intellectual property and began haggling over the cost.

“Essentially the conversation stops and then [the Commonwealth] came back in November … and only got 10 million doses,” Swan said in the radio interview.

A picture of Swan overlayed with parts of that transcript was tweeted two weeks later, and it took off with thousands of retweets and likes. Later that week, independent outlet Michael West Media cited Swan and his anonymous sources in its own story on the topic.

On Friday last week federal Opposition Leader Anthony Albanese brought it up, calling on the Commonwealth to be upfront about the meeting and what went on.

“They need to be transparent about the meeting held last July that we asked about in Parliament, whereby you had a junior burger going along negotiating with Pfizer about the possibility of manufacturing Pfizer here and about access to the Pfizer vaccine here in large quantities,” he said in a press conference.

“That claim by Mr Albanese is false, and Pfizer has already rejected it,” he said.

Swan says he stands by his reporting.

No deal on the table, department says

The meeting in question occurred at a time when Pfizer had just begun phase-three clinical trials for its mRNA vaccine.

Under then-US President Donald Trump’s Operation Warp Speed, the US was pouring billions of dollars into vaccine development and manufacturing while also taking an “America first” stance, preventing the export of US-made vaccines. It meant initial shipments of vaccines for Australia would have to come from Europe.

The first meeting with Pfizer was on July 10 last year, in which senior Department of Health lawyers and representatives, including Lisa Schofield, met with representatives from the pharmaceutical giant for a “high-level” discussion about the company’s progress on the vaccine.

Opposition finance spokeswoman Senator Katy Gallagher asked on Monday night if there was any offer discussed at that meeting. Ms Schofield replied that no numbers or details were put on the table on that occasion.

“They said, ‘this is a vaccine that we are developing’. We said that we were interested to talk to them about potentially purchasing that vaccine, but that was it,” Ms Schofield told the COVID Committee.

Senator Gallagher pressed Ms Schofield: “So any speculation that the government, the department rejected an offer from Pfizer is not true?”

Between that July meeting and November 2020, when a deal was finally struck, Ms Schofield said there were many meetings and specialist briefings between the department and Pfizer, both over the progress of the vaccine trials and for deal negotiations.

Senator Gallagher asked Ms Schofield if there was an offer from Pfizer at any point for any sort of population-based vaccination program that was subsequently rejected by the government.

“I can say that no, that was not put on the table, and would reiterate that Pfizer has indicated publicly that it put the 10 million doses on the table as the offer that was available to Australia,” Ms Schofield said.

“Pfizer came to us with the offer that they could provide 10 million as an early supply, and SITAG felt that was a reasonable position to take up, on the basis of mRNA vaccines [progress] at that stage,” Professor Murphy told the COVID Committee on Monday.

“There was no phase-three clinical trial data, they had never been used in humans.”

A Pfizer spokeswoman pointed to the company’s previous testimony to the committee backing up Professor Murphy’s statement.

“The available doses that we’re able to bring to Australia at this time, and during those discussions, are in the quantity of 10 million,” she told the committee. “That is the quantity that is the basis of the initial arrangement.”

Once phase-three data was published, the expert group recommended increasing the investment, which occurred in February. The group suggested a further increase in April this year when the Australian Technical Advisory Group on Immunisation recommended Pfizer for all adults under the age of 50, increasing the number of doses to 40 million.

“There has been a diversification and flexibility in the vaccine purchase at every stage,” Professor Murphy said.

The Pfizer spokeswoman said, “Our discussions are confidential, however, the supply of vaccine in Australia was developed following consultation with the Australian government and each agreement was based on the availability of doses and earliest schedule that could be provided at that time.”

So, what’s the evidence to the contrary?

Professor Nick Tally, an expert clinician and editor-in-chief of the Medical Journal of Australia said it was easy to be critical of decisions on vaccine procurement in hindsight.

“No one knew what would really work, and it’s clear you’ve got to be careful looking at it with a retrospectoscope,” he said.

On the other hand, he said, it was important to know how well Australia had performed in its negotiations, and transcripts of the meetings with commercial-in-confidence parts redacted could be helpful.

“One would hope negotiations had been done well, and I’d be surprised if they weren’t to be honest, but the view that may not be the case – I think it would be important to have the full facts revealed to have that interpretation tested,” he said.

Professor Tally said unless the anonymous sources came forward, it was difficult to give weight to their comments.

“It’s always really hard to judge the value of anonymous sources because clearly the veracity and ability to check those is impossible if they’re anonymous, so I think it’s important to get them on the record.”

Swan acknowledged the issue with using anonymous sources, but said he was confident his version of events was correct.

“I do stand by it,” he said, adding he believed the Victorian government had their own information about the meeting. “I have spoken to others who have heard through their own contacts.”

He also pointed out it was “entirely possible” the government and Pfizer left the meeting with different perceptions of what had occurred.

“From Pfizer’s perspective, I have been told they think there’s nothing in it for them to sour their commercial relationship with the [federal] government by getting caught up in a political row,” he said.

“One question that needs to be asked is if the government version is accurate, why they claimed to have a four vaccine strategy if Pfizer was not a significant option for the population at large from the get-go? Israel took a pragmatic approach and got Pfizer in large volumes. What influence did price make to the decisions we made and the vaccines we chose? Did we offer Pfizer a premium?”

On Wednesday, James Merlino was asked at a press conference if he had any proof the federal Health Department had missed a chance for a bigger deal with Pfizer earlier on. He said he would be “absolutely delighted” to make the circumstances clear, but cited the federal government’s confirmation of the meeting as his proof.

“There is no doubt at all. Meetings occurred. Negotiations occurred,” he said. “The deal was not sealed, whereas other nations, aggressively pursued Pfizer and got the vaccines that they needed for their community. We did not.”