Prime Minister Scott Morrison and Defence Minister Linda Reynolds have intervened in a move by the head of the Defence Force to strip a decoration from all 3000 special forces troops who served in Afghanistan over alleged war crimes.

Chief of the Defence Force Angus Campbell has come under a fierce backlash from the veterans community and political pressure over his agreement with a recommendation from the Brereton report to ask the Governor-General to revoke the meritorious unit citation for the Special Operations Task Group. 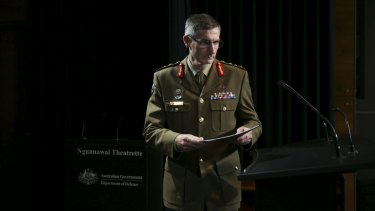 Chief of the Defence Force Angus Campbell has told the government he is further considering whether an award for the Special Forces Task Group should be stripped from 3000 soldiers.Credit:Alex Ellinghausen

Independent senator Jacqui Lambie wants General Campbell to quit, joining other politicians in warning more veterans will take their own lives in the wake of the Brereton report into alleged war crimes by special forces troops in Afghanistan.

But Senator Reynolds said he had assured her on Monday he was yet to move to strip the award.

"Since the CDF made his initial comments on this he has assured me that he's not made a final decision on this issue and he is giving it further consideration, as am I and the Prime Minister," she told radio 6PR. She denied political interference in military decisions, saying she and Mr Morrison had a responsibility to listen to Australians and "to express an opinion to the Chief of the Defence Force".

Mr Morrison also said no decision had been made.

"Governors-General take advice from their prime ministers," he said. "The best thing we can do, is to ensure that we have a fair process, that deals with this both in terms of issues that need to be dealt with within the Defence Force … regarding the conduct of a small number and those who were in positions of command."

A four-year inquiry, led by Justice Paul Brereton for the Inspector-General of the Australian Defence Force, found Special Air Service Regiment soldiers allegedly committed 39 murders in Afghanistan, and 19 serving or former soldiers will face possible prosecution and the stripping of their medals. It also recommended revoking the meritorious unit citation for the Special Operations Task Force.

The move has sparked anger because it would affect all special forces troops who served in Afghanistan, including those who died. A petition to stop the "persecution of 'the many' who served with honour" has received more than 55,000 signatures.

Chief of Army Lieutenant General Burr last week said he supported "the logic of the recommendation in the report, which is if we knew then what we know now, the unit would not have received or been put forward for a meritorious unit citation," he said. 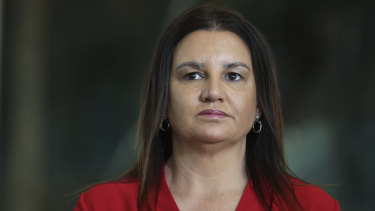 Senator Lambie has slammed the recommendation, and the Defence Force chief for supporting it.

"If General Campbell has not felt the bitch slap from all those millions of Australians out there, I suggest that he pull his head out of his arse," she said.

"If you want to take the citation off 3000 of them when you've only got a handful that should be held responsible for their actions, if they are proven to be guilty, and you make everybody else pay the price for their actions … that is not leadership and Angus Campbell should resign immediately."

Senator Lambie says 11 veterans are known to have killed themselves in November and suicides in the Defence community are 40 per cent higher this year than a year ago. She expects the figures to increase as veterans process the Brereton findings.

"If you don't treat those [SAS] boys over there in the west properly and do the right thing, then what you do is you're going to see that go through the roof very, very quickly," she said.

Labor's Luke Gosling, who represents a large Defence and veteran community, said there was no doubt there had been a surge in suicides since the the allegations came to light.

"What we see, particularly if there's a perception that everyone's been tarred with the same brush and the service of everyone has come into question, is that there's a level of re-traumatisation that happens," he told Sky News.

Families of soldiers who have killed themselves, mental health experts, veteran advocates and politicians from across party lines have published an open letter calling for a royal commission into veteran and defence suicides. They're urging the Senate to reject legislation that sets up a national commissioner for defence and veteran suicide prevention as an alternative.

Senator Lambie has been strongly campaigning against the national commissioner, which she labels a slap in the face.

"We're never going to stop veteran suicides but what we can do is reduce them and the only way we can do that is with full transparency through a royal commission," she said.

Labor's caucus will consider its position on the legislation on Tuesday but is expected to oppose it.