Several months after Demi Lovato’s engagement to—and disengagement from—ex-fiancé Max Ehrich, the “What Other People Say” singer, 28, opened up in a new interview that her most recent breakup has made her think harder about her sexuality.

“When I started getting older, I started realizing how queer I really am,” the two-time Grammy nominee told Glamour. “This past year I was engaged to a man, and when it didn’t work, I was like, ‘This is a huge sign.'”

The “I Love Me” songstress said she originally thought she would be with Max forever. But, once they broke up in September, she said she “felt this sense of relief that I could live my truth.”

The former Disney Channel star then went on to say that she “hooked up” with a woman afterward and thought, “‘I like this a lot more.’ It felt better. It felt right.” Now, Demi said, she feels “too queer” to be with a cisgender man.

“Some of the guys I was hanging out with, when it would come time to be sexual or intimate, I would have this kind of visceral reaction,” she said. “Like, ‘I just don’t want to put my mouth there.’ It wasn’t even based on the person it was with. I just found myself really appreciating the friendships of those people more than the romance, and I didn’t want the romance from anybody of the opposite sex.”

Demi said she’s hesitant to define her sexuality, but she feels comfortable where she’s at. “I know who I am and what I am, but I’m just waiting until a specific timeline to come out to the world as what I am,” she said. “I’m following my healers’ timeline, and I’m using this time to really study and educate myself on my journey and what I’m preparing to do.” Now, Demi said, her heart is “pretty open,” adding, “I’m very much listening to my intuition, and that’s not to say my boundaries or my guard is up. It’s just saying my ears are perked a little higher and my eyes are open a little wider.”

Kudos to Demi for celebrating her sexuality and being so candid about what she’s learned about herself through different relationships over the years. Here’s a look back at Demi’s dating history, from 2008 until today:

Demi dated the former Hannah Montana star a bit in 2008, and Cody Linley shared a hilarious story with Seventeen about just how bad one of their dates was. After he was late to pick her up due to car issues, his car started acting up again. “I was explaining to her, ‘Yeah, my car, I’m sorry, it broke down,’ and as I’m saying that, it starts making a crazy noise again! And I was like, ‘Oh, oh, oh no,’ and she’s like, ‘What’s happening?’ I was like, ‘Nothing, it’s all good.’ She’s like, ‘Are you sure?'” Cody said he had to stop the car to try to figure things out. “Demi was really sweet,” he said. “She held the light for me and put in her car repair advice.”

Details are scarce about this ‘ship, but Demi allegedly dated The Cab’s Alex DeLeon in 2009ish and wrote the song, “Catch Me,” about him.

Demi and Miley Cyrus’ older brother, Metro Station singer Trace Cyrus, went out for a while in 2009. It didn’t last, though—Trace told People that they had trouble physically being in the same place due to their work schedules—and they broke up after a few months.

Demi and Joe Jonas weren’t just Camp Rock co-stars—they actually dated IRL, too. The two even did a joint cover for Teen Vogue in 2010, but broke up not long after. The former couple ended on a good note, though: Demi congratulated Joe on his engagement to Sophie Turner on Instagram in 2017, writing, “HUGE CONGRATS!!!!! Sooooo happy for the both of you!!!!”

Demi and Wilmer Valderrama dated on and off for a looong time, like, from 2010 to 2016. Demi said in her 2017 documentary, Simply Complicated, that Wilmer was a little freaked out by their age difference at first, but they started dating after her 18th birthday. “He was just my rock, my everything,” she said. 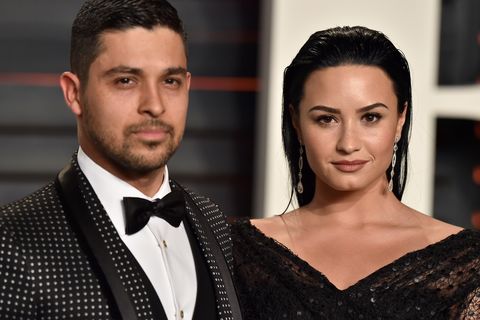 Demi got close with the UFC fighter in 2016, but it didn’t last.

Demi moved on with another UFC fighter, Guilherme “Bomba” Vasconcelos, after her breakup with Luke. The pair first hooked up in the summer of 2016 and then were off and on through May 2017, according to Us Weekly.

A source told Us Weekly in 2018 that Demi was “head over heels” in love with singer Henry Levy, who was also sober. Even so, they broke up after four months of dating.

Demi and former Bachelorette star Mike Johnson went on a few dates in 2019 after his season wrapped. It apparently only lasted for a month.

Demi went public with Instagram model Austin Wilson in November 209, but it only lasted a few months.

Demi’s relationship with the actor moved fast. They quarantined together starting in March 2020 and got engaged July of that year. By September, though, they were done, apparently after Demi realized she didn’t trust him.