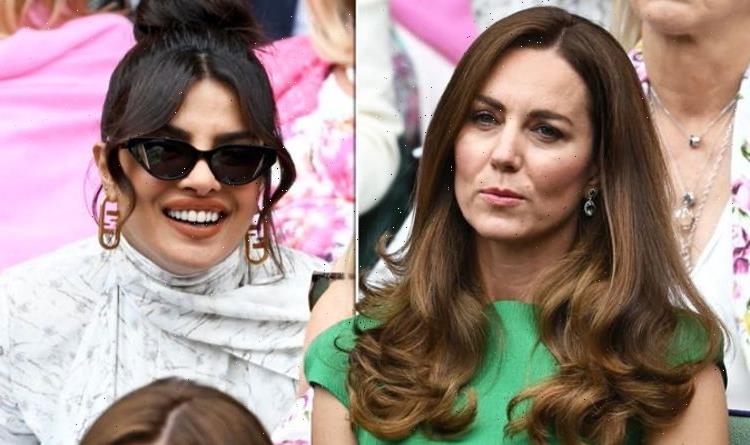 As Kate and William walk into the box, some attendees clap. However, in video footage Priyanka – who starred in 2017’s Baywatch reboot – can be seen not clapping, instead adjusting her hair.

Twitter fans noted the moment. One wrote: “It’s Priyanka Chopra not applauding to the prince’s arrival for me.”

“Priyanka is a true friend,” another said.

She said: “Was this a deliberate snub? In all fairness, I would have to say the footage is not totally conclusive.

“In fact, if we were going to label Priyanka’s body language as a snub you might also have to include other names in that ritual as there are other celebrities also sitting close to Kate who appear to be busy and distracted as she arrives, including Billie Jean King who is actually totally friendly with Kate and who was seen laughing and joking with the Cambridge’s at the same event.”

She suggested the actress did not even see the royals arriving.

“Priyanka appears to be leaning to one side with her head ducked before Kate hones into view and seems to be very busy with her outfit, looking down to adjust some fabric as Kate takes her seat,” Judi said.

“She then looks away to the other side but it is not totally impossible to imagine she didn’t spot the royals in front of her and thought any clapping might have been for the arrival of the umpire or ball-boys!”

DON’T MISS
New rules for shopping in Sainsbury’s, Tesco, Asda and Aldi [COVID]
‘You do not touch those texts!’ Martin Lewis on Royal Mail scam [WARNING]
‘Nothing forced or fake’: Kate Middleton compared to Diana [PICTURES]

A suggestion attendees might not want to gawp at the royal arrivals may explain the perceived snub, Judi said.

She explained: “Some other people sitting nearby do track Kate with their eyes and with wide smiles of appreciation and Priyanka clearly isn’t one of them, but some do also look more distracted and it is just possible that there is a tendency to not stare or gawp at the big names in the box.

“Perhaps Priyanka was remembering her close friend Meghan’s desire for privacy when she was at Wimbledon in previous years and is keen to avoid making Kate feel the same!”

In July 2019, Meghan attended Wimbldeon recently after having her first child Archie.

However, her behaviour shocked some, prompting headlines.

The Duchess was criticised by many for asking the public not to take photos of her at the event, insisting she was there in a “private” capacity.

One such critic was Piers Morgan, who said: “It’s absurd for Ms Markle to demand privacy as she sits in the royal box on a publicly-funded jolly with her mates…”

At the time Judi claimed the request seemed “at odds” with her body language.

She said: “Meghan’s request for privacy at Wimbledon does appear slightly at odds with her body language here, which resembles that of any Hollywood A-lister posing up for the cameras.”

“We’ve seen Meghan’s ‘off duty as a royal’ body language before at her own baby shower in the U.S. and although it was all large shades and head down as she walked past the press there was a strongly theatrical air to her non-verbal displays, as though she was fully enjoying her role as an A-list star.

“Here she sports the huge shades and a hat, but the hat is worn high rather than pulled down in a cut off to shield her face.”

Kate and William attended Wimbldeon together this year, promting praise from fans.

Pictures of the couple laughing together prompting one to claim the pair are “soul mates without a doubt”.

Fans commented on the pictures, One wrote: “Our Duke of Cambridge is the best person to make our Duchess laugh… they know each other for 20 years and are more in love every day!

“They are soulmates without a doubt.”

Another said: “It’s a delight to see them together.”