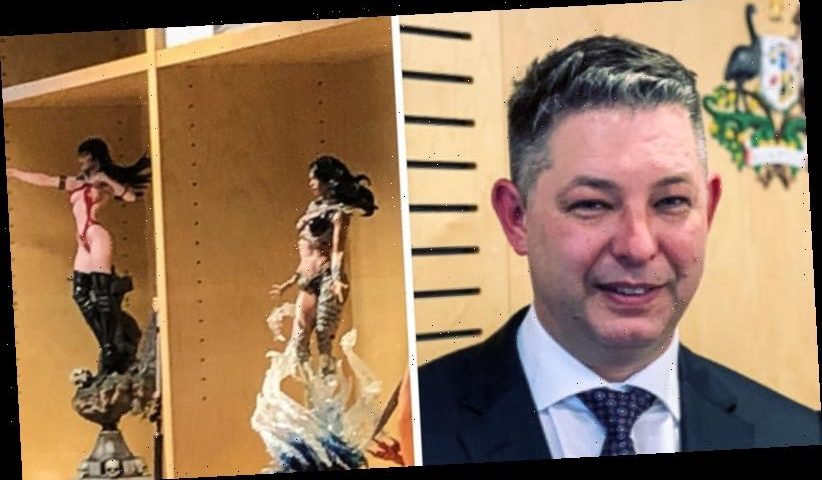 Scantily clad pop-culture figurines in a senior Fair Work Commission official’s office didn’t breach any workplace health and safety laws, Comcare has found, but their display was considered to be a “psychological hazard”. 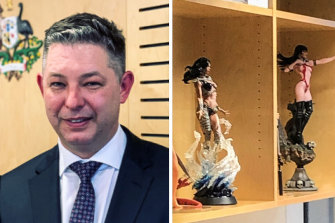 Fair Work Commission deputy president Gerard Boyce and some of the figurines he displayed in his office.

A Comcare spokesman said on Tuesday the authority had examined Mr Boyce’s figurines, which depicted comic-book characters including the Joker, Harley Quinn in fishnets, Captain America and Scarlett Johansson’s body-suited character from Ghost in the Shell, after they were revealed at Senate estimates a year ago.

Mr Boyce was forced to remove a “scantily clad” figurine from his office after staff members raised concerns, the Senate hearing was told. He later installed a life-size cutout of then-US president Donald Trump and fake security cameras, which were then removed.

“We did not identify any contraventions of the Work Health and Safety Act 2011 but considered the display of the figurines to be a psychological hazard,” the Comcare spokesman said.

It recommended members and staff of the Fair Work Commission, which decides unfair dismissal disputes and determines pay and conditions in Australian workplaces, themselves undergo training including on “unacceptable conduct and sexual harassment policies, and available supports”.

NSW Police confirmed on Tuesday it was investigating the alleged firecracker incident.

“On Friday, 19 March 2021, NSW Police received a referral from the Fair Work Commission regarding an alleged incident involving a 47-year-old man in December last year,” a police spokeswoman said. “An investigation is now under way.”

It is illegal to possess or use fireworks in NSW without a licence.

The Comcare spokesman said: “Comcare has an open inquiry in relation to an alleged incident at the FWC’s Sydney offices in December 2020.” 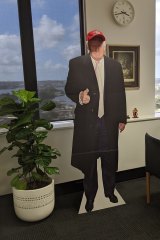 A life-size cut-out of former US President Donald Trump that deputy president Gerard Boyce installed in his office.

A source close to Mr Boyce, who was not authorised to speak on the record, said the commissioner had used some “throw-downs” at a work function last year. There was no risk to anyone and the referrals to Comcare and police were a “waste of time”, the source said.

Mr Boyce’s defenders have previously said his figurines were a hobby and available for anyone to buy at mainstream stores such as EB Games.

“It’s arguable [the] referral is another act of malice,” the source said, suggesting it was politically motivated.

The composition of the Fair Work Commission is highly politicised, with many of the members who preside over disputes coming from union or employer backgrounds.

Mr Boyce, a former barrister, worked for employer groups including the Australian Mines and Metals Association before his appointment by the Coalition government in 2018. Fair Work Commission president Iain Ross was once an ACTU official while general manager Bernadette O’Neill worked for the then Liquor, Hospitality and Miscellaneous Workers Union.

News of Mr Boyce’s referral to police, first reported by The Australian, came as The Australian Financial Review revealed the government was close to appointing former Liberal MP Sophie Mirabella to the commission, citing anonymous sources.

“One of the least conciliatory people to ever come through the Federal Parliament will now be in charge of conciliation for every workplace in the country,” Labor’s industrial relations spokesman, Tony Burke, said.

“A person who described John Howard’s Work Choices as ‘big but fair’ and ‘significant and necessary’ will earn up to $470,000 a year for the next 13 years to oversee Australia’s workplaces,” Mr Burke said.

The office of the acting Industrial Relations Minister referred a request for comment about Mr Boyce to the Fair Work Commission. A Fair Work spokesman declined to comment on the allegations against Mr Boyce or the referral, beyond saying the miniatures were discussed at Senate estimates in March 2020.

In relation to Ms Mirabella, a spokesman for acting Industrial Relations Minister Michaelia Cash said “the government doesn’t comment on speculation about appointments”.

“Any appointments will be considered and announced in the usual way.”

Commission members cannot speak to the media because of their roles.