From Australia’s biggest galleries to our smallest souvenir shops, Aboriginal and Torres Strait Islander arts and crafts is a $250 million business.

But, according to a new draft report from the Productivity Commission, Aboriginal and Torres Strait Islander artists don’t see the vast majority of that money. In fact, two in three “Indigenous-style” souvenirs are “inauthentic, with no connection to Aboriginal and Torres Strait Islander people”. And the commission is now calling for new legislation and a mandatory labelling system to help change that. 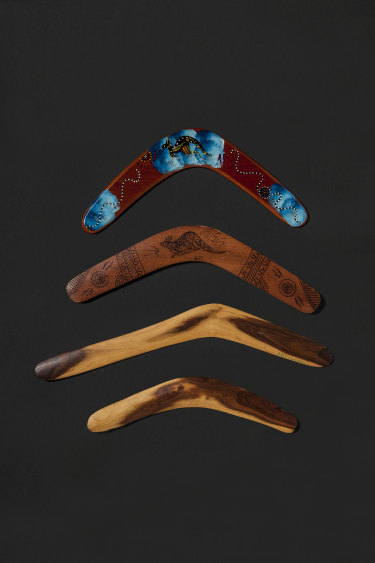 The top two boomerangs are of the fake type commonly sold in souvenir stores around Australia. The bottom two are genuine boomerangs, by Rolley Mintuma at Maruku Arts, NT.Credit:Jennifer Soo

After widespread consultation, the government’s research and advisory body is recommending Australia “formally recognise the interests of Aboriginal and Torres Strait Islander communities or groups in their traditional cultural assets”.

Proposed legislation would give traditional owners the right to:

“[This] has been called for for decades,” commissioner Romlie Mokak, a Djugun man and member of the Yawuru people, tells The Age and The Sydney Morning Herald.

“What we’re saying is that traditional owners [should have] a say about their traditional knowledges and the expressions of those knowledges.

“The existing laws are insufficient. They’re patchy and piecemeal.”

Currently, there isn’t much to stop non-Indigenous people (here or overseas) from creating and selling works that draw from Aboriginal and Torres Strait Islander cultures.

Copyright law only applies to an individual, not a broader community. And consumer law, Mokak says, “focuses on consumer protection … rather than the protection of Indigenous artists’ work”.

In a landmark 2019 decision, for example, the Federal Court found that a company selling “Aboriginal” art had misled its customers because the work was really made in Indonesia. The company went into liquidation after being fined $2.3 million.

But, under the commission’s proposed legislative framework, Aboriginal artists or communities could take direct legal action against such groups, and seek payment.

“We see it as something akin to a warning label,” Mokak says. “[A label] would give information to the consumer to then make the decision for themselves.

“Right now you can go into any number of shops, and it’s very hard to determine what’s authentic and what’s not … A warning label for inauthentic works puts the onus on the producer, and is much more cost-effective and administratively less burdensome [than a broader ban].”

Organisations like the Arts Law Centre of Australia have previously called for an outright ban but others, like the Aboriginal Art Association of Australia, have called that “unrealistic”.

Speaking generally on the issue of better protection for Indigenous art because she was yet to see the commission’s draft report, Gabrielle Sullivan, CEO of the Indigenous Art Code (a voluntary industry code of conduct) says it’s important for any measure to be practical and easy for Indigenous creators and their businesses.

“We’re really mindful of anything being onerous on the artists which such schemes are intended to benefit,” she says. 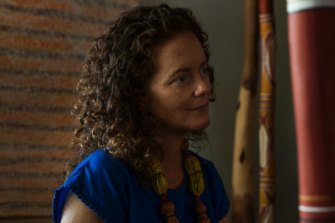 The Indigenous Art Code, she adds, is very in favour of “standalone Indigenous Cultural Intellectual Property laws in this country … and at the very least, as an interim measure, an amendment to the Australian Consumer Law, so it’s illegal for people to be selling products that have the look and feel of Aboriginal art while having zero connection to Aboriginal and Torres Strait Islander people.”

“As lots of artists say, it’s a no-brainer: you should be able to [take action] against that.

“[We hope] the artists and communities who have continuously raised their concerns about fake art (long before the Indigenous Art Code did) are heard.”

The Productivity Commission is accepting feedback before submitting its final report in November.

In need of some good news? The Greater Good newsletter delivers stories to your inbox to brighten your outlook. Sign up here.