Free “gold standard” coronavirus tests could soon be a thing of the past if states don’t pick up the tab as the federal government reviews its funding of the screening for next year.

Several states and territories, including Queensland and Tasmania, have made pre-departure PCR tests a condition of travel for those wanting to see family and friends as borders reopen across the country ahead of the holiday season. 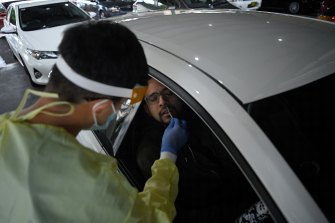 The federal government is reviewing its funding of PCR tests as rapid antigen tests become more widely available and the country moves away from suppressing the virus.Credit:Kate Geraghty

But the country is moving away from trying to suppress COVID-19 now there is broad vaccination coverage. The national rate for fully vaccinated people aged 16 and over surpassed 80 per cent on Saturday and the first-dose rate is nearing 90 per cent.

It pays private pathology companies $85 a test in a deal set to expire on December 31, while public laboratories receive half as much through Medicare. Private firms have been lobbying the federal government to continue the $85 rebate for another 18 months, while Public Pathology Australia, representing public laboratories, last week said it would be unfair to continue such a large rebate.

A federal Department of Health spokeswoman said on Tuesday the government was “currently considering appropriate Medicare arrangements for COVID-19 pathology testing in 2022”.

But she said it continued to support the use of PCR tests for diagnosis.

“Australia’s COVID testing has been recognised as one of the most accurate systems in the world,” she said. “This in turn has allowed us to have a strong contract-tracing system and to have one of the lowest case rates and death rates in the world.”

The spokeswoman said the use of PCR tests was guided by two expert medical panels, the Communicable Diseases Network Australia and the Australian Health Protection Principal Committee (AHPPC), both of which strongly advised the use of PCR as the preferred testing technology during the initial “suppression” phase.

Most states and territories are now in the “transition phase” of the national reopening plan while Victoria and NSW are in the “consolidation” phase, allowing vaccinated Australians to return to the country without quarantine and allowing unrestricted travel of vaccinated residents between the states. Western Australia, Queensland and Tasmania’s reopening plans will require interstate visitors to return a negative PCR test in the lead-up to their trip.

The AHPPC is working on national guidelines for the use of rapid antigen tests, which have been available for personal use and purchase in supermarkets and pharmacies since November 1 as a screening tool. These tests will also be used in NSW and Victoria to help manage the COVID-19 risk in schools.