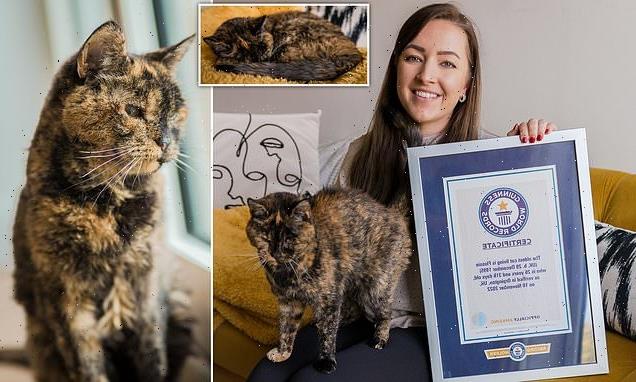 Hunting birds might be a distant memory and her fur might not be as fluffy as it once was – but with just a few weeks to go before her 27th birthday, Flossie has a lot to celebrate.

Guinness World Records has announced the moggy – who is over 120 in cat years – is officially the world’s oldest feline.

Earlier this year, the adorable pet was rehomed for the third time in her life when Vicki Green, 27, from Orpington, took her in.

The proud pet owner, who works as an Executive Assistant, had lost her cat Honeybun at the age of 21 and she turned to her local Cats Protection for help filling the feline-shaped hole in her life.

Vicki explained: ‘I knew from the start that Flossie was a special cat, but I didn’t imagine I’d be sharing my home with a Guinness World Records title holder. 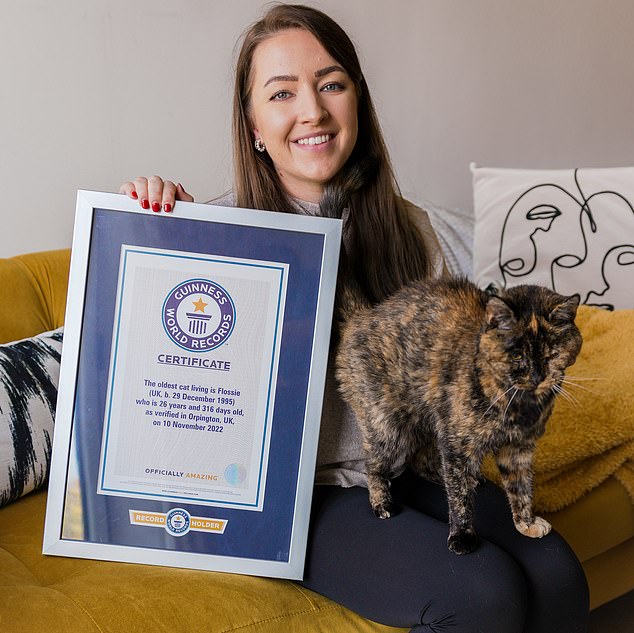 Vicki Green rehomed Flossie earlier this year. The feline was born on 29 December 1995 and is over 120 in cat years 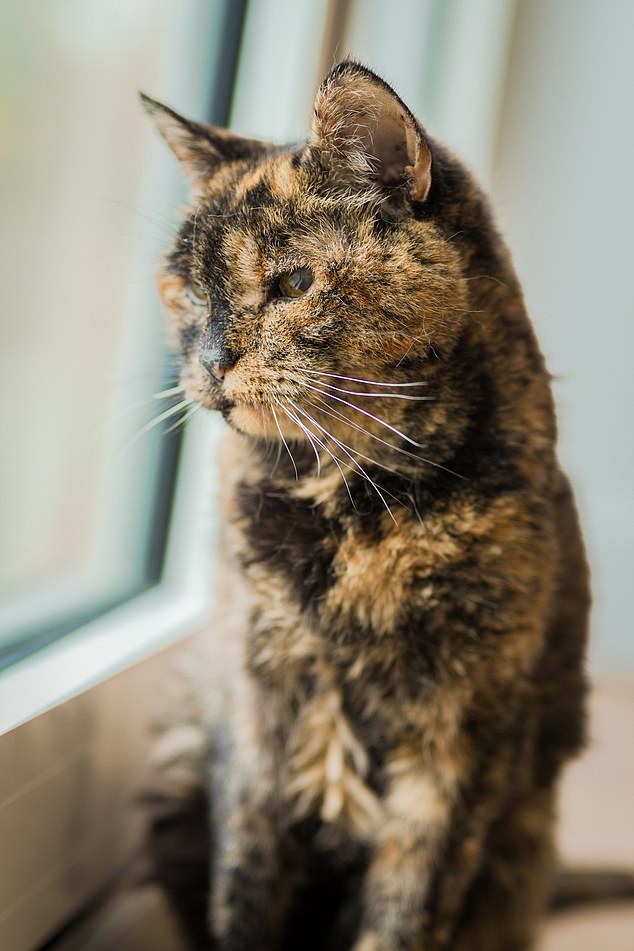 Flossie spent the majority of her life living in the same family. She was discovered as a kitten Merseyside hospital in late 1995 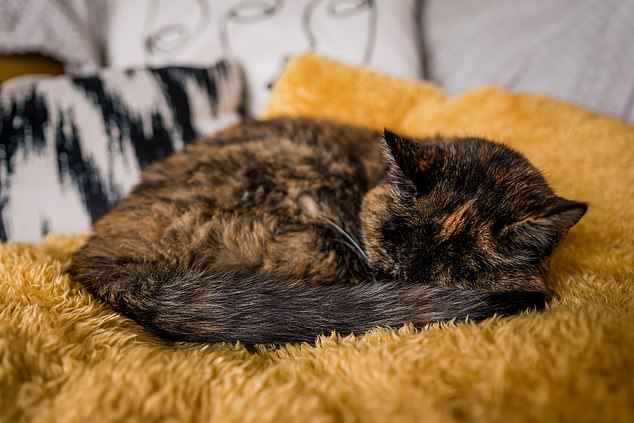 ‘She’s so affectionate, playful and sweet, especially when you remember how old she is. I’m immensely proud that Cats Protection matched me with such an amazing cat.

‘She’s deaf and has failing eyesight but none of that seems to bother her. She’s completely with it, loves affection and has a very good appetite.

‘She never turns her nose up at the chance of a good meal, except when she’s snuggled on her favourite yellow blanket.’

Flossie spent the majority of her life in the same family after being discovered living in a colony of cats near Merseyside hospital in late 1995. 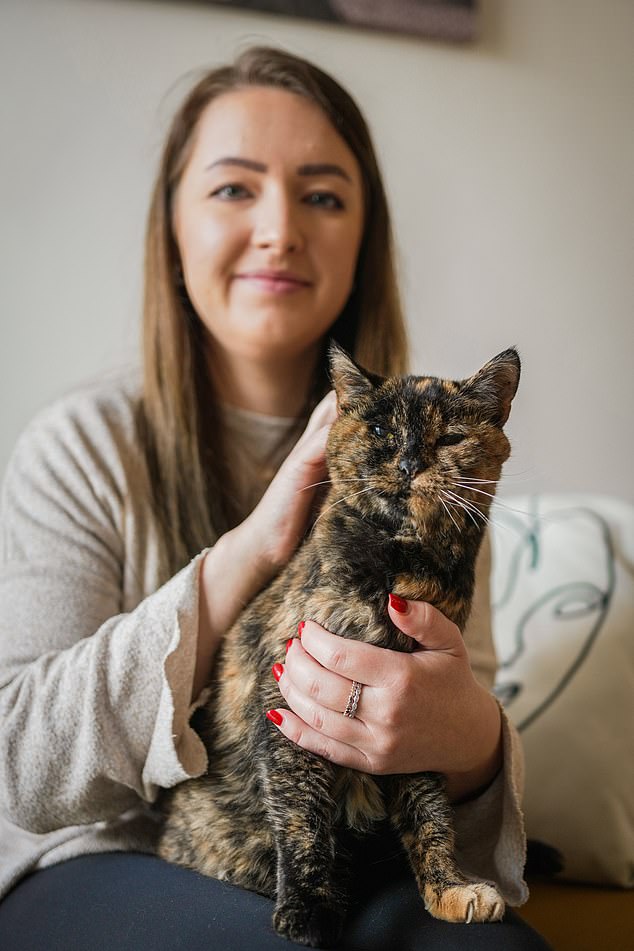 Vicki had previously had a cat called Honeybun who lived to the age of 21. She turned to Cats Protection for help finding a new pet earlier this year 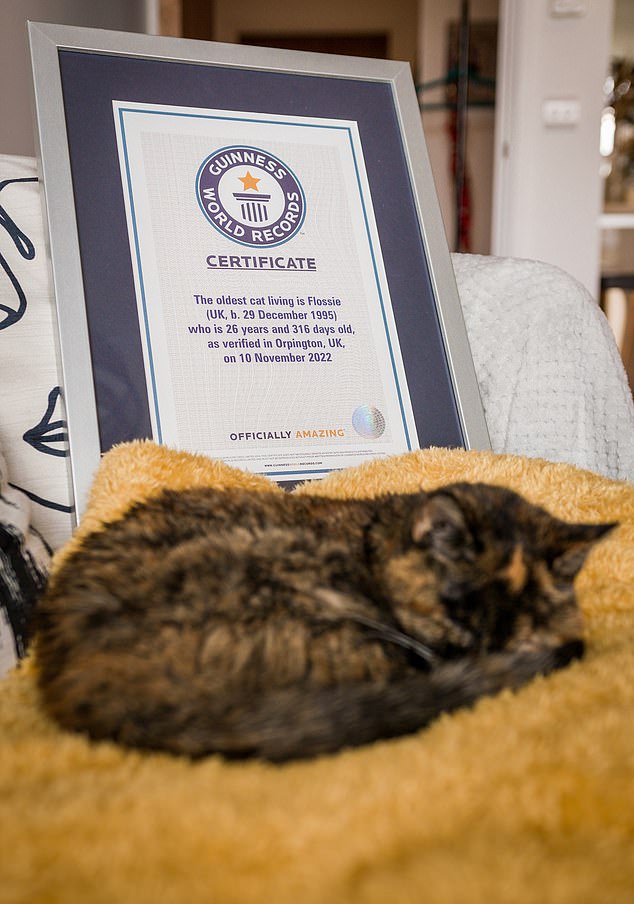 Flossie pictured sleeping next to her Guinness World Record certificate.  Editor Craig Glenday said: ‘We’re happy to see Flossie settled and enjoying all the home comforts she deserves in her later life. A huge congratulations to Flossie, a highly deserving record-breaker.’

Key events that happened in 1995 – the year Flossie was born:

January 17 – earthquake in Kobe, Japan, causes over $200bn of damage

May 20 – Everton beat Manchester United in the FA Cup final

August 24 – Windows 95 is released by Microsoft

October 3 – OJ Simpson was found not guilty of murder

She spent the first 10 years of her life living with one of the hospital workers until they sadly passed away.

Flossie was then taken in by their sister and lived with her for a further 14 years before her death.

At the age of 24, Flossie moved in with the woman’s son – but after a change in his living circumstances, he made the difficult decision to rehome her through Cats Protection’s Tunbridge Wells, Crowborough and District Branch.

Naomi Rosling, Co-ordinator at the Cats Protection branch, said: ‘It wasn’t an easy decision. He’d promised to take care of Flossie’s needs but, in ways that matter most, that is exactly what he has done.

‘He sought our help when it was in Flossie’s best interests. Responsible cat ownership is when someone thinks about an animal’s needs above their own feelings.

‘We were flabbergasted when vet records showed Flossie to be nearly 27 years old. She’s the oldest cat I’ve ever met; at least 120 in human years.

‘If I’m in such good shape when I’m her age, with someone who does what’s best for me when I need it most, I shall be a very happy lady!’

Although Flossie was initially confused about her new surroundings, Vicki says she’s settled in extremely well.

Her new owner said: ‘She was loud for the first few nights, because she can’t see in the dark and was a bit confused in her new surroundings, but she sleeps through the night now, snuggled on the bed with me.

‘Our new life together already feels like home for Flossie, which makes me so happy. Older cats can need particular care and being the oldest living cat, Flossie isn’t any different.

‘She sometimes misses her litter box or needs help grooming herself, but I can help with all of that. We’re in this together.

‘I’ve always wanted to give older cats a comfortable later life. All they really want is a comfy bed in a warm loving home and they give so much love in return.

‘Cats Protection has a lot of mature cats in need of homes and they don’t need to be high maintenance. All they really want is a cuddle and somewhere warm to sleep. I’m glad that Cats Protection matched me with Flossie; adopting her has been rewarding for us both.’

Craig Glenday, Editor in Chief at Guinness World Records, said: ‘We were so excited to hear about the lovely Flossie and celebrate her long life – it’s not every day you come across a cat who has been around since the mid-nineties. This is the human equivalent of over 120 years old, which would put her on par with Jeanne Calment, the French supercentenarian who lived to 122 years 164 days and holds the record for the oldest person ever.

‘We’re happy to see Flossie settled and enjoying all the home comforts she deserves in her later life. A huge congratulations to Flossie, a highly deserving record-breaker.’