Playwright Tom Wells said he set out to write a play "that felt a bit like a folk song". What he ended up with is more LA pop anthem than East Yorkshire ballad: you know those wretched songs where the verse, chorus and bridge are hammered together despite the parts not quite fitting, and if you listen to the lyrics you will sink without a trace in sentimental quicksand. 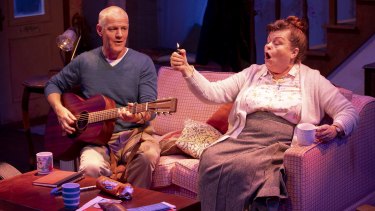 It's not that the Briton can't write. On the contrary, Folk is crammed with flashes of humour, finely observed nuances of character and moments of poignant interaction. The problem is it's like watching a marionette and being able to see the strings too clearly: there's nothing wrong with having your emotions manipulated, you just don't want to see the narrative cogs and widgets so fully illuminated while it is happening.

Winnie is a Yorkshire-domiciled Irish nun whose big, bold heart of gold is now on the blink. The regular fags may have played a part, or it might all just be part of God's grand plan. She has grown to cherish her weekly Guinness-fuelled sessions with Stephen, an acceptable singer/guitarist and so-so tin whistler, with whom she sings traditional songs at her place.

When they are rudely interrupted by Kayleigh​ lobbing a brick through the window, Winnie's Christianity wells up in a fountain of forgiveness, baffling Stephen. Thereafter the box-ticking and treacle-coating is turned to maximum.

This is so frustrating, when some of the writing is very fine, notably in approximating the expression of feelings by the relatively inarticulate Kayleigh​, and in the inherent theme of celebrating the uniquely communal power of music. Furthermore, director Terence O'Connell​ has cast the play well.

Genevieve Lemon can do a big heart blindfolded, and she makes Winnie's generous spirit convincing enough, while delivering assorted saint-related wisecracks with lip-smacking relish. Libby Asciak​, who is probably deep into her 20s, offers some exceptional moments in realising a problem-plagued – more box-ticking, please – 15-year-old girl, via twisting, writhing limbs.

Gerard Carroll is not quite so persuasive as Stephen, but then the character is comparatively underwritten. Meanwhile Hugh O'Connor's​ set – as old-fashioned as a red telephone box – cleverly and charmingly transforms the Ensemble's stage. But surely there were better plays on which to expend the time and talent.