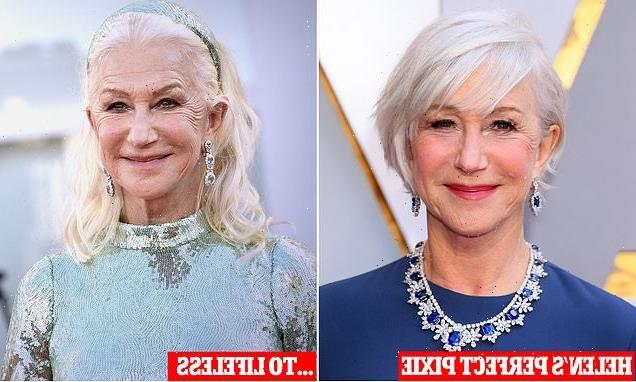 The long and short of how to be gloriously grey: For once, Helen Mirren’s hair-do didn’t dazzle. LIZ JONES – who admits getting it wrong so often – reveals her hard-won advice… and a top hair stylist gives his verdict on the stars with steel

Honestly, I love Helen Mirren, I do. She’s the only Hollywood star I’ve ever interviewed who sat in full sun, sans make-up, for our chat.

She never puts a foot wrong with her film choices, sartorial choices and, most important, her usual choice at the hair salon.

That gamine, grey crop perfectly frames her heart-shaped face which, at the age of 76, is free of artifice, and frames a smile that reaches her lively blue eyes (Hollywood stars usually smile only with their teeth).

So. Never a toe wrong. Until, that is, she turned up for the Venice Film Festival last weekend.

I thought at first the figure in the boat was Vivienne Westwood, so mad was her hair, a cloud of snow-white candy floss. 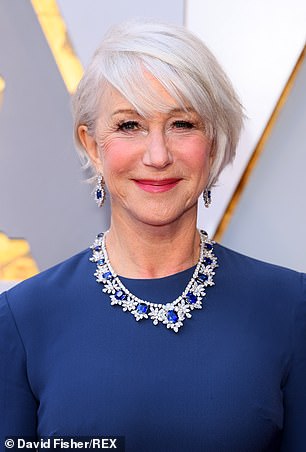 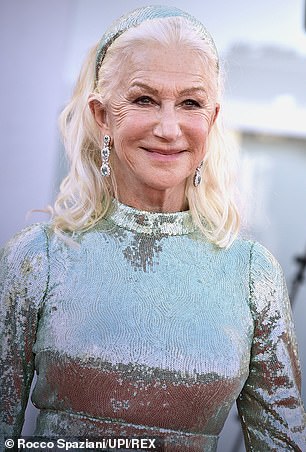 Helen’s perfect pixie to lifeless: This grey colour (left) is so clean, with no peppery flecks, that I believe Ms Mirren has had her hair bleached and toned to give it a matte finish. It’s such a striking look, and that’s down not just to the cut but the colour. In a dark colour, the short hair would look bland and a bit lifeless. But, oh dear, her new style (right) accentuates her fine, dry hair. It’s bedraggled and very ageing. I suspect this must be her natural colour, and it’s dull. It doesn’t help that there’s no warmth in her skin tone, which adds to the ageing effect

Later, her hair was tied back in a severe scrape, and at the opening ceremony just days ago, she sported another unfortunate effort — hair pulled back again, this time with an Alice band, and the rest left to straggle inelegantly towards her shoulders.

Is the new style for an upcoming role, perhaps (Mrs Rochester springs to mind)?

Or has some wretched hairdresser crept into her soul, whispering in her ear the lies we’ve all been told: ‘A scrape shows off your cheek bones’ or ‘Why shouldn’t you go long? An Alice band can be worn at any age!’

I’m no stranger to The Horror of Having Hair over 60. I have resisted going grey, and given I have very long hair, I’d be dead before the colour grew out.

I am cowed by the Tyranny of the Badger Stripe, so am forced to have my hair dyed in a salon every fortnight.

There is a fleeting nanosecond when it all looks fine, but by Week Two I have a sliver of silver needing to be hidden under a hat until I can sit in that chair again and cold, black gloop painted on my roots.

Lockdown, of course, meant hairdressers were closed, so I had to go to Boots to buy one of those dreadful boxes of home dye that, despite promises of smelling lovely and not dripping down your face, manages to dye furniture, work tops and any pet who sniffs too close.

And so I performed my second at-home dye job in the bath, not realising, as I rinsed off the Diamond Black (Olia by Garnier) and sat in the murky soup, that I would emerge with a new darker skin colour, too. 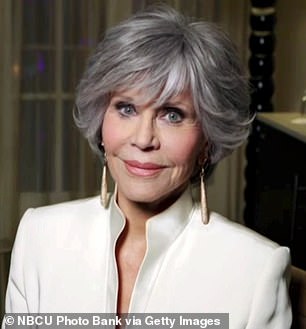 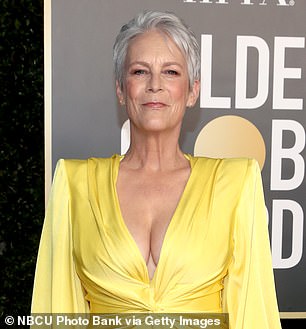 What a classy look for Hollywood legend Jane (left), 83. She has so much pepper in her hair. And 63-year-old Ms Lee Curtis’s hair (right) has got real pizazz

A few years ago, tired of being almost bankrupted by my bi-weekly salon addiction, I tried to go grey gracefully, prompted by two seismic events.

The first was when I was sent to New York to interview Patricia Field, the legendary costume designer for Sex And The City.

Now 79, she was then in her early 70s, and conducted the entire interview sitting in a chair in her studio while her hairdresser painted bright red dye on her scalp, which proceeded to drip down her face and on to her clothes, so she looked as though she’d been murdered.

Dyeing one’s hair suddenly seemed to me undignified, and impossibly sad. The second wake-up call came when I was out walking my dogs, and a jogger behind me wolf whistled.

It was only when he overtook me, and twisted round to see my face, that he tripped over in dismay. I was fooling no one.

And so, shaken, I went to see colourist Louise Galvin (daughter of the legendary Daniel), who stripped my crispy hair of some of its black using a secret, chemical-free formula, and gave me very pale, caramel highlights, concentrating around my face.

The idea was that as the tenacious, wiry grey came through, it would be less stripey.

But I soon went Back to Black, mainly because someone tapped me on the shoulder at an event and was surprised to discover I was not, in fact, Mary Beard. I wasn’t ready to give in — yet.

But I’ve observed enough of those my age, who have made the brave step, to grasp the grey rules for when I am ready. 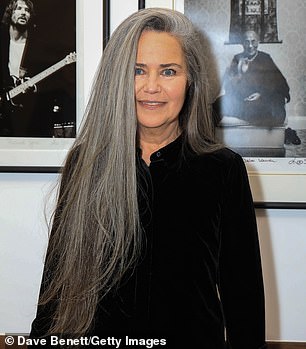 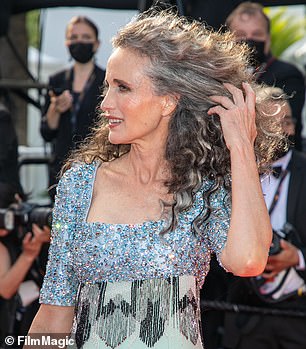 The way the soft colours frame Ms Stark’s face (left) looks so youthful. But it was brave of Ms MacDowell (right), 63, to grow out the coloured ends. Does she realise it could take two years?

Try to keep it shortish: while a sleek, grey bob can look glamorous, and the Queen, of course, looks wonderful with her symmetrical, immovable pin curls, very long grey hair easily strays into Miss Havisham territory.

Of course, there are exceptions: some women can pull off long grey hair: Vogue’s Sarah Harris, and the late, great former editor of Italian Vogue, Franca Sozzani, who kept her flowing pre-Raphaelite locks till the end.

The common denominator here is the word ‘Vogue’, i.e. very expensively and professionally kempt. Long, grey hair works only if it’s sleek, and with no hint of yellow. Never straggly, and best teamed with immaculate make-up and wardrobe.

Even Mary Beard herself has smartened up of late, and recently shared a photo of herself and her newly flat-ironed, hair, with a soft side parting.

Courtesy of crimper to the stars, Gary Ingham, she says it made her ‘feel new’.

By Nick Peters for the Daily Mail

Forget any idea that going grey is the same as giving up. Women with great grey hair don’t get there by accident. It takes huge effort.

I know. As Artistic Director at Daniel Galvin’s legendary Marylebone salon in Central London, I’ve spent much of my life helping women through the whole transition process.

I even guided Sir Paul McCartney to embrace his grey. It can be a rollercoaster journey — but done right, the results can be spectacular. The big thing to understand about grey hair is that it’s going to be more unruly than either hair that’s still got its natural colour, or hair that’s been coloured. 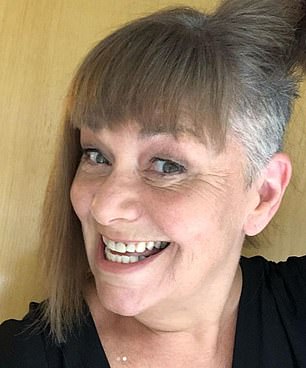 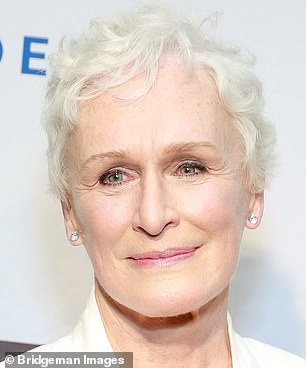 I haven’t seen this look on Ms French (left), 63, before, it’s a quirky way to have fun. And what a natural, elegant look from Fatal Attraction star Glenn (right), 74

That’s simply because it has lost its pigment due to ageing, and without that, hair becomes drier and frizzier.

So you’ve got to think about getting a sharp style and keeping your hair in tip-top condition.

You can’t get away with long, wild hair when it’s grey. You risk looking like a mad scarecrow woman.

Even if you have spent your pre-grey life with delightfully easy-to-manage, straight hair, those greys will have a whole different texture and mean you’ll need to rethink how you style your locks.

Grey hair is also inclined to look dull and lifeless, so it’s vital that you feed it as much moisture as possible to give it life and shine.

I recommend my clients use a conditioning mask once a week. Even left on for five minutes in the shower, the steam will open the cuticles and let the mask get into the hair shaft.

I also suggest using a few drops of serum before every blow dry to keep the hair moisturised. 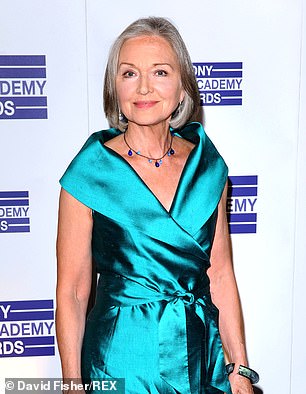 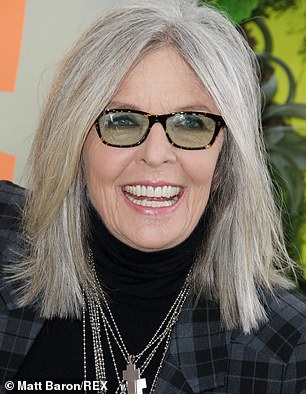 The grey works well on former newsreader Anna (left), 77, with this sharp cut, and I suspect Ms Keaton (right), 75, has highlighted her natural salt-and-pepper hue with a creamy tone

If you hammer coloured hair with curling tongs and straightening irons, it will simply go a bit lighter in colour.

But grey hair is less forgiving. You risk getting a yellow tinge from the heat and making it even coarser. It’s really important to style it slowly and gently, taking time over your blow dry.

When it comes to cut, be guided by the shape of your face and the quality of your hair. If yours is fine or thin — which is more likely as we age — you will probably want to take it shorter. But don’t feel you have to lop it all off the second you spot the first grey strand.

That said, if you are starting the journey to grey from hair that’s been dyed to cover it, I would recommend first cutting your hair as short as you can bear. It will speed up the whole transition process.

To make it less painful, you can use lowlights or highlights to even out the contrast and help the new grey blend in.

With the right treatment, well-conditioned grey hair can look absolutely stunning — whatever your age.