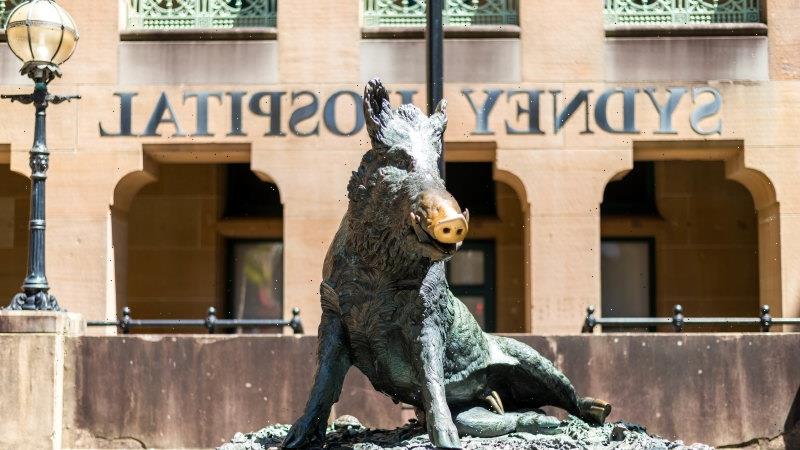 Statues. If you’ve never heard of them, they’re exactly like real people, but take a closer look, and in fact, they’re not real people at all. Just different metals and compounds dressing up as us to make themselves feel better. Statues are in essence, quite limited, as they can neither walk nor talk. As to their origins, I don’t know exactly when the first statute was born or who gave birth to it, but it would have been bloody terrifying.

Nevertheless, here in Australia, we froth over a good statue. Ages ago, men would pop them on street corners, let them grow mouldy in gardens, and force them to look down on us from on top of our oldest buildings. Back in the day, if your best mate did something you thought was cool, like mass murder or cultural genocide, you’d gift him with a statue of himself to rest in the middle of a highway intersection or outside an airport. They just did romance better back then, didn’t they? 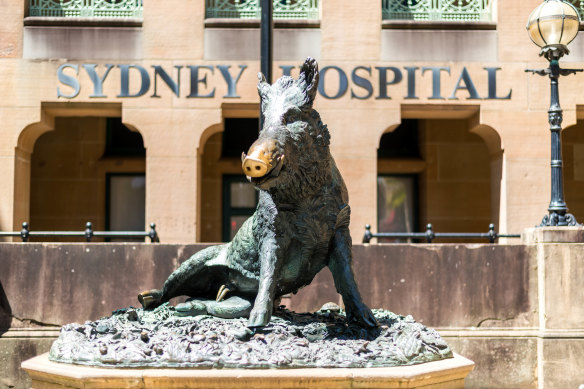 Us Australians can’t help but touch them and stare at them, out of awe, and also to make sure they’re not one of those spray-painted street performers, those sneaky fellas.

Whatever the case, there is a kind of joy that comes from having statues in our towns. There’s the thrill of walking up to a fountain and bouncing a coin off the bare butt of these god-like effigies or utilising them as a temporary pissoir late at night.

Yes, they are important monuments. Created to make society gaze up and marvel at the contributions of men long gone, and the birds who love to defecate on them. We also consider the life of those the statue now replaced, we look into those shiny faces and think, “wow, do you think it stung that horse when they cast it in iron or was it dead already when they shoved it in there?”

If you’re into them as much as I am, you’ll come to discover that statues of women in Australia don’t readily spring to mind. I’ve had a fascination for statues since I was a little girl, but the sad reality was, for us gang of young women, playing “statues” was probably the closest we were going to get to being one. In fact, right now in Australia, there are more erected statues of farmyard animals than there are statues of women. For once, I’m dead serious. In Melbourne and Sydney, for example, less than 6 per cent of the cities’ statues depict figures of women. Kind of feels like they’re being undervalued, hey? But why should I try and convince you, when a Sydney man on his way to work literally passes more hogs, tortoises, snakes, frogs, snails, lizards, and crabs on pedestals than he does an Australian female icon?

So hypothetically, if humans on earth suddenly ceased to exist, the aliens who landed here after would be quite reasonable in assuming Australia was a glorious island where men ruled the world alongside their gorgeous hog brides. Women wouldn’t have figured into the aliens’ notion of how modern Australian life really was, and fair enough!

If monuments are actually important to the fabric of society (and not just things drunk men and bin chickens piss on) the lack of women present compared to thousands of other statues kind of gives me the impression that they might not be as worthy of attention as that of the man or the beast. This is bloody ridiculous, and if you’ve ever seen an episode of Love Island Australia you know when women lack attention they get very, very cross about it.

I first became aware of this haunting lack of lady statues while doing what every gal in her 20s does on the weekend; exploring the national archive online. In particular, I was trawling through the list of thousands of monuments in Australia dedicated to World War Two. Yet, I couldn’t find any statues of Australian women here. I found a statue dedicated to the dogs who served, one of a horse, and a sheep, yet I was really struggling to find a statue of even one of the 66,000 women who enlisted.

The one I did find representing society’s gratitude to them, in retrospect, I wish I hadn’t. To be honest, I’d have been happier to discover a pair of tits made of paper-mâché. The particularly sobering memorial I found was dedicated to women who fought and died in World War Two lives in Angaston, South Australia. The quiet country town really came through for feminism when they erected the very real, WW2 Women’s Memorial Rest Room. That’s right. Women of WW2, behold, your magnificent toilet… happy now? 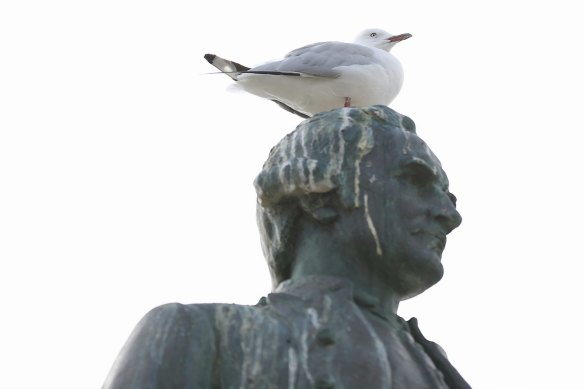 A seagull surveys the view from Cook’s statue in St Kilda.Credit:Alex Ellinghausen

The Foundation stone inside the main entrance of the smelly public toilet reads “A tribute to the women who served” and if that’s not a sour enough taste for you, take a deep breath, cause once inside the framed plaque on the dunny wall declares: “This building is dedicated to the magnificent women who, in uniform and at home, served humanity during the War, 1939-1945….Please treat it with the care and respect due, that it may long be preserved to fulfill its purpose.” That purpose of course, was being a safe haven for horny teenagers and bachelorettes to vomit up their mimosa brunch in peace. I had to wonder whether those women who fought and sacrificed their lives knew it was going to be immortalised in the form of a public thunderbox.

In 2023, there has to be more room in the world for big, bronzed women. Australian sheilas, heroines that need to be celebrated. For instance, I reckon we put a massive iron sculpture of the hardest working woman on Australian TV, Sophie Monk, somewhere along the Gold Coast promenade. While we’re at it, we could pop up a huge Penny Wong doing a shoey from a political enemy’s boot outside Parliament House, and who of us could deny that Abbie Chatfield would be a clear tourist trap if a cast iron version of her was displayed over the Anzac bridge in Sydney?

If those ideas seem less than tasteful to you, or maybe a little misguided, dear reader, I beg you to get a grip and remember the bunch of men who thought that a statue of a hog with its member hanging out was more crucial to society than one of a woman.

To read more from Spectrum, visit our page here.