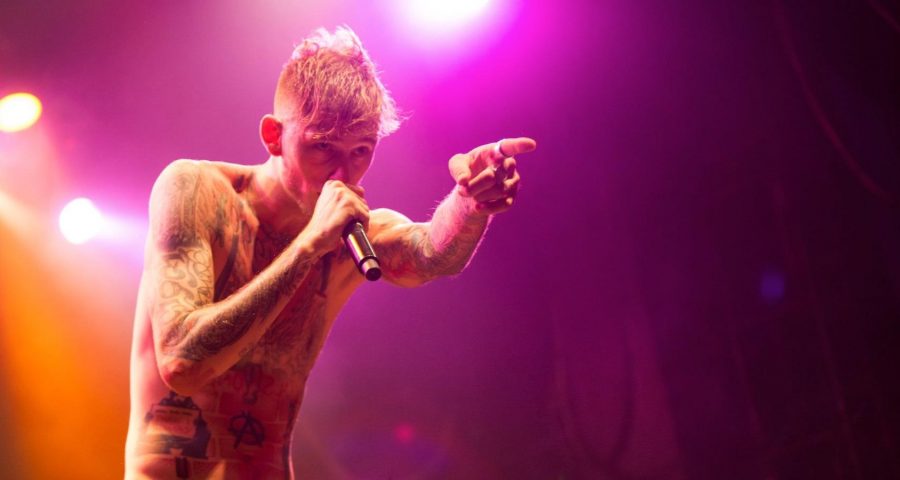 Logan Paul began his career making Vines and YouTube videos in his backyard and moved to California once he gained fame and popularity in the online community. His shift to California helped him land movie roles, and he collaborated with Hollywood stars for his projects. After several years of living his best life in LA, Paul decided to begin a new chapter of his life and move to Puerto Rico. He put his primary Encino home on sale before leaving, and a year later, it was purchased by Machine Gun Kelly for $7.5 million. MGK, who has decided to settle down in California with Megan Fox, bought his first LA property for his family.

The estate that features stunning amenities and custom features added by Logan Paul, the Encino home is the perfect combination of rustic and contemporary. With a breathtaking interior and large backyard, let’s look at the beautiful Encino home MGK purchased from Logan Paul.

The property was initially designed by a former member of the United States Senate, Robert Byrd, in the 1970s and developed by Maxim Cherniavsky when he lived there with his family. The estate has been expanded and overhauled beyond recognition since the first home. Located in the San Fernando Valley region, Machine Gun Kelly’s newest home sits in one of Los Angeles’ poshest neighborhoods called, Encino. As mentioned by Metro, the secluded street is lined with trees before anybody can glimpse the gunmetal gray house that spans a one-acre area.

RELATED: Inside The Marvelous $19 Million Hidden Hills Home Where Superstars, The Weeknd And Madonna, Have Lived

Logan Paul purchased the property in October 2017 for $6.6 million after moving to Los Angeles and called it the Maverick House, which is also the name of his merchandise brand. Matt and Josh Altman from Douglas Elliman had the listing and put the house on sale for $9 million in January 2021; however, the final price was negotiated to $7.5 million, as stated by Loud Wire. Paul customized the home according to his lifestyle and made multiple changes indoors and outdoors.

The primary residence has open and airy rooms with vaulted ceilings and expansive glass doors. The open concept living room has a conversation pit, armchairs, and a small wet bar next to the formal dining area. Logan Paul had installed a basketball hoop in the living room during the quarantine to pass his time. The gourmet kitchen is a chef’s dream and features top-of-the-line appliances with a large marble island. According to The Sun, the modern farmhouse-style home boasts four fireplaces, an office, a screening room, and multiple wine cellars.

The Encino house has seven bedrooms and bathrooms. Besides, it is equipped with eight powder rooms. The Master Suite overlooks the backyard and offers a stunning view of the lush garden and pool. The rustic bedroom has a walk-in closet and a spa-style bathroom. Paul had also added a custom game room that certified the home as a frat house for him and his friends. Facing the driveway is a six-car garage where MGK can park his stellar car collection with a Mercedes, Rolls-Royce, and a Lamborghini. While the estate is beautiful inside, the backyard has always been Logan Paul’s favorite place on the estate.

Expansive Space For The Family

While remodeling the home, Logan Paul installed a high-end tech security system and a new perimeter fencing after several stalkers and trespassers had managed to enter the property without entrance access. The gates now have full-time security guards stationed to guard the residents, as stated by Dirt. The oversized pool occupies the main space in the backyard and has a grassy lawn that reaches every corner of the land. The detached guesthouse that featured one bedroom and one bathroom is converted into a gym, and next to it is a boxing ring where Paul practiced for his matches. The backyard is completed with comfortable sun loungers by the pool, armchairs, and a grotto backyard kitchen for meals during the summer.

Logan Paul sold his Maverick home to MGK as he moved to Puerto Rico to concentrate on his boxing career and manage his finances. The YouTuber owns another property in California, a ranch in the San Jacinto Mountains. This is MGK’s first property in LA, as he previously rented a home with Megan Fox in Sherman Oaks that cost $30,000 per month, including expenses. While the couple enjoyed the property, they claimed to have experienced several ghost encounters, which led the singer to find another property for his young family.

On his mission to move away from America, Logan Paul handed over the stunning Encino property to Machine Gun Kelly, who is ready to start a new chapter of his life with Megan Fox. The property is a perfect family home where their children can enjoy the spaces drenched in sunlight or lounge by the pool to enjoy the Californian summer.

READ NEXT: The Most Expensive Castles Of The British Royal Family, Ranked