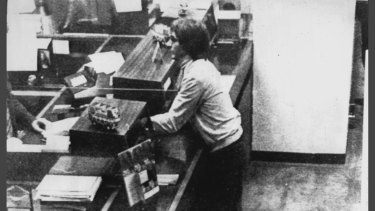 The bandit who escaped with $5112 in a raid on the Queen Street branch of the National Bank.Credit:Victoria Police

Bandits pistol-whipped a bank manager and fired a shot at a security camera in one of three armed bank holdups which netted about $33,000 in Melbourne yesterday.

The manager, Mr Bill Keown, about 50, was trying to unlock a safe for three bandits in the Moreland West branch of the Commonwealth Bank when he was hit from behind.

As the bandits were leaving the bank in Melville Road with about $22,000 one fire a shotgun blast at the camera – but missed.

In another raid, bank union chief Mr Ray Willshire learned firsthand what it feels like to look down the barrel of a shotgun.

Mr Wiltshire, manager of the Glenroy branch of the Bank of NSW and Victorian division president of the Australian Bank Officers’ Association, was bailed up by two bandits who burst into his bank at 2 pm.

Mr Wiltshire, who for several months has pressed for increased security measures in Victorian banks, said: “It leaves you with a sickening feeling in your stomach.

“I want to renew a call made by some 6500 of our members at a rally on June 23 for bulletproof glass and security cameras to be installed immediately in all banks.”

The bandits escaped with $5972 after demanding Mr Wiltshire fill a bag with money.

In the third raid, a bandit held up the National Bank in Queen Street, City, and fled with about $5100.

The man, aged about 20, demanded money from staff. He had a gun wrapped in paper.

The Moreland West and Queen Street holdups were pulled simultaneously – just before the 5 pm closing time.

The metropolitan crime coordinator, Detective Chief Inspector Don Plant, said last night the armed holdup situation in Victoria had reached “serious proportions”. There have been 339 armed holdups in the state so far this year.

He said that from descriptions given, the bandits who raided the Moreland West branch of the Commonwealth Bank yesterday were a new gang.

Two of the bandits are believed to be in their forties. The other was in his early twenties. Two of the men were armed.

One carried a sawn-off shotgun and the other a .45 calibre pistol.

An elderly woman customer was in the bank when the bandits walked in.

“They used abusive and foul language and made threats during the time they were in the bank,” Chief Inspector Plant said.