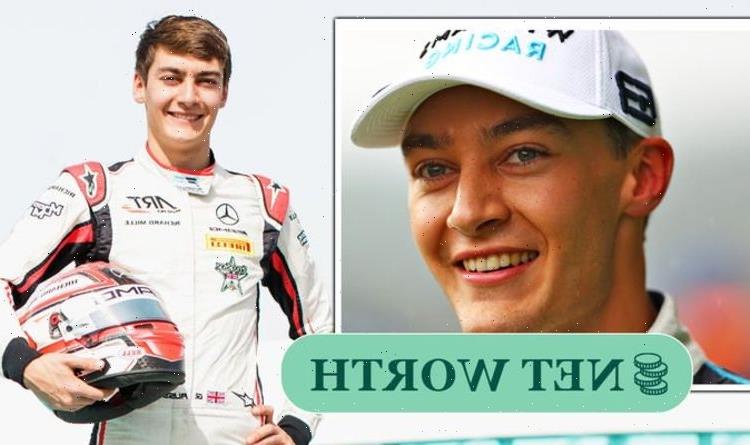 George Russell is only 23-years-old and he is already a big name in the world of motorsport. The professional British racing driver competes in Formula One and is part of the Williams. His car number is 63 and he made his first entry in the 2019 Australian Grand Prix. Next year he is set to join Mercedes alongside Lewis Hamilton, but how much is George worth?

According to celebrity sites, George Russell’s net worth is around $1 million, equivalent to £700,000.

Fox Sports reported that George’s yearly salary is a whopping $1.2 million (£876,000) and while that seems a lot of money, compared to the richest racing car driver Lewis Hamilton who’s annual salary is around $76 million (£55.5 million), George has some way to go in the industry.

But, should George get a few more wins under his belt and impress sponsors, his income will increase through brand endorsements and investments.

He is the youngest child of father Steve and mother Alison, having two older siblings, a sister Cara and older brother Benjy.

At the age of seven, George took up karting and spent much of his time around karting tracks.

His brother Benjy is also involved in competitive karting.

Growing up in Wisbech, Cambridgeshire, George was educated at the Wisbech Grammar School before moving to Milton Keynes at the age of 18 to be closer to racing teams.

George began karting in 2006 and progressed through to the cadet class by 2009, becoming MSA British champion and British Open champion.

George then graduated to KF3 class in 2011, winning the SKUSA Supernationals title and becoming  CIK-FIA European Championship, a title he successfully defended in 2012.

In his final year of karting in 2013, Russell finished 19th in the KF1 CIK-FIA World Championship.

In 2014, George made his single-seater debut racing in the Formula Renault 2.0 Alps championship.

He originally signed to race for Prema Powerteam, before making a last-minute switch to Koiranen G and despite missing a round through illness, he finished fourth in the championship, taking a single podium finish at the Red Bull Ring.

George also contested win two rounds of the  Eurocup Formula Renault 2.0 championship; the Moscow round with Koiranen GP before switching to Tech 1 Racing for the final round of the season at Jerez.

Racing as a guest entrant, he won the final race of the season after starting from pole position.

In February 2015, George was announced as one of the 12 drivers selected to join the British Racing Drivers’ Club SuperStars programme, the youngest-ever recruit to the scheme.

He graduated Formula Three later that year and took his first race victory in the opening round of the season at Silverstone.

George then switched to Hitech GP for the 2016 season, scored two victories and finished third in the standings before singing with  ART Grand Prix for the 2017 GP3 Series season.

In January 2018 Russell was confirmed as a driver for ART Grand Prix for the 2018 FIA Formula 2 Championship and he was also confirmed as the Mercedes‘ reserve driver, sharing duties with Pascal Wehrlein the following month.

As for his first F1 career points, after singing a multi-year deal to drive for Williams team in 2018, George continued to drive for them in 2020 but suffered several defeats.

Then, that same year, George stood in for  Lewis Hamilton at Mercedes for the 2020 Sakhir Grand Prix, following a positive coronavirus test result for Hamilton.

Despite some mechanical issues, George finished in ninth place and earned his first three World Championship points, two points for ninth and one for the fastest lap.

After Hamilton was declared fit to compete, George returned to Williams and raced several times for them this year.

However, George is due to going Mercedes in 2022, replacing Valtteri Bottas and joining fellow Briton Lewis Hamilton.

According to firstsporz.com, George Russell is dating Seychelle de Vries.

Seychelle de Vries is the sister of Nyck de Vries, a Dutch racing car driver and former World Karting champion who won the F2 title with ART Grand Prix – a year on from losing out to teammate George.