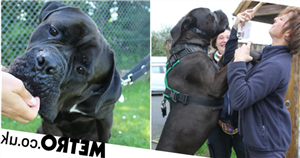 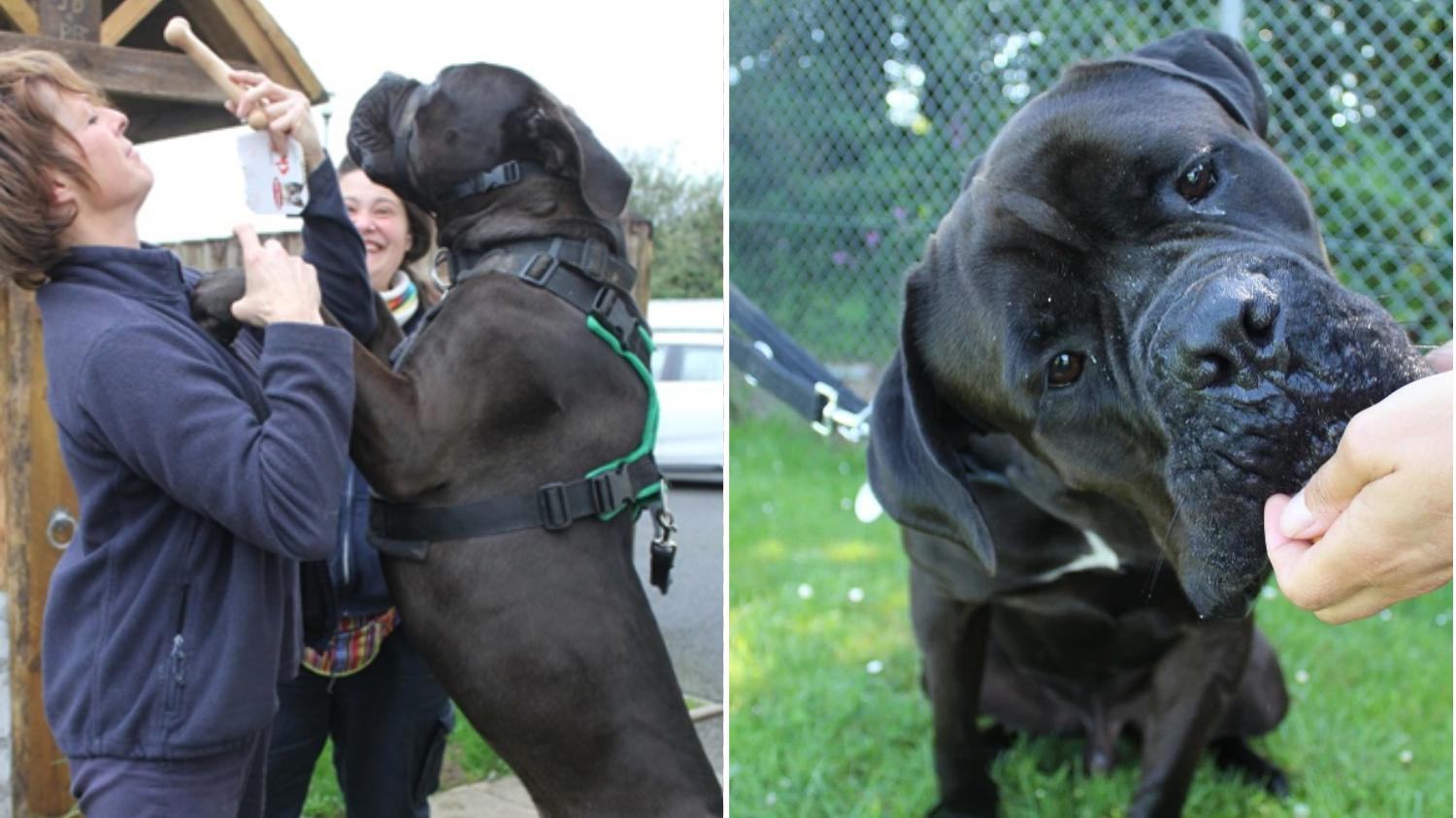 Sweet Basher, who stands 6ft tall when he’s on his hind legs, spent over two years struggling to find a home due to his huge size and anxieties over the wider world.

He arrived in the care of The William and Patricia Venton Animal Centre – run by RSPCA Cornwall Branch – in St Columb in July 2021 after spending a whopping 18 months in other rescue centres, waiting for the right owners to come along.

But now, at long last, Basher, who weighs an impressive 60kg (9st 6lb), has finally found the rural home that suits his size and emotional needs.

Sammy Howard, who works for the charity in Cornwall, said: ‘Basher was rescued in January 2020 and moved around rescue centres as we struggled to find adopters who were willing to take him on due to his size and his challenges.

‘When he stands on his hind legs he’s almost 6ft tall – meaning he’s taller than most of the staff looking after him.

‘While he’s a big lad, he’s an absolutely soppy gentle giant, and we all truly fell in love with him during our time with us, but we were so desperate to find him the perfect home.’

After a total of 32 months in the care of the charity and enduring the heartbreak of at least three failed adoptions, Basher finally met his perfect match.

In September, Basher moved into his new home at last, which is located just mere miles down the road from the rescue centre.

Basher’s new owner, Anna, met the big fella at the centre multiple times, taking him for walks so he could get to know her.

She said: ‘I didn’t realise at that point how desperate they were to find him the right home.

‘I spoke to the behaviourist and asked if he had a good soul because I could work through any other problems. She said, at that moment, that she knew we were meant to be together and that he’d be okay.

‘I could tell that he just needed someone to give him a chance and to give him time to settle into a new home and a new way of life.’

Anna first spotted him on Facebook after a friend who works at the rescue centre shared it online.

Anna said: ‘I’d just moved into a new home and had been thinking about getting another dog.

‘I could see it working here for Basher as we’re very isolated and rural, and we have more than five acres.’

Now, Basher’s family includes Anna, her 14-year-old son, their two other dogs and a foster dog.

Anna said: ‘Basher is so gorgeous and is doing so well; it’s lovely to see. He is so adorable; he gives the best hugs.

‘He’s incredibly sweet and he’s such an asset to have as part of our family; he’s really just loving life now.

‘The other day I looked out of the window to see him sleeping in the grass in the sunshine; he looked so relaxed, and I wondered to myself when the last time was that he felt so content.’

The pooch had been rehomed before but struggled to settle into a domestic setting, and destroyed furniture. Now, he prefers to live outside and sleep in well-kitted-out stables.

Anna said: ‘The dogs live out in the stables and barn where they have carpet and their own sofas, although Basher has already destroyed three! He really suits living outside and he’s now finally learning how to be a dog. He’s picked up a lot from my other dogs and I’m just giving him the space he needs.

‘I come from a farming background and worked with cattle in the past, so his size didn’t phase me; he’s certainly smaller than a cow. And I’ve been used to having dogs who live outside on the farm, so he really suited our lifestyle.

‘He still has challenges; the other day he heard glass being thrown into the recycling lorry, and he was terrified. I took him into the barn, his safe space, and we had some fun to distract him.

‘He’s got a lovely life here; he has lots of space and land to explore, the other dogs to mix with, he never wears a lead, and free-roams around the fields as he pleases. He loves to sit in the grass, watch the world go by, and spend time with us – preferably getting his back rubbed.’

Even though Basher is much happier now, he still has a bit of a way to go before his peace of mind is fully restored.

‘I don’t know if he’ll ever make it into the house,’ said Anna. ‘He comes into the kitchen but that’s as far as he gets. He’s getting used to normal things like the dishwasher being unloaded. It’s a gradual process, but he’s already come on so much.

‘I have to watch him, read his behaviour and interpret what he needs. But we’re learning together, and I think we’ll get there. I can see why he’s been difficult for people in the past, I think he’s missed out on so much in his early life, and he gets over-excited and frustrated.

‘But so far he’s proved himself at every hurdle we’ve faced, and I feel like he’s really trying. I’m so proud of him, and I’m so pleased he’s here with us.’