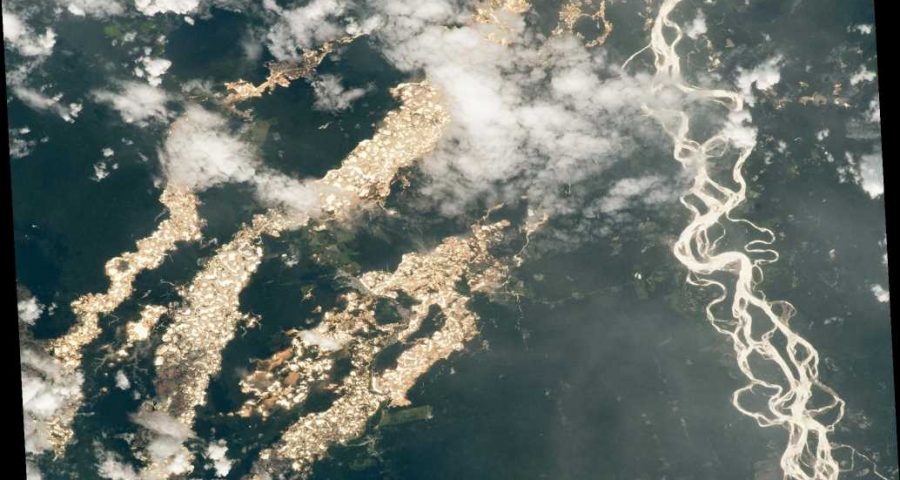 A captivating image of the Peruvian Amazon from space has become a striking reminder of the desolation caused by gold mining in the region.

The breathtaking photograph, captured by a NASA astronaut aboard the International Space Station, shows two parallel yet very different rivers — one natural and one man-made — winding through what was once a thriving rainforest. Now, however, rampant illegal mining has taken over much of the South American nation’s gold reserves, and destroyed over 250,000 acres of forest in the process, according to environmental reports.

The picture’s left side shows the spindly Inambari river, but it’s the scene on the right that catches the eye with a meandering tract illuminated by miles of gold prospecting pits.

The rare picture required cloudless weather conditions, and for the sun to cast its light down at a very specific angle, called the “glint point,” to create the brilliant effect.

The independent miners, called garimperos, are responsible for the luminescent belt across the iconic Amazon rainforest. In search of better lives, they have descended on Madre de Dios in Peru, where a gold rush has taken hold since the 1980s, prompted by a price surge of the precious metal. The country is the sixth largest producer of gold in the world. In 2017, one study estimated that some 155 metric tons were removed from the Peruvian Amazon.

Their overzealous pursuit of wealth has left in its wake a cemetery of wildlife and tropical vegetation, and earth polluted by mercury — a by-product of the gold extraction process. So rich was the silt that one could forge as much as 10 to 15 grams of gold per day. Gold is priced just over $1,800 for an ounce, according to Nasdaq, or about $64.50 per gram.

For years, the lawless La Pampa, a hub of the hostile illegal mining industry, was known to support “prostitution, modern-day slavery and organized crime,” and had long been largely inaccessible to outsiders, according to a 2020 report in Nature. Scientists and land authorities could only watch from a satellite’s distance as huge swaths of rainforest were mowed down for surface prospecting.

In 2019, the Peruvian government declared martial law in the region, expelling tens of thousands of miners who relied on that work to earn their living. Since then, conservation biologists have begun working with Peru to investigate which tree species can survive the now-harsh ecosystem.