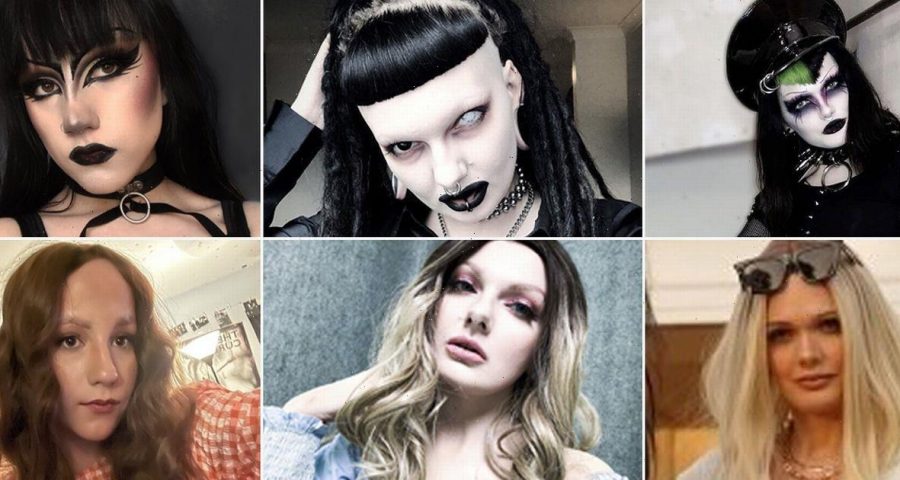 The gothic style is one of the most recognisable fashion trends in the world.

But some goths decided to see what they'd look like if they had a "make-under" and ditched their striking signature looks.

And they left friends and family shocked by becoming unrecognisable after transforming just for a day.

Here, the Daily Star takes a look at some goths who used professional makeup artists to look like beauty queens and the girl next door.

One mum even went the opposite way – and ditched her barbie loving outfits to become a goth just like her daughter.

Self-described demonic metal goth Shanny Webb ended up shocking herself when she dressed up as a girly girl earlier this year.

The 25-year-old had her 20 tattoos covered up and her gothic eye contacts were removed before she was glammed up with pink eyelashes and sparkling lip gloss.

After the dramatic change, she said she looked more “evil” than before.

And she told the Daily Star: “I didn’t recognise myself. It took hours to do because of all my tattoos.

“My first reaction was a bit like, 'what the f***?' I thought I looked quite evil compared to my normal self.

“In fairness I didn’t actually think it was awful, I didn’t hate the look, it was just totally different to what I go for.

You can read her story in full here.

Victoria Lovelace left her husband speechless when she ditched her black clothing for a glamorous girl next door look.

She has real life vampire fangs and has been dressing in all black since she was a teenager.

The beauty entrepreneur told the Daily Star: “My husband got pretty shocked.

“He prefers me as a magical vampire princess for sure. But he loves me the way I am for my heart and soul.”

Jordan Bovee has proudly dressed as a goth since she was a little girl.

But the 27-year-old took part in a huge transformation to look like a glam beauty queen – just like her sister.

She wore a tiara with her glittery silver dress and swapped the blue lipstick, dark eyeshadow and white makeup for warmer tones.

Afterwards she told the Daily Star: “I was completely taken aback seeing myself like that.

“I expected to recognise myself at least a little bit with my natural features, but I looked like an entirely different person

“It almost scared me a bit since I've grown so used to what I look like.”

Teenager Casey Sugrue underwent a similar transformation but ended up hating everything about her new appearance.

She did the experiment to see what it would be like to look similar to her pals – but instantly regretted it.

The 18-year-old is often told she would “look better normal” but the change just made her appreciate her glamour vampire goth style even more.

Afterwards she told the Daily Star: ““I was completely shocked when I saw the transformation and it was so bizarre to see me as something so opposite to who I am.

“I didn’t even recognise myself and there was genuinely nothing I liked from the transformation.”

OnlyFans star Tracy Kiss also had an extreme transformation – but the opposite way.

The Barbie-loving mum turned into a grunge goth for a day to look more like her teenage daughter.

And the former Page-3 girl, who usually lives in pink hotpants and crop tops, was happy with the outcome.

She told the Daily Star: “Seeing myself transformed into a goth was such a shock but I actually enjoyed it.

“You don’t often get to see yourself as the opposite of what you are and I’ve actually introduced more black into my wardrobe now because of it.”