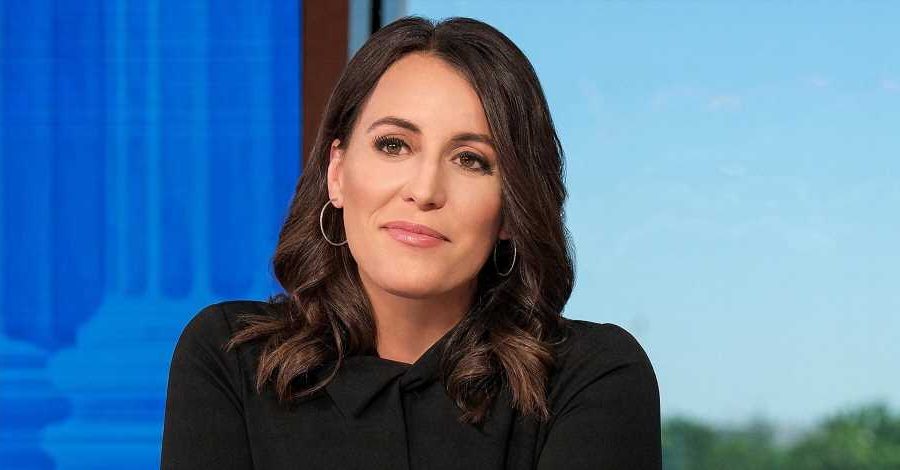 In a segment of Hallie Jackson's new show, Hallie Jackson Now, the NBC News and MSNBC political journalist sits outside talking to her producer about the "deep shame" she's been working through in regard to her mental health. The segment was shot at a wellness retreat in North Carolina, which Jackson attended in both a professional and personal capacity. For the show, she interviewed other attendees — including healthcare workers and a man who lost three family members in the Surfside Condo collapse this summer — who were present to process burnout and grief. But Jackson also attended sessions to work through her own mental health issues — and the set up put her in an unusual position, one in which she's both reporting as a journalist, feeling as a human being, and navigating between the two roles.

Jackson's new daily primetime show launches today on NBC News NOW, the network's two-year-old streaming service, and with it Jackson attempts to strike the balance — to create an accessible, engaging show that  reconfigures how people relate to and engage with news, and to decide how and when to bring her personal life into the stories.

Hallie Jackson Now covers general news, Jackson says, not politics. Though viewers know her as a senior Washington correspondent for NBC News and host of Hallie Jackson Reports on MSNBC (Jackson also co-hosted a Democratic presidential debate in 2020), the new show has expanded her scope of storytelling. She searches for stories that have flown under the radar in the hustle of political coverage, or for a different way to talk about the big story of the day. Coverage spans national and international news, culture, sports, and tech — including stories on "virtual influencers" (influencers that have millions of followers but aren't human), and "stalkerware" apps, the invasive software that helps abusive spouses monitor and control victims.

"This is the news for people who like the news," Jackson tells InStyle during the last day of rehearsals ahead of the show's premiere, which she describes as "awesome and terrifying." Part of the goal of the show, she says, is talking about the news on air with the same energy and in the same way Jackson talks with correspondents, producers, and reporters on the scene. The show is broken into segments that allow Jackson to dive deeper into specific stories. Originals, for example, features a story you're not seeing anywhere else, containing original reporting from Jackson or another correspondent. Then there's Backstory, one of Jackson's favorite segments, in which reporters show how a story came together, taking audiences behind the scenes of how it was created and what gets included. In tech rehearsal, journalist Antonia Hylton joined Jackson to talk about her exclusive story on James Whitfield, who was suspended from his job as the first Black principal of Texas' Colleyville Heritage High School for emails in which he insisted on the existence of systemic racism. (He was accused of pushing "critical race theory," the misappropriated catchall often used by conservatives.)

Jackson spoke to Antonia about how she came to the story, who she spoke with, who wouldn't talk to her, and where the story is headed next. The segment offers new context, and is another way to tell an important narrative. Still, Jackson is quick to clarify the show isn't media analysis; it's about giving reporters and correspondents — and their stories — a chance to shine.

Jackson has long known that she lives and breathes Washington politics, but the new show, she says, has given her the chance to try different ways of telling the story.

"We are really trying to figure out how we can peel back the curtain a little bit, tear down that fourth wall," Jackson says. "The idea is: let's talk like normal human beings, just have a conversation the way that normal humans would actually speak and talk."

But for Jackson, part of drawing back the curtain on news means figuring out what it means to reveal parts of herself along the way, something she's frank in acknowledging is not a place of comfort for her. Topics like mental health are inherently political, profoundly impacted by political policy and who has what resources. They're also inherently personal, and sometimes that makes Jackson bristle. But the streaming space feels more intimate, she says, and it feels more natural to talk about her own experiences.

There's still a line she's not willing to cross, though. In the segment on mental health and burnout, parts of the sessions Jackson participated in were too personal for the show to air. "I come out of one of these sessions and my face is streaked with tears and my producer is like, 'Oh my god, are you OK?'" Jackson says. In that moment, she reevaluated her role, telling herself "OK, let me not be a journalist for this hour. I'm going to be like a participant here." She reiterates that it's uncomfortable, despite a retreat leader's private reassurance that if she can bring her authentic self to the space, her journalism would be better as it related to the topic. "I thought that was really powerful because I am not somebody who ever really feels OK connecting my personal life to my journalistic life," Jackson adds.

"My own sort of mental health issues predated the pandemic," she adds. Her network was supportive, she says, but "I felt really ashamed of talking about it. I still do."

As Jackson tells it, she's a type-A go-getter, something that has served her well professionally. That mentality became problematic in her personal life around the time she was the Chief White House Correspondent leading coverage on the end of the Trump presidency, the election, and the transition. It didn't help that her daughter, Monroe, was born in March 2020, right as the world began shutting down due to the coronavirus pandemic and right before Jackson embarked on coverage of 2020 presidential campaign events and conventions. "It was, in some ways, agonizing to feel like I was going through a lot of this in my own personal life, but then still working 18 hours a day and doing the newscast, all of those things that I love doing," she says.

She recalls a story she did in the aftermath of the Jan. 6 insurrection, interviewing  Rep. Dan Kildee, who opened up about his PTSD from that day. When she followed up with him, she heard he'd gotten a mixed response to the interview: Some people thanked him for sharing his story, but a vocal minority also attempted to shame him for struggling. "And to see that, it just made me realize that we've come a long way as it relates to mental health coverage, but we still have a really long way to go," Jackson adds.

While she's excited for the new show, which comes in addition to her reporting for nightly news and the TODAY show, she recognizes it all adds up to time out of her day. There are moments she looks at her daughter and thinks, as every working parent does, about whether she's spending enough time with her. She misses her.

About a month and a half ago, Jackson called a timeout: She wanted a break before the show launched, which the network supported. "It's tough to be at the top of your game professionally if you're having a hard time personally," she explains. "Listen, I don't know what's going to be like in 10 years when people are talking about mental health." All she knows is that perhaps she can do a bit to open those doors, to commit to covering it and talking about it. "Then maybe those little steps will add up to make a difference down the road."