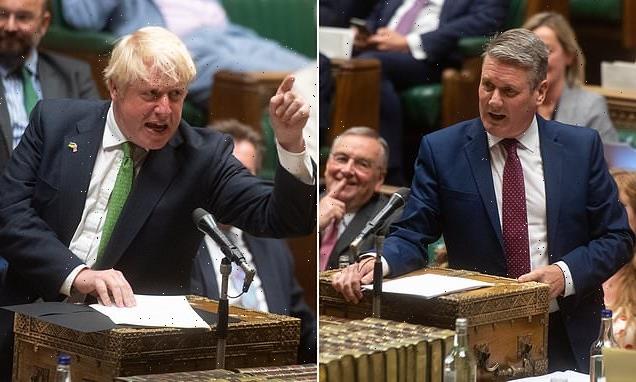 Wring out your wet hankies and raise those Zippo lighters high up in the air. Boris Johnson: The Farewell Tour came to the Commons yesterday and the headline act didn’t disappoint.

For just shy of thirty minutes we were treated to one of those typically frenzied turns, full of flare and flamboyance with a litany of whizz-bang theatrics.

He punched, he pointed, he clenched the clammy air. Goodness, those gesticulations! It was like watching a sozzled lollipop lady.

By the time those heaving buttocks came crashing back down onto the green leather with an almighty great thud, the crowd behind him were already yelling out wildly for more.

Promoters had warned this was a ‘one night only’ performance. They always say that of course. This time, though, I fear they might have meant it.

Mr Johnson’s swansong came after the Government faced a no-confidence vote – rare things. Strange then that attendance in the chamber was so spectacularly poor. Two-thirds full at best. 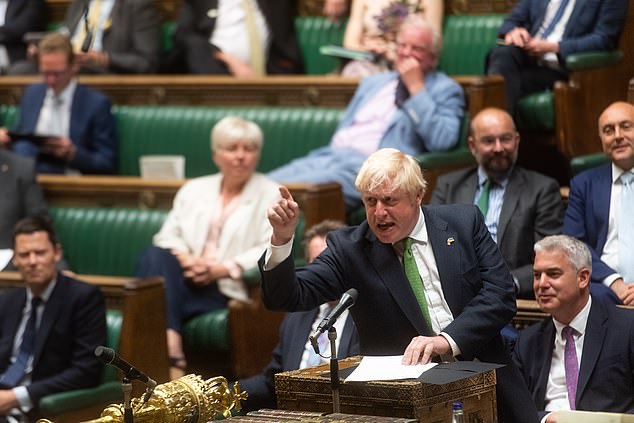 Boris Johnson: The Farewell Tour came to the Commons yesterday and the headline act didn’t disappoint

Apart from Liz Truss, none of the other leadership candidates were present. Not even that old sourpuss Theresa May bothered to show for one last gloat at the gallows.

The Prime Minister claimed his Government had been ‘one of the most dynamic of modern times’.

It was a pity that his colleagues had jimmied him out of Downing Street before he could finish what he started. But them’s the breaks etc.

‘I will have more to say about events of the past few weeks and months in due course,’ he remarked ominously. Hmm. That should help pump up the bidding when the memoirs go up for auction.

He reminded the House of his achievements. Brexit, naturally. Plus his ruthless crushing of Labour at the election when he sent a ‘great blue Tory ferret so far up their left trouser leg they couldn’t move.’ Loud cheers.

Incidentally, I’m not sure if you caught Ange hosting her own phone-in show on LBC yesterday. No? Well, let’s just say she’s unlikely to be giving Jeremy Vine any sleepless nights.

To the rear of the chamber sat Jeremy Corbyn (Ind, Islington N) fiddling with his telephone. It was almost three years ago, on another sizzling hot July afternoon, when Boris made mincemeat of Mr Corbyn as he made his debut as leader.

Perhaps it was out of nostalgia that Boris granted the old booby a rare intervention.

Also allowed to chip in was Michael Fabricant (Con, Lichfield). He pondered whether his party might regret dumping Johnson the same way Labour came to rue booting out Tony Blair.

Some of the Tory MPs who turned on him only days ago now nodded in agreement. In Parliament, sentiment always trumps hypocrisy.

Behind the PM, his Parliamentary Private Secretaries, Joy Morrissey (Beaconsfield) and James Dudderidge (Rochford) looked forlorn. Northern Ireland minister Conor Burns was also there, all weary around the eyes. Perhaps it was just the sight of their departing boss on such brilliant form.

Boris by now was in full swing. Seeing his opponents so riled made him fizz with delight. Every now and then he would turn and shoot his colleagues a toothy grin. He was enjoying this! 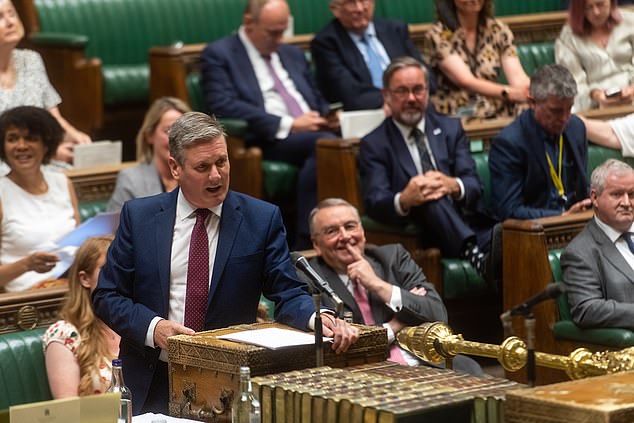 He mentioned his recent excursion on a Typhoon fighter jet, where he had performed a loop-the-loop before handing control to the pilot.

He would now have to do the same once his successor was chosen. Regrets? He had a few. Too many to mention. But mention them he had no intention of doing.

Even by Sir Keir Starmer’s standards, the response he mustered was quite astoundingly poor.

Sir Keir might have found a few courteous words to say but was determined not to allow his opponent a moment.

Graciousness is clearly not part of his already-limited skills repertoire. ‘What a relief for the country they finally got round to sacking him,’ he announced, voice as acidic as a crab apple.

He described Johnson as a ‘vengeful squatter mired in scandal.’

Boris just sat there, arms folded, shaking his head. He will not miss Sir Keir’s moral lecturing one bit.

As SNP Commons leader Ian Blackford rose to speak, the PM considered that as good a moment as any to make his exit.

He turned and nodded to his front bench before disappearing quietly behind the Speaker’s chair. And that was it. C’est fini.

Will he back by popular demand? Unlikely. But then again, stranger things have happened.