The three amigos were back, slack-shouldered, heavy-footed, each bearing new doses of grief and gloom.

Yesterday’s coronavirus briefing was a strange thing. We were told that little had changed and yet were put on notice that, soon, everything might.

Green shoots? Chinks of light? Put those firmly out of your mind for now.

Once again, Boris resembled a confused driver, lost in the fog, frantically trying to de-mist the windscreen. 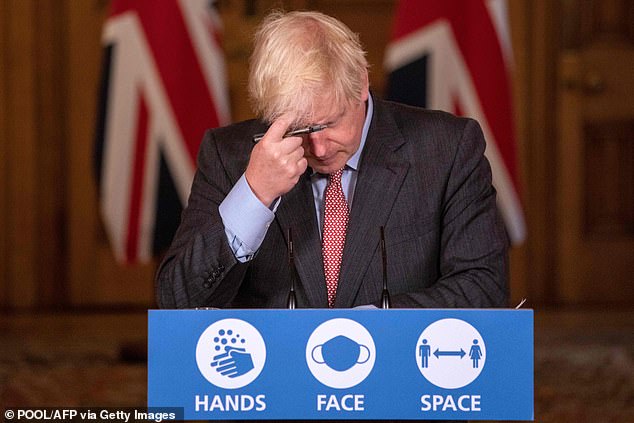 Once again, Boris resembled a confused driver, lost in the fog, frantically trying to de-mist the windscreen

In the car with him were Chris Whitty and Sir Patrick Vallance, still doggedly refusing to entertain doubts about their map-reading skills.

In a sign as to how much we’ve regressed, we were back to starting with death figures. Boris announced there had been a further 71 mortalities since yesterday. What age demographic were these unfortunate victims? How many underlying conditions did they have?

Those lecterns the amigos stand behind are now covered in those ‘hands, face, space’ logos. They are accompanied by off-putting diagrams of people washing their hands of the kind posted in public lavatories.

One of the biggest irritants of all these safety measures is the bombardment of pointless messages. Walking into a shop now, with all its arrows and ‘keep your distance’ stickers is like being in a kindergarten.

Boris had come armed with fighting talk, doling out gee-ups like a corner man in a spit ‘n’ sawdust boxing gym.

‘There is only one way out of this,’ he told us. He castigated those who wanted to ‘give up and let the virus take course’. ‘We must stick together,’ he insisted. ‘Not throw in the sponge.’ Most starkly, he warned that ‘if the evidence required it’ he would ‘not hesitate to take further measures’.

Once, when Boris used to talk about locking people up indoors, he would look like a bashful toddler. No such apologies these days. A sign perhaps of how deeply those scientists have sunk their chompers into him.

Compare such negative talk with the boosterism of the Bank of England’s chief economist Andy Haldane, who earlier urged people to get positive about the economy. ‘Now is not the time for Chicken Licken economics,’ he warned.

Top banana, Haldane. Fine cricketer. Snappy dresser. Whisper it, but there are some in Threadneedle Street who reckon he would have made a better successor to Mark Carney than Andrew Bailey. 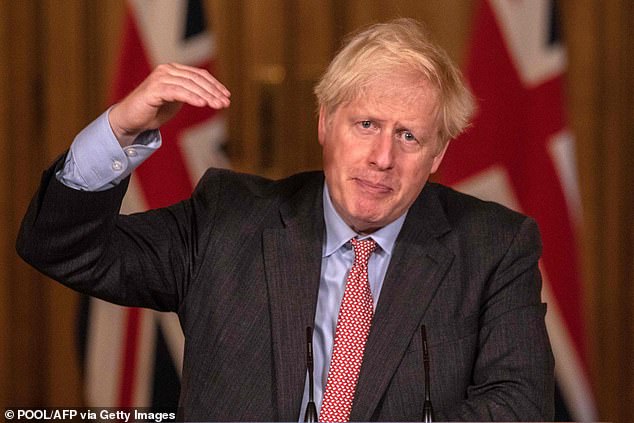 ‘There is only one way out of this,’ he told us. He castigated those who wanted to ‘give up and let the virus take course’. ‘We must stick together,’ he insisted. ‘Not throw in the sponge’

Professor Whitty, he of the sepulchral tones and aggressive toe-caps, took control of the slide machine.

He showed us graphs illustrating how dire things were getting again, the faintest hint of triumph in his voice.

One chart, at least, showed infections among children remained stagnant. Good: no need for schools to close.

Vallance was his usual barrel of laughs. ‘We don’t have things under control at the moment… We are definitely heading in the wrong direction,’ he said. ‘Hospitalisations are going up, ICUs are going up, deaths are going up…’

And to think I considered that Harold Shipman documentary on BBC2 this week to be depressing.

Earlier at PMQs, we had witnessed an uncharacteristic display of anger from Speaker Sir Lindsay Hoyle.

The description ‘mild-mannered’ does do justice to the cheery Lancastrian. Whenever Sir Lindsay oversees a session, geniality oozes from the chair.

But when he rose and uttered the words ‘I wish to make a statement’, it was obvious he was not about to pour honey in the PM’s ear. Sir Lindsay bellowed that the Government’s introduction of sweeping powers to deal with the crisis had been ‘totally unsatisfactory’, showing ‘total disregard for the House’.

Now he was ‘looking to the Government to rebuild the trust with this House and not treat it with the contempt that it has shown’.

When he did, it hit home like a howitzer.