Could this be the first time in the 92-year history of the Academy Awards that a foreign-language film wins best picture? Bong Joon-ho’s Parasite, a surreally funny film about class divisions in modern Korea with a few lashings of K-film’s characteristic uber-violence, has been an international smash since winning the Palme D’Or in Cannes last May. At the annual pre-Oscar lunch, the showbiz press pack’s more assiduous tealeaf-readers noted that Director Bong received more applause when he came on stage than any other award hopeful, suggesting that not only Quentin Tarantino, who has been championing Bong for years, thinks his film is the bee’s knees. Against the promise of these omens, however, is the hard evidence from the past. Only 11 foreign-language films have ever been nominated as best picture. None has won. One French film, The Artist, won in 2011 – but it was a silent movie that was, moreover, reassuringly set in Hollywood. Not that Bong Joon-ho himself is anticipating disappointment; he is reportedly more bemused than anything else by the Oscar campaign process. Asked whether he found it odd than no Korean film had been nominated before, given the heft of the Korean industry, he gave a typically wry reply. “It’s a little strange,” he said. “But it’s no big deal. The Oscars are not an international film festival. They’re very local.” 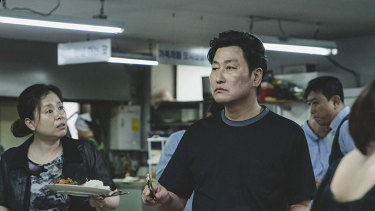